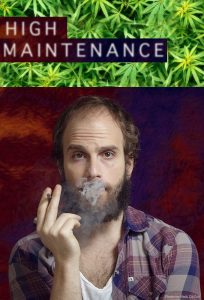 We can get 2018 started on a high note when The Guy and his customers return to our HBO screen. A premiere date has been set for HIGH MAINTENANCE. It will return for its ten-episode second season FRIDAY, JANUARY 19. It will play for a half hour beginning at 11:00pm.

From the unexpected and offbeat to the predictable and mundane, HIGH MAINTENANCE provides a glimpse into the daily routines of a diverse group of New Yorkers and how they light things up. Ben Sinclair stars as “The Guy,” a nameless pot deliveryman whose client base includes an eccentric group of characters with neuroses as diverse as the city. Season two credits: Created by Katja Blichfeld & Ben Sinclair; executive producers, Katja Blichfeld, Ben Sinclair and Russell Gregory; producers, Willy Friedman, Gwen Bialic and Emi Irikawa; consulting producer, Eric Slovin.

As you recall by our coverage, HIGH MAINTENANCE started as a web series of nineteen videos. HBO picked it up and ran a six-episode Season One. In that season The Guy made deliveries to a co-dependent couple, a boring couple, an agoraphobic and other dysfunctional or stressed individuals who all needed a bit of induced mellowing out. All the while our delivery man struggled to keep on the move, meet the issues of supply & demand and keep a stable life and relationship himself.

We can be sure Season Two will offer more of the same, perhaps with some returning characters making a purchase. And by the count above we see that Sinclair’s The Guy will have four additional episodes to do it in. Here is the tease we have been given:

Now that just proved my point. The way that clip is structured we got some sad sacks at the beginning followed by a few stops by The Guy, some stash and some smoking and the next thing you know everybody is suddenly happy. Even someone bumping into the delivery bike doesn’t dash The Guy’s spirits. Hey, when the world goes low, they go high. Are you high & excited for HIGH MAINTENANCE Season Two?