Even though we gave you a strong overview a few days ago we thought we should at least offer a few words about the series premiere of HERE AND NOW. Alan Ball is back with another series filled with some wacky dialogue. He explored life & death and the meaningful relationships along the journey in SIX FEET UNDER and went fantastical and bloody when he bit into TRUE BLOOD. Now he offers another ensemble and their take on making it through life. That philosophy seems to be that the past is gone, the future is unknown and all we have is here and now. Live it.

This family though, by their own admission, sees themselves as a social experiment. How wacky is that and that is not the only offbeat thing about them. But first, let’s see how we get introduced to them all. Father to the brood Greg, is depressed as all hell even after hooking up with his hooker. He dreads the looming birthday party whipped up by worked up Audrey, the 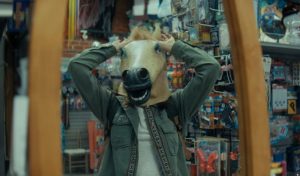 matriarch. They seem so out of sorts and that trickles down to their children. Duc, Ashley & Ramon are adopted and there is Kristen the biological offspring and they all have their issues. Duc, is a “motivational architect”  whatever the hell that is; Ashley is out to treat co-workers like crap and possibly connect with someone other than her husband; Ramon is hallucinating and Kristen is the ‘oddball white kid’ (at right) who is truly oddball on all counts, even after she loses her virginity here.

The only thing I can say about this family dynamic is that I am distracted by it and don’t like it. Is this really what a ‘progressive family’ is? I hope this is some absurd exaggeration to what they are all about because it could ruin this show for me. It is witty writing but quite distracting and, like I said, absurd. For example, the whole idea of the family as a social experiment is just wrong and the notion that one aspect of Greg’s depression is that “they lost the election.” Oh, please. Regardless of what you think of the President, the end of days is not at hand; to get that depressed over it seems (here is that word again) absurd. Just me probably.

Really the only aspect of the storyline so far that I like is Ramon’s mystery affliction. The title of this episode ties into it. The numbers 11:11 appear in a way we would say is coincidental – the time on a wall clock and on a workout machine. But, his last look at the number appears right in the middle of the party and no one else sees it. What does it mean? He begins therapy with a Dr. Shokrani to see if it is mental illness or something more.

Watch the premiere for yourself to get your introduction to the clan, the situation and the mystery. Hopefully, you won’t tire of the absurdity of their depiction & their banter. Hopefully, you will stick it out and see if Greg, Ramon and the others can make sense of the HERE AND NOW.

We will let a few episodes play out before we give this series another post. Disagree with my opinion? I hope you do so we can talk it out in the Comments below.