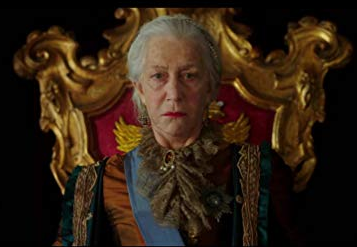 We’ve known for a while now that Helen Mirren was to take on the persona of Catherine The Great of Russia. She does so in what sets up to be a four-part miniseries. Below are some details regarding the work and a recently dropped Teaser. All we wait for now is a premiere date and official Trailer. But, for now, here’s what we’ve got:

Oscar-winner Helen Mirren will lead miniseries CATHERINE THE GREAT as the tumultuous monarch and politician who ruled the Russian empire and transformed its place in the world in the 18th century. The four-part historical drama will follow the end of Catherine’s reign and her affair with Russian military leader Grigory Potemkin that helped shape the future of Russian politics. Mirren, who won an Academy Award for embodying Queen Elizabeth in The Queen, offered her remarks on the project:

“She rewrote the rules of governance by a woman, and succeeded to the extent of having the word “Great” attached to her name.”

This cinematic work is the latest project in the partnership between HBO and Sky (the network behind The Young Pope).

Set against the politically tumultuous and sexually charged court of Russian empress Catherine the Great, who wielded supreme power throughout Russia for nearly half of the 18th century, the limited series follows Catherine towards the end of her reign during her passionate affair with Grigory Potemkin. Amid scandal, intrigue and immense conflict, they develop a unique and devoted relationship, overcoming their adversaries and together serving as the architects of modern-day Russia.

Cast: Helen Mirren as Catherine the Great, the Russian Empress who was strong-minded, independent, brilliantly intelligent and sexually liberated – the definition of the modern woman.

Helen Mirren is now stranger for playing a Queen as she has done so many times including the title character in HBO’s ELISABETH I. As the tease shows this production spared no expense on lavish royal opulence and dramatic battle scenes. We will get you a premiere date as soon as we can but look for CATHERINE THE GREAT sometime yet in 2019.