If Meryl Streep is not good enough for you then how about Helen Mirren? She returns to HBO as well sometime in the future in a joint production about the Russian Queen Catherine. Once again, HBO will team up with SKY UK to create and present the four-part HBO/Sky miniseries event. 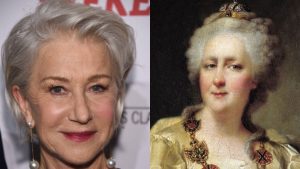 CATHERINE THE GREAT delves into the politically tumultuous and sexually charged court of the most powerful female monarch in history. Catherine wielded supreme power throughout Russia for nearly half of the 18th century; strong-minded, independent, brilliantly intelligent and sexually liberated, she was the definition of the modern woman. Produced by Origin Pictures and New Pictures, the miniseries will follow Catherine toward the end of her reign and her passionate affair with Grigory Potemkin. Amid scandal, intrigue and immense conflict, this is a story of obsessive love. Unable to publicly marry and famously promiscuous, they develop a unique and devoted relationship, overcoming their adversaries and together shaping Russia as we know it today.

Mirren is no stranger to historical portrayals or HBO as she was the title character in HBO’s ELIZABETH I. Now she adds another crown to her head. She stated – “I am very excited by the possibility of embodying a woman from history who grabbed and then wielded great power.” Mirren said. “She rewrote the rules of governance by a woman and succeeded to the extent of having the word ‘Great’ attached to her name.”

“We are jubilant about having Helen Mirren back on HBO, playing the iconic Russian empress and joining this distinguished team of British filmmakers,” said Kary Antholis, president, HBO miniseries and Cinemax programming. Added Cameron Roach, commissioning editor for Sky drama, said, “We’re incredibly excited to announce Catherine the Great and our further association with HBO, in what promises to be a definitive landmark drama.”

It is reported that the production will go before the camera yet this year and we will keep you posted.