Here at HBOWatch, we want to wish all our readers a happy and stress free holiday shopping season. No doubt you’ve probably been thinking about gifts for weeks now, and Black Friday and Cyber Monday have left most of us antsy to get our holiday shopping finished. However, sometimes it’s just not that easy. With literally thousands of options, finding that perfect gift can be daunting task. That’s why we are here to help. Can’t think of what to buy that special HBO fan in your life? We’ve got you covered. From the magical world of Game of Thrones, to the sadistic humor of Kenny Powers, our holiday gift guide has a little something for everyone. Below you’ll find various gift ideas, along with pictures and reviews, which are sure to thrill any HBO fan. This list will be updated periodically throughout the holiday season. So keep checking back for more additions to our shopping guide.

Seasons of HBO Series on Blu-ray and DVD

When it comes to buying a gift for an HBO lover, you really can’t go wrong with a season of their favorite show. HBO has produced some iconic shows over the past 10 years, The Sopranos, The Wire, and Sex and the City just to name few. With this impressive catalog, HBO has done an incredible job over the years releasing their shows on DVD for fans to enjoy. Most DVD sets include special features that give viewers an inside look into the show’s production. Episode commentary, cast interviews, and behind-the-scenes footage are a few of these features you can expect to find when you buy a season of an HBO series. I’m not going to list every show here in this article, but HBOWatch does have a Bluray/DVD page you can look at if you need help finding a particular season. However, I will mention a few recent releases that would be a perfect gift for any HBO fan.

Know someone eagerly awaiting the movie about Vincent Chase and his posse? Well, HBOWatch hasn’t heard much but here is a link to the most recent news. In the meantime, the next best thing we can suggest is to relive the show all over again. To accomplish this, we suggest buying all eight seasons at once! That’s right, those of us who can shell out the bucks can now get ENTOURAGE: The Complete Series on either DVD or Blu-Ray.

Game of Thrones, the first book in author George R.R. Martin’s sprawling fantasy saga A Song of Fire and Ice, serves as the basis for this brawny, lusty series about courtly intrigue and civil war in a sprawling fantasy kingdom. TV and fantasy veteran Sean Bean (The Lord of the Rings, Sharpe’s Rifles) leads the massive cast as the warrior-noble Eddard Stark, who reluctantly assumes the role as the Hand of the King after the mysterious death of his predecessor. This limited edition set offers Blu-ray/DVD Combo + Digital Copy versions of the first season of the series and more. The collector’s box set is adorned with the sigils of the four main houses and comes with a premium dragon egg paperweight, a Blu-ray bonus disc of first episode of season two as well as all of the bonus materials and interactive features from the original DVD and Blu-ray releases.

Super-fans of HBO’s new comedy Girls have more than likely been watching episode of Girls on repeat on HBOGo for the past 6 months now. Soaking in every detail of Lena Dunham’s vivid, realistic depiction of young life in Brooklyn, New York. But for the rest of us waiting for the DVD and/or Blu-Ray release I’ve got some good news for you: you’ll be able to relive your favorite moments along with a ton of extra features on December 11th, just in time for the Holidays. 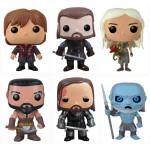 There comes a point in any super-fan’s lifetime when his or her enthusiasm for a fantasy world compels that fan to express that exuberance in the physical world.  If you’re at that point then you simply must consider picking up then adorable new figures by Funko. You may have already seen their [amazon_link id=”B007F1U75K” target=”_blank” container=”” container_class=”” ]Marvel’s Avengers series[/amazon_link] online or at your local novelty store.  These are very similar in nature but feature some of the biggest characters in the world of Westeros. The cast of characters includes Tyrion, Eddard, Daenerys, Kahl Drogo, The Hound and a White Walker!  We’re not sure if Funko is planning on releasing other favorites in the future but we assume that if these sell well this Holiday we could see others (Jon Snow anyone?!). Check out our review for more details.

Want to catch up on some of your favorite ‘Boardwalk Empire’ moments? Maybe you’d like to introduce some of your out-of-the-loop friends to the best show on television. Well ladies and gentlemen, here’s your chance – ‘Boardwalk Empire’ The Complete First Season – the perfect holiday gift for friends and family. Hell, why not, treat yourself to a copy!  We recently reviewed the disc set here if you’re interested in learning more.

Game of Thrones: The Complete Second Season will make its debut on Blu-ray with HBO Select, DVD and Digital Download on February 19, 2013. Each set will consist of 5 discs and packed with extra features. The first season Blu-ray release was jam packed with awesome cast interviews, histories of Westeros, and behind the scenes. The follow up to Season One will have all this and more!  Not in time for the holidays but we’re sure your favorite Game of Thrones fan will appreciate it.

Eastbound and Down Soundtrack

The Kenny Powers saga may be on hold but that doesn’t mean we can’t rock out to some of our favorite ‘Eastbound’ moments. Complete with classic monologues and an arsenal of badass music. The soundtrack takes us back to some of the most legendary moments in the Kenny Powers chronicle, from showdowns with arch-nemesis Ashley Shaffer to some of the “Powerisms” this show it known for. As the soundtrack jams to Lil Whyte or Black Betty or Lee Hazelwood, we begin to remember the highs and lows of this epic journey. This album will have the Eastbound fan in your life cruisin’ and boozin’ with Kenny Powers through the Carolina country, riding free on a leopard-striped jet ski or bumping out a fat Hollywood line.

The Lands of Ice and Fire

The best maps available until now have been online and not printable, or in the books themselves. Until now. Put together by the man himself, George R.R. Martin brings us this collection of maps and it is above and beyond any fan’s dreams. The format in which the maps are stored is brilliantly stunning. It’s almost a novel in itself and a perfect companion piece to the A Song of Ice and Fire book series.  Check out our review of the book for more info.

Inside HBO’s Game of Thrones

Written by script-writer Bryan Cogman, Inside HBO’s Game of Thrones gives fans an exclusive, behind-the-scenes look at how the series brings George R.R. Martin’s beloved characters and powerful storylines to life. The 192-page book features hundreds of vivid color photos portraying action both on and off set, concept art, costume and set designs, as well as interviews with key members of the cast and crew. What the book does best; however, is tell how Dan Benioff and D.B Weiss’s incredible vision of turning the ASOIAF series into a television show became a reality. Additionally, a spectacular collector’s edition has also been released and includes the book, scrolled maps, and an artist’s portfolio featuring never-before-seen storyboards. All housed in a lavish, gold-stamped case. Here’s our full review for reference.

Any fanatic will be excited when to receive this True Blood inspired cookbook. Even if they aren’t a fan of cooking, it’s still fun to make some of the recipes as seen on the show. There are legitimate recipes from items shown in True Blood. For example, what did Sookie order the first time she went to Fangtasia? A Gin and Tonic. On page 40, there is a recipe for that drink along with a preface from Sookie recalling her experience that night at Fangtasia. Although another recipe is not credited as Gran’s Pecan Pie, there is a recipe for one as one might expect due to the prominence the pie played in Sookie mourning the loss of her grandmother. This cookbook will make a great holiday gift for any bloodsucking TB fan.  Here’s our review.

Most great works of TV or film usually have an excellent score behind it, and Game of Thrones is no different. While soundtracks frequently serve the purpose of helping to create the mood of a particular scene, the music from Game of Thrones takes the listener on a wild ride through the pages of George R.R. Martin’s novels themselves. From compositions that reflect the personalities of main characters, to themes that represent various locations, the music connects with fans in much the same way the series does. Literally a perfect gift for any music lover and fan of the show! Soundtracks for Season One and Two are available now. Check out at our review to read about what they have to offer. 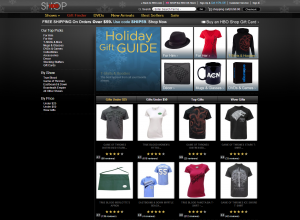 In addition to our own holiday shopping guide, HBO has set up a way to navigate the HBO Store in order to find the perfect gift. The site features categories to browse by product type or show, as well as offering daily promotions so shoppers can get a good deal. They also offer Gift Cards in case neither guide helps you decide on a gift. Be sure to sign up to receive e-mail updates while you’re there. HBO has been sending out daily promotions and you might miss out on something if you aren’t registered. 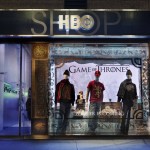 In addition to the online store, HBO has a brick-and-mortar retail location in the same building as it’s official headquarters. Located on the Avenue of the Americas in Manhatten, NY; the HBO Shop is currently decorated with a Game of Thrones themed window display highlighting the hottest merchandise for this holiday season. If you live in Manhatten, or planning on visiting the area, it’s definitely worth a trip to check out what this store has to offer.