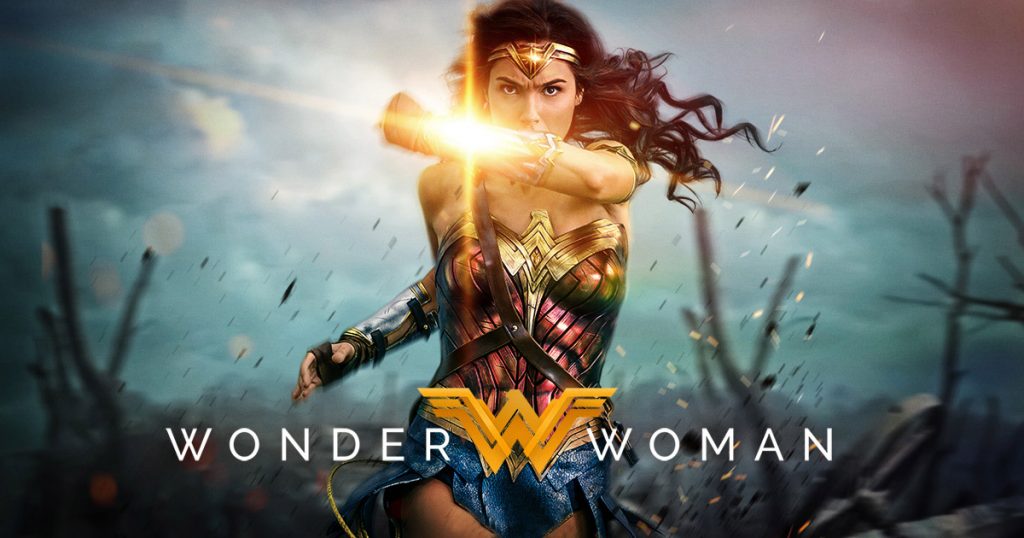 Diana. Woman. Goddess. Warrior. Leader. These were my initial reactions to watching Wonder Woman. After all, I had read and heard so many amazing things about this movie, so I couldn’t wait to give it a go. It did not disappoint. I grew up with watching the original television series with Lynda Carter. I think that Gal Gadot was a worthy successor to the iconic role. GIRL power!

The movie starts with a modern-day Diana as a museum curator when a picture is sent to her from an associate. You clearly see Wayne Enterprises on the letter, reminding us we are connected to the DC Comics world. Diana peers at the picture of her WWI exploits and memories come flooding back to her. So, this movie is a flashback for her.  As a young child and well into her teens, she was trained to fight, to defend her comrades and to take her place amongst the women of Themyscira. Even though the islands of Themyscira are beautiful and lush, their past history is terrifying: Ares, the God of war, waged destruction and wanted to destroy all humankind. A little wrinkle in this is that Ares is Zeus’ own son. All who fought against Ares died and Zeus was forced to kill his own. Zeus left a weapon, ‘Godkiller’, for the women of Themyscira to keep them forever protected – because that wasn’t the last of Ares. Diana is seen forging a strong bond with her aunt, Antiope (Robin Wright) and is very well trained in the art of war and combat, thus the beginning of Diana’s destiny. More after the trailer –

Years later – at the end of WW I, Diana saves an American pilot, Captain Steve Trevor (played by Chris Pine) from drowning. An all-out beach front slaughter takes place – when German soldiers and ships arrive. Alas, arrows and knives are no match for bullets. Antiope takes the bullet that was meant for her niece. However skilled, the guns make quick work of the Amazonian women and before you know it, the only two people left on the beach are Diana and Steve Trevor. Queen Hippolyta (Connie Neilsen) arrives too late and is devastated to see the loss of life. Captain Trevor is questioned for his presence at the melee using the icon Golden Lasso and it’s revealed he’s a spy for the Allied forces. Trevor has in his possession a book from a high 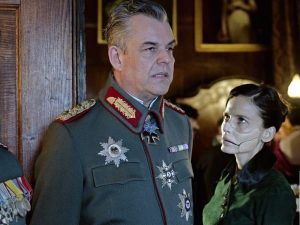 ranking enemy chemist Dr. Maru. She is out to master deadlier chemical warfare than the mustard gas of the day. Remember, in the midst of chaos and danger there is still the opportunity to do right. General Ludendorff and Dr. Maru (at right) exchange information on how their work must progress, in order to win – Dr. Maru gives a small blue capsule of poison to Ludendorff to sample. It’s heinous to watch the after effects. Danny Huston gives a solid performance as a chillingly power hungry, destruction wielding General who will stop at nothing to win WW I.

Diana takes on the ‘Godkiller’ sword, arms herself with the lasso and armor, as she feels Ares is responsible for the ensuing war. She leaves with Captain Trevor for London, which is a like a comedy of errors and you see how their two different cultures clash.  The comedic foil in all this is Trevor’s secretary – Etta Candy – and there’s a spot of attempting to get Diana to assimilate into English society (yeah, right). Captain Trevor and Diana make quick work of some German spies – before meeting with his commanding officers. Diana becomes obsessed with the idea that General Ludendorff is really Ares and wants to kill him, in order to end the war (which we know won’t).  At a brief meeting with many high powered men in important positions (military personnel, speakers of the council) there’s some talk of signing a peace treaty. Captain Trevor and Diana meet Field Marshall Haig (Game of Thrones alumni James Cosmo!) and Sir Patrick Morgan (David Thewlis). After having a small opportunity to glance at the chemist’s notebook, Diana is revealed to be able to read the cryptic code. And she puts those stuffy old war generals in their place about where real leaders should be – fighting alongside their men.

As Diana travels with Steve, you can feel sparks between them. Diana is also exposed to the horrors of war – the suffering, the chaos and the death of many innocent men, women and children. She also shows just how capable she is on the battlefield. Those reflective armbands and that lasso! Wow! Diana’s fight sequences are something straight out of The Matrix movies: you get the slow-motion style where you see Diana either sailing through the air, poised to strike down the enemy or her scurrying across the floor, ready to kick the living daylights out of German soldiers. Just the way she smashes out of the wall and you see her with the shield in hand, soaring through the air, well anyone who doubted her wartime prowess was put in the shade. During one particular sequence, the audience hears guitar riffs of the famous Wonder Woman theme song that we all grew to know and love from the 1980s. And let’s look at the costume: while there have 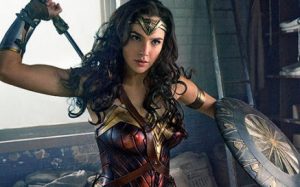 been some modifications to it, Gal Gadot wears the Wonder Woman outfit like she was born for it. My personal favorite was her shield and armbands – reflecting off all those bullets!

War is war and killing Ludendorff doesn’t terminate hostilities. Something’s amiss. So, if Ludendorff wasn’t Ares, who is? What’s that saying about keeping your friends close and your enemies closer? The one person she didn’t suspect ends up being the God of War. Ares – being so vile and corrupt – has used anyone and everyone he saw fit to carry out his machinations – and evil people like Ludendorff and Dr. Maru were just a few pieces of his puzzle to help carry out his destruction and chaos. The final battle between Ares and Diana has a few surprising reveals before peace is restored. War means leaders fight alongside their armies. War also means people sacrifice for the greater good, so that peace can be restored. In war, there really is no clear winner. Yes, one set or team of countries win and another loses but both sides always suffer horrendous losses of life, territory, traditions and peace of mind. 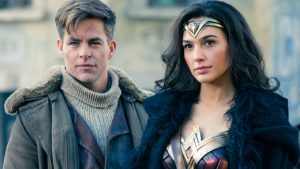 Diana resolves to fight for justice, believing that there is still good in the world. As an Amazonian warrior and more importantly, a woman, it’s important to see strength, tenacity and determination in the time right after the First World War. After all, it’s like Etta Candy stated to Diana early in the movie – “We use our principles, that’s how we’re going to win the vote” – so it is important to see strong female role models portrayed in movies, not just ‘eye candy,’ ‘bimbo’ archetypes or hapless females who are completely dependent upon the ‘knight on a white steed’ trope being played out. Having a woman to look up to – especially one who was forward thinking and selfless – brings about positive changes for women and society in general.

After watching this movie, I had two thoughts. The first was that if a potential sequel is in the works, I can’t wait to purchase tickets for it and go with my mother. The second thought: I’d like to think somewhere out there, Lynda Carter is smiling, feeling happy and proud that her role was brought to the big screen and that Gal Gadot’s casting was spot on. 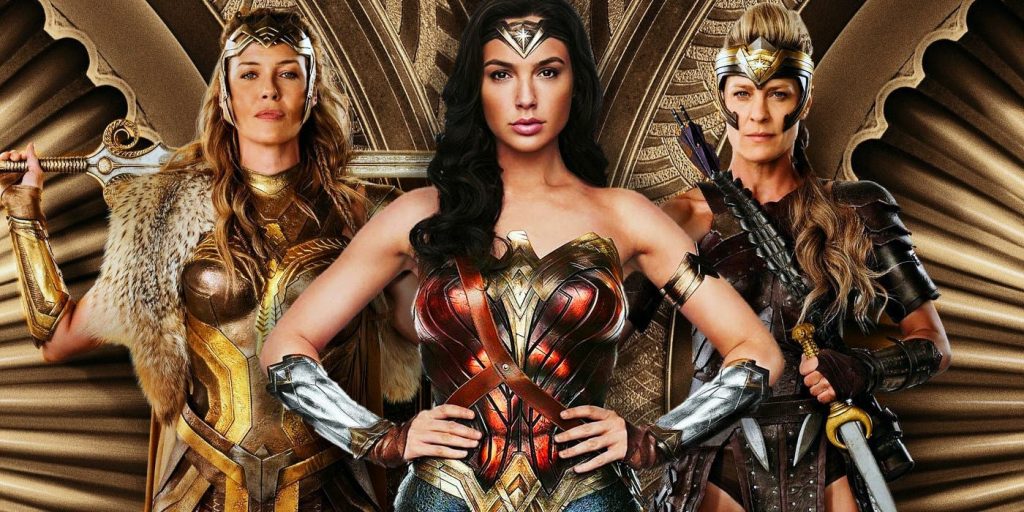