I’ve always been a fan of period piece movies. And I will watch anything with Dame Judi Dench in it – so watching Victoria and Abdul combines both factors. In this movie, we see an aging monarch really fan the flames of tradition and conventional court policies by having a mother/son relationship with someone who is a) not of British descent; b) has no ties to the British aristocracy and c) was very poor (which was a huge scandal at the time and a very bad faux pas, in court circles and etiquette). Dame Judi Dench portrays Queen Victoria with compassion at times and at others, an icy fury that you dared not challenge.

I guess when you’re a Queen of a great nation and ruling a vast empire, you develop the wisdom and experience to see who is a true subject and who’s there to pay you false compliments in order to get favors bestowed upon them. Queen Victoria is pretty jaded and sees right through all of the court personnel. You might even say that this woman, even in her twilight years, still yearned to have other types of experiences, whether it was to learn new languages or study new books, spiritual doctrines or learn about some of the countries that were part of the vast British Empire. The Queen befriends the young man, Abdul Karim (a fun, Ali Fazal), who does not come from a noble or wealthy background, and who was sent to present her with a very rare token (a gold coin) to signify the gratitude and appreciation of her subjects from India (in which England ruled as part of the empire). 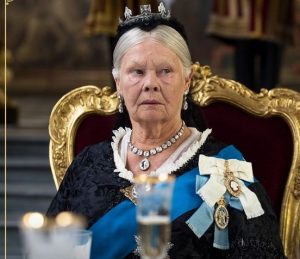 What looks like a healthy relationship between the monarch and her subject – who has the title of Munshi bestowed upon him – blossoms and deepens. Victoria invites his family (his wife and his mother-in-law) to live in England. Through no fault of his own, Abdul creates dissent amongst the stuffy court circles – and the one person who comes to despise him the most is the Queen’s son, the pompous and egotistical Bertie (Eddie Izzard). Of course, the Prime Minister (Michael Gambon) is a close second. God forbid that the Queen develops a friendship with someone else outside of court circles. The scandal! How dare the Queen want to learn a foreign language and learn about the Qur’an. It simply isn’t permitted! How dare this lowly foreigner come to the court and try to get favor from the Queen! Imagine how Abdul felt – alone in a strange country; surrounded by hostile people; under a microscope and not prepared for life at court – and under its’ glare. Add insult to injury – Bertie must have felt slighted by Abdul and his reaction was one of being threatened. He clearly saw Abdul as a rival for his mother’s attention.

Victoria didn’t have a formal education – remember this was the 1800s we’re talking about. If Victoria had been given the opportunity to study other things instead of dancing, singing, court protocol and etiquette and how to bow and curtsy, perhaps her path may have taken her elsewhere. We will never know. But what I found amazing was that this woman showed an interest in something that was not expressly ‘British’ and it’s too bad that the prejudice and resentment of her 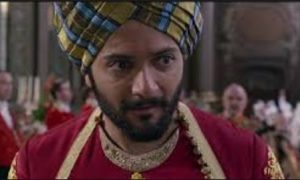 courtiers ran rampant. Instead of supporting their monarch for showing an interest in Indian architecture, style and history (it should be worth noting that when the monarch takes an interest in the countries they rule, I don’t necessarily see that as a bad thing), they went out of their way to sabotage Abdul and make him look like he was a phony, when we all know it was the other way around. Victoria’s unique interest in furnishing her castle on the Isle of Wight really drew the ire of the Prime Minister and court, because hey, anything foreign represents a threat to the empire. As with any malicious character, the PM gathers information on Abdul, in order to use it against him, humiliate him and have the Queen change her mind and send him packing. The narrow-mindedness of the PM and the court didn’t surprise me at all. Even in the present day, I’m sure there are governments and countries that would display that kind of immaturity.

Victoria finds that she is surrounded by courtiers who do not respect her wishes and will go to any lengths to get rid of Abdul and his family. Her stuffy courtiers couldn’t bear to think that a potential knighthood would have been bestowed upon Abdul – and quite frankly, her courtiers, politicians and household staff all acted out of spite – they were all a bunch of petulant children, throwing temper tantrums to either get rid of Abdul or make Victoria look like she was no longer rational. It’s not long before Victoria senses which way the wind blows – and in defending Abdul in front of her household staff – she ultimately sets plans into motion that cannot be undone. Her spoiled and petty son will never show the same respect to Abdul and his family and will bide his time until the opportunity presents itself. Once Victoria becomes ill, she knows Abdul will never receive the same respect and asks Abdul to return to India. At least there, he won’t be subject to the cruel and prejudiced behavior from the court.

As with many period piece movies, there’s usually a happy ending with a couple falling in love and getting married, or families being reunited or moving somewhere else, with the promise of a new life on the horizon. With Victoria and Abdul, there is no sunshine and rainbows, no better life in England for Abdul and no respect from the courtiers. It also displays the devotion that a subject had for his monarch, even though so many odds were stacked against him. Victoria passes away, a new monarch is ushered in and with it, all the snobbery and stuffy tradition one could imagine. What doesn’t change is the adoration that Abdul had for Victoria, right until his passing.

The movie is quite fun. It is full of wit and humor and not from just the leads but from a whole court of actors. It makes the story play better, otherwise, it could have been quite a drawn-out dramatic turn. It debuts on HBO on Saturday, July 28 and lays across the channels and streaming sites. Enjoy Victoria & Abdul.