Though he came into prominence for his considerable comedic talent, Jordan Peele has shifted his career into more serious/dramatic fare. The runaway success of his Oscar-nominated film Get Out was particularly satisfying for the acclaim it brought to the horror genre, and for Peele’s contributions as an African American man to the public discourse. Representation matters, particularly in the horror genre, one that is widely enjoyed by diverse audiences clamoring to see their experiences, fears, and aspirations captured on film and television. Peele’s appeal lies in his love for and respect for the genre, as well as the intelligence, insight, and social commentary he brings to the table.

For his new film Us, Peele turns his attention to the world at large. Us tells the story of Adelaide, a young girl (played as an adult by Lupita Nyong’o) who goes to a carnival with her parents. As she wanders away by herself, she comes across her doppelgänger. Shocked by the experience, she is rendered mute for a time. Eventually, she relearns speech and grows up, starting a family of her own with husband Gabe Wilson (Winston Duke). The Wilsons are invited to go to the coast 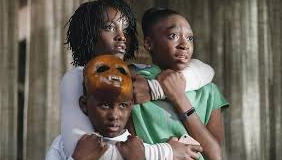 where Adelaide had her traumatic encounter as a child, and when they go, they are terrorized by exact replicas of themselves.

The film falls into a long line of horror dealing with the “other double” and one’s sense of identity. Doppelgängers have existed in the fiction of Edgar Allan Poe and in television shows such as The Twilight Zone (Peele has cited The Twilight Zone’s “Mirror Image” as an inspiration for Us, and currently hosts/produces the newest incarnation of The Twilight Zone). Unlike clones, which are made with a known purpose, doppelgängers usually appear unexpectedly, have unknown origins, and pose a threat to the identity of the protagonist, which makes them a great psychological threat in the genre.

In Us, Peele adds a layer of social observation to the doppelgänger motif, highlighted by the film’s focus on the Hands Across America campaign to end world hunger. The title of the film is also meant to have a double meaning: the plural first person, and the United States. What Peele ultimately wants to ask is, “Who are we, truly? Why do we have the things we have? Do we deserve the life we have?” These questions are not only posed by the presence of doubles in the film, but by the presence of another vacationing family: Kitty and Josh Tyler (played by Elisabeth Moss and Tim Heidecker, respectively). Though they are friends with the Wilsons, the two families subtly compete for supremacy in achieving material success, showing off their possessions to each other.

Allegory aside, does the film work? I would say it does. The horror set-pieces are constructed for maximum scares, though I would observe that one particular bit repeats an action piece from an earlier moment in the movie. The choices in imagery are deeply unsettling, and the acting, especially by Nyong’o in a dual role, is spectacular. One of the best aspects of the movie is its use of music. In Get Out, Peele selected Childish Gambino’s “Redbone” with great care, not only for its 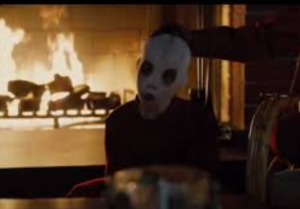 ound but for its meaning as it related to the plot. He takes that use of music much further in Us, using the Luniz song “I Got 5 on It” for a lighthearted bit of character building in the beginning, then re-working the song drastically and eerily later on in the film (with the help of composer Michael Abels).

Ultimately, I would say that Us doesn’t quite reach the heights of Get Out, but its ambition is also much greater, and the scope of its commentary more complex and global. That it doesn’t function as well as the earlier film is not a rejection of Us. Rather, I see it as a very well made film that fell just short of its predecessor. In terms of cinematic technique, it surpasses Get Out, and it’s fascinating to watch Jordan Peele grow as a filmmaker with each new project. I look forward to seeing what he has in store for us and how he will challenge us to think in years to come.

Us debuted Saturday, November 23at 8:00pm and can now be found on HBONow/Go.