It’s hard not to be a sucker for sci-fi actioners that rattle forward at the blistering pace with which Underwater possesses out of the gate. Within what feels like seconds, the intensity is ratcheted up from zero, and the film’s core threat is established. From there, it’s gleefully familiar territory as a rag tag band of engineers and scientists figure out how they can possibly get from A to B to ensure their survival. In the case of Underwater, this is no bad thing in the slightest. Sure, it’s all a bit Alien and unashamedly so, but it’s all just so goddamn fun. 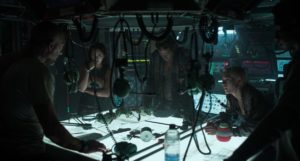 The third feature from Love and The Signal director William Eubank, Underwater deploys all of the visual flourishes trademarked in his previous outings, but given that he has now graduated to the realms of major studio budget allowances, these now carry more weight, purpose, and general contextual belonging. Everything just fits that little bit better, where ultra hi-def slow-mo set pieces in his first two films, though awesome, could sometimes feel jarring when juxtaposed against an otherwise indie tone. 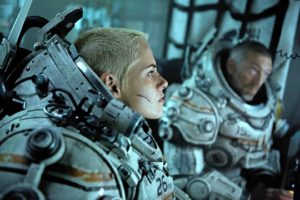 At the centre of it all is fully in-form Kristen Stewart’s Nora – a little bit Ripley, a little bit MacReady (again, no bad thing) – with whom the film opens to thunderous effect. As an earthquake on the sea floor dooms their drilling rig, it is immediately down to her and her Captain (Vincent Cassell) to discern where the closest escape pods are, and indeed how to reach them. And that’s quite literally your set up. Not all that much characterisation, it is to be said, though the writing may commendably try. There are hints of personal loss and the world above, but this is a film plainly driven by charisma over character. At a mere 95 minutes, do we really need to get into all that? Not really, and the film benefits in it’s witholding.

TJ Miller features as TJ Miller, quipping against the current to an almost inappropriate degree given the threat level. However, light banter as a coping mechanism does well to keep things breezy where they otherwise could have been sodden with dread. This is a straight up Saturday night popcorner, so the relief is welcome. And by the time the survivor numbers have dwindled and Underwater has descended into full-on creature-horror, everything is already on the homeward stretch, fully void of respite. Believe it or not, not every bombastic actioner needs to be bloated beyond two hours to achieve blockbuster box ticks.

And boy, does it tick boxes. The visual effects are nailed on, limited largely to sweeping exteriors and final third reveals, while the positively claustrophobic interior production and costume design couples seamlessly and magnificently drawing from Alien, Event Horizon, Sunshine, Sphere, The Abyss, and the rest, to make you feel right at home without any of it being too on the nose. It is a finely executed balancing act built on craft and genre intelligence that allows Underwater to exist as something of itself.

Underwater premieres on Saturday, November 21st on HBO at 930PM EST. Still not convinced? Check out the original trailer below: