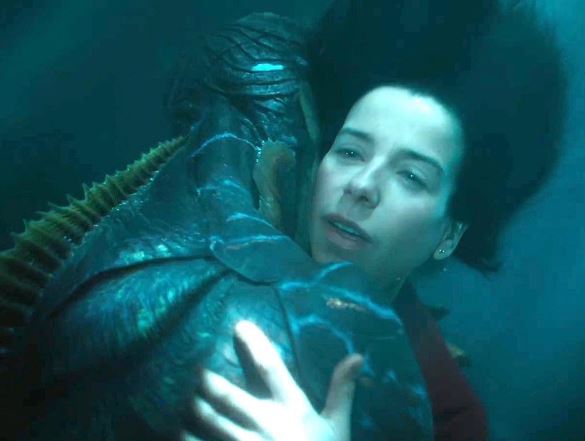 For the last several years, Guillermo del Toro has been my favorite current filmmaker. His career is not without its highs and lows, but even his less renowned films contain an undeniable craftsmanship and devotion to the medium. He is a man who truly loves cinema, horror and sci-fi, and this love can be seen in every frame of his works. Overall, I’ve preferred his Spanish language films to his English ones. Movies like Pan’s Labyrinth and The Devil’s Backbone (which I consider to be his best film) demonstrate a perfect mix of horror, fairy tale, and childlike wonder within an adult world of absolute corruption and tragedy.

Long before its 2017 release to great critical acclaim, The Shape of Water was a long-shot for any kind of recognition. The film was rumored to be a romance between a fish and a woman, and on the surface, this description sounds ludicrous. Could audiences accept such a premise? As it turns out, the film is much more than such a description would imply. It starts by framing itself as a fairy tale and introducing us to its princess: Sally Hawkins as Elisa, a housekeeper working at a government facility in 1962. Elisa spends her life adhering to an unexceptional routine: she wakes up, takes the bus to work, and returns home, where she lives alone. Despite the monotony of her life and the drudgery of her work, she takes joy in small things, like sharing a piece of pie with her next door neighbor Giles (Richard Jenkins). Elisa and Giles love to watch movies, the grand old Hollywood productions of yesteryear. Though Elisa is mute, her friends understand her and recognize her exceptional imagination. 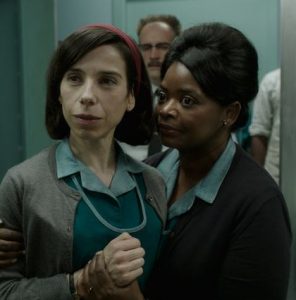 One day at work, Elisa and her friend Zelda (played by Octavia Spencer) are called into the office of Colonel Strickland (Michael Shannon). Strickland informs the two that the army has acquired possession of an important asset which is to be housed at that facility. The two women are to keep their distance and maintain the utmost confidentiality. As they go about their work, Elisa notices that the asset is bipedal sea creature (played by Del Toro regular Doug Jones) and that the colonel is torturing it in order to glean some sort of information about its powers. Elisa is immediately drawn to the creature, feeling a kinship with another being that cannot speak. She recognizes a dignity and a worth in him, becoming increasingly horrified at the treatment he receives.

When The Shape of Water was released, critics immediately recognized how special and unique the film is. It is, indeed, a love story between a woman and a sea creature, crafted by a director who loves monsters and fairy tales. Del Toro has always mentioned that he wanted The Creature From the Black Lagoon to live happily ever after with the girl, and the design of this creature is closely modeled on that earlier film. But the movie is also a story about friendship, about kindness, about treating other species with respect. It is a film brimming with empathy and this empathy 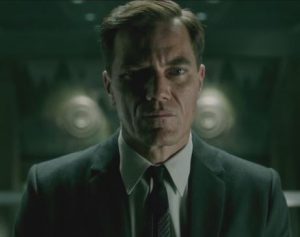 extends to its representation of disadvantaged people: the working poor, women of color, gay men. How many films feature women, particularly housekeepers, as heroes? How many fairy tales show us a princess determined to rescue her prince? How many romances cast a woman in her 40s wearing a maid’s uniform as a character that feels and inspires desire? Shannon’s Colonel repeatedly dismisses the women as nonentities due to their gender and their social class, yet they are exceptional, and it is to his detriment that Strickland doesn’t see this. Even the Soviet spy, the type of character that is merely a caricature in typical jingoistic American films, is a fully fleshed human being in this movie. Del Toro takes several opportunities, both inside the the military base and inside an all-American diner, to drive the point home: America in 1962 was a place where marginalized people endured a lot of hardship and heartbreak; and though many people look back on the era with nostalgia, it wasn’t a great time for everyone.

The performances are great across the board. Playing a character with no voice, Hawkins delivers an expressive performance, full of warmth and quiet determination. Jenkins is tragic as a closeted man who is hated by the society in which lives and losing his livelihood in advertising to new techniques in the industry. Shannon, for his part, is deeply disturbing as Colonel Strickland, a character that brings more menace to the screen than almost any villain I’ve seen on film in the past couple of years. As the “asset,” Doug Jones is compelling, heartbreaking, and superb, simultaneously bringing humanity and other-worldliness to the Creature, a character that is somehow both deeply powerful and heartbreakingly vulnerable. 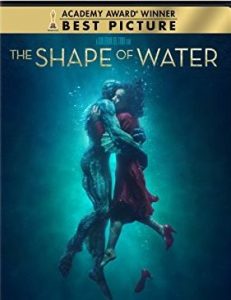 the cast for its fine work, as well as many of the artists behind the scenes. The film itself won Best Picture. Del Toro was recognized for his direction, a well-deserved award for such a talented craftsman. The film is designed and photographed with beautiful hues of green, and it is exquisite. Every object in its frames, particularly in the characters’ living spaces is perfectly designed to tell you something about them and about the era in which they live.

The Shape of Water premieres on September 22nd on HBO and all HBO platforms. If you have yet to see the Best Picture then don’t miss it on HBO!