Starring Kate Winslet, Idris Elba, and the stunning views of Canada, I can’t deny how absolutely gorgeous the movie The Moutain Between Us is. Stuck in Idaho due to poor weather canceling flights, Alex Martin (Winslet) is getting married the next day and Ben Bass (Elba) has an important surgery for a 10-year-old in the morning in Baltimore. Well, I don’t think either of them is gonna make it to their destinations. Based on a book, this film of the same name follows a harrowing tale of shivery survival.

When Alex suggests flying a charter with Ben, it would seem that they might be able to get where they need to go. But the pilot doesn’t file a flight plan and when he has a stroke, the plane goes down. Stuck in the mountainous, cold waste, these two must rely on each other to survive. At first, Ben is adamant about staying with the plane, while Alex believes they should try risking it. Eventually they do risk it, and of course, what comes are all sorts of survivalist drama.

As the movie unfolds with the two surviving against the odds, we learn Ben is married. Or rather was. He lost his wife to illness. As the two spend more time together, it’s hard to deny the attraction that begins. I mean, you’re depending on this person to help you stay alive. It’s hard not to give in to those desires, especially considering you don’t know how long you’ll live. Also, warmth factor is a bonus. The chemistry between them is lovely, especially considering how pretty they both are. But neither of them was the first choice. Or the second. Yeah, I know. Crazy right?! This was the third casting. Now, that does speak a bit to the film that actors kept dropping like flies. But for hotness, I think the film lucked out. A lot.

The beauty of the main characters and the wilderness is really the best part of this film. It’s pretty typical fare for a survival film, sorry to say. Elba and Winslet do have amazing chemistry and that certainly made it more enjoyable, but it was predictable, especially the end. Will they or won’t they survive? Will one survive but not the other? Will they find love? Most importantly, will the dog make it?! I have to admit I spent the whole movie worrying about the dog’s fate.; as I usually do with movies with dogs or cats or any animal for that matter. I was certainly relieved to see Winslet grab the dog as the plane was going down. But obviously, it’s another mouth to feed. One that could potentially be food if a person gets desperate enough. Winslet’s character takes to the dog and is always looking out for him. Elba doesn’t get along with the dog at first. The dog, most appropriately later named Dog, keeps growling at him. Now normally, I’m a person who 110% trusts a dog’s instincts. So I was also wondering if we’d end up finding out Elba was a bad guy. 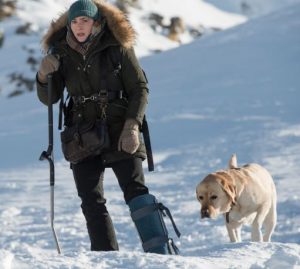 But in the end, Elba ends up adopting Dog and taking him back to London with him. In the penultimate meeting where they’ve not seen each other since they were found, Elba mentions he kept the dog. I did a bit of a double take, because after the whole build up between Winslet and Dog through the film, how could she let him go? Maybe she was the untrustworthy one all along! But really, if it were me, I would make damn sure that dog came home with me and had the most spoiled rotten life ever. That Elba ended up with the dog was a great growth for his character and their relationship, but it felt extremely out of character for Winslet to so easily abandon the poor pup.

But it was easy for me to fixate on Dog since the basis of the story is pretty basic survivalist stuff. I will say that the breathtaking views do make it a decent watch. Particularly learning the cold water stunt was completely done by Winslet on a drop rig over the water to make her drop into the frozen lake as realistic as possible. So massive props for that. It’s pretty basic film stuff, but the views do make this one a decent watch. Also Idris Elba. He’s just all sorts of fine.

What do you think? Find The Mountain Between Us debuting on HBO on Saturday, June 17 at 8:00pm and see if you don’t root for Dog.