18 years on from 2003’s double whammy finale, Lana Wachowski returns to the franchise of all franchises to conclude the path of Neo. Or, at least, restart the loop. This is done in baffling fashion which is in equal parts retreading old ground, inviting new fans aboard, all the while being the most meta movie ever made. It is as brave as it is safe, and a glorious refreshment of iconic characters which most people will say they hate, but really, they enjoyed thoroughly. 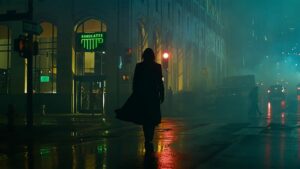 The Matrix has been rebooted, as was acknowledged at the end of Revolutions. It was to be a more free, more colorful, more united Matrix to serve as more of a home than a prison. The notion that, for some, The Matrix could be more real than the ‘real world’ is a powerful one, highlighted memorably by Cypher in the first installment, and thoroughly considered throughout the original trilogy. It is explored further, here, as Thomas Anderson has seemingly been reinserted into The Matrix as, you know, someone important – like an actor. He is the architect of one of the most cerebral and celebrated online RPGs of all time, and is lauded like a god for it. But, what is real? How do you define real? For Thomas, something is ‘off’. The first act plays out as such. His lines are blurred, and his therapist (Neil Patrick Harris in an off the wall casting – it’s fine) in no subtle and blue-pilled terms is regularly doing his best to assure his client that his ‘delusions’ are manageable.

Meanwhile, real world survivors continue to hack into this version of the Matrix, most recently on the basis that they have singled out coding previously associated with The One. Unsurprisingly, this links them to Anderson, and from there the chase is on. 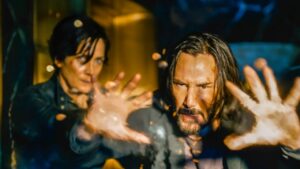 All too many will dismiss this film as a cash in – a needless retread of the same notes in order to keep the franchise alive. Where it is alarmingly fresh and fun is that it absolutely is that, but while being a scathing, overtly meta satire of exactly whatever that is. In this playfulness – literally looking down the camera lens and saying ‘Warner Brothers wanted to bank this one more time, so let’s get weird and have a fucking blast in the process’ – it succeeds wonderfully, incorporating all of your favourite franchise elements and retelling the story of The One on a new wavelength, while inviting a cynical new generation of viewers to join the cynical old fan club.

While it may take the whole first hour to wrap your head around what you might think this film is, what is immediately obvious is that this is a movie shot digitally. It adds an unavoidable sheen that is in contrast to the stylistic tone of the first three Matrixes, which has its positives and negatives, and to which its effect will vary based on personal preference. While the visual effects are expectedly impressive and in constant supply, there is an argument to be made that, when you boil it down, this sort of stuff just looks better on film. Again, it’s personal preference, so should not be taken as gospel.

When it comes to the characters, The Matrix Resurrections exceeds previous instalments in virtually every way. The unbreakable bond between Neo (Keanu Reeves) and Trinity (Carrie-Anne Moss) serves as the bedrock for the entire plot, while all supporting players are left subservient, and rightly so. Morpheus features in the form of a Yahya Abdul-Mateen II, and in a way that cleverly glosses over the absence of Lawrence Fishburne. On reflection, the film is probably better for it. Yes, you cannot have a legitimate Matrix sequel without Morpheus, but knowing what we now do about the story’s focus, the lack of Lawrence only allows Reeves and Moss to further take center stage. Both are as committed as they’ve ever been, and the chemistry between them is arguably stronger in Resurrections than any other outing. Nothing needs selling. They are everything and the only thing to each other despite the stakes beyond them, and there is poetry in how this drives the story’s entire momentum, where previously it can have felt hammy and overwrought. Elsewhere, Jessica Henwick represents a youthful sect of new characters with aplomb, holding her own alongside the iconic Reeves as she helps him find his way back out of The Matrix, and then finally back in to bring it all home. 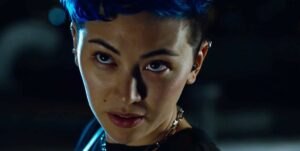 If there is to be criticism, it’s that the 45 minute, exposition filled second act whereby old friends of the real world are revisited is just as padded as it was in Reloaded, but even still, sometimes exposition is needed, and is rarely this valuable in terms of filling the gaps. And, to be fair, it does set up the Matrix-based third act rather well.

What’s surmisably great about Resurrections is that its so much joyful fun that it is hard to criticise, and yet, all it will do is be continually criticised by 45 year-old fans of the film who think that they somehow know better than the world’s inceptor. And you know what? That’s more than likely to be exactly as she will have wished it.

The Matrix Resurrections is currently available to stream on HBO Max until January 23rd, and is also in cinemas.