HBOWatch is testing out a new writer and this is his first test post. So give due attention to the words of Connor Buhagiar.

That’s right and here is my take on the Saturday night movie premiere of The House. It could be Irvine. Or Long Beach. Or, for that matter, any number of sleepy Central Valley towns where the summers are eternal, and the dreams of its college aspirants are as big as the open blue sky. Instead, it’s Fox Meadow, a nondescript community which adheres to that vague suburban binomial nomenclature of an animal and a geographic feature, squashed together. 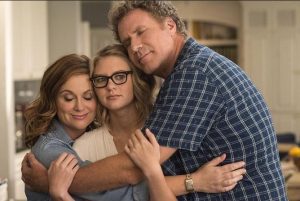 It’s here where we meet Scott (Will Ferrell) and Kate (Amy Poehler) Johansen, who just got the best news of their life: their daughter (Alex, played by Ryan Simpkins) has been accepted to her dream school, the generically named Butler University! There’s only one problem – they can’t afford a dime of the tuition, and are counting on the Fox Meadows Scholarship Fund to foot the bill, which the capricious Bob Schaffer (Nick Kroll) decides to cut, citing budgetary woes, in order to unveil an ostentatious village pool (spoiler alert – he’s a crook). But wait, there’s more: their friend Frank (Jason Mantzoukas, and oh my God, there’s a lot of The League alums in this movie) seems to be clinging to life by a bare thread, as his wife Reina has left him due to his gambling and porn addictions.

But Scott and Kate won’t go down without a fight: they both play it straight, and fruitlessly bargain for a raise. Jason finally gets the narrative ball rolling when he hints that he’ll kill himself if the Johansens welch on their upcoming Vegas trip. Straight-laced Scott betrays the united marital front and caves, and we’re off to Sin City. The trip, a raucous craps table at which the number four is sacred, ends poorly: security called, repeated chants of “You asshole!” from fleeced onlookers, and Scott being deliciously whipped by a croupier. It does, however, reveal the massive earnings potential of gambling, upon which Frank seizes like a junkie in a hare-brained scheme to fund Alex’s college education, prevent his home from being foreclosed upon, and win his wife back…all by, as he tries to convince the Johansens in a PowerPoint presentation filled with ‘giggle’-tastic Easter eggs, turning his house into a SECRET COMMUNITY CASINO. What could ever go wrong?

As it turns out, everything. In short order, the council is tipped off to the existence of the underground casino; Scott, Kate, and Frank lop off a mob consigliere’s middle finger; and Bob the corrupt councilman eventually raids their spot and absconds with their ill-gotten gains. Fortunately, this is where the movie gains some steam. Why? Gags, that’s why. Weed gags and fire gags and violence gags and adultery gags galore. There is an over-reliance, at times, on Ferrell’s and Poehler’s SNL alumni chemistry for comedy, the results of which are mixed: early in the film it’s bland and reads like the director let the two comedians phone in their B-game improv, and that’s what we get on-screen. Later in the film, however, after Scott and Kate have assumed their alter-egos of The Butcher and Weed Fiend, some of their ad-libs are laugh-out-loud funny. (Will Ferrell, in particular, hearkening back to Mugatu of Zoolander fame with his dashing women’s sunglasses was an unexpected treat.)

Like good basketball players who aren’t selfish with the ball, the headliners don’t hog all the comedy. Some of the most surprising and funny moments come from the secondary characters, in particular, the bored suburban housewives Martha and Laura who throw mad shade at each other during town hall meetings and then, quite unexpectedly, beat the tar out of each other in a Fight Night at the casino. Half the humor in the film is predicated on the basic ridiculousness of paunchy suburb people doing sexy Vegas things: when Frank adds a day club to the casino, we are treated to yet another montage, with all the drug ingestion, bikini wearing, and general debauchery one would expect at the Venetian. There is also some off-the-cuff, third-rate social commentary by the principals and the secondaries, as when Frank videotapes Chandler in his bathrobe and Chandler reacts by threatening to kill him. I chuckled at these moments…usually just once.

Visually, the color palette is warm, and the camera technique mostly enhances the comedic effect through a few abrupt zooms and pans (and some slightly sub-par CGI). It mostly works, except for a couple moments where it seems like the camera’s POV is that of a lurking spy in the Johansen house. (By this writer’s count, there were at least four lazy move-the-story-along montages in the film. For some reason, I loved each and every one of them.)

Great comedies are, at their core, great stories with great, lifelike characters who also happen to be bust-a-gut funny. Unfortunately, that’s not quite the case in The House. Alex herself, the character  or whom Scott and Kate commit at least seven felonies, is the most even-keeled, least emotional, and most boring teenager I’ve ever seen of short of Sleeping Beauty, whose greatest vice consists of occasionally smoking marijuana (!) and, after her parents have ignored her all summer, finally showing up at the casino. She has all the dynamism of drying paint. Likewise, the 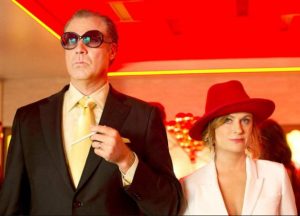 largest character development from Scott and Kate is when they embrace their roles as suburban Terry Benedicts and ratchet up the dramatic stakes, Scott gaining the moniker “The Butcher” by lopping off numerous appendages and Kate falling in love mostly with weed, but also with a butane torch that she eventually uses to light a mob boss on fire. (Dismemberment count in the film: Two.) This growth is a genuine pleasure to watch, as the Johansens metamorphose from boring sexless schlubs into thrill-seeking, power couple purveyors of vice and destruction who quite literally get off on it (although pretty Puritanically, mostly with more weed, one spontaneous sexual encounter, some lobster, and a singular public urination).

The film, directed and co-written by Andrew Jay Cohen of Neighbors fame, plays upon many of that film’s tropes: “normies” forced into an extraordinary situation who elect to profit off it in almost impossibly zany ways that would never seem even remotely logical outside of a Hollywood movie. If that sounds like a rehash of the former, that’s because it mostly is, and it’s perhaps understandable why the film only grossed $34M against its $40M budget. At a modest hour and twenty-one minutes, the film still feels slightly bloated, but the ride is entertaining enough that the viewer won’t mind. Bottom line: it’s not Some Like It Hot, but it’s a chuckle-worthy, successfully diversionary item on your Saturday-night streaming binge checklist. B-.