Paul Schrader is just about as deft a director as he is a writer, make no bones about it. With over 40 years at Scorsese’s side, he was bound to improve his crafts on all fronts as time wore on. That being said, Schrader’s most regarded successes as a filmmaker have arguably bookended his career – the powerhouse double punch screenplays for Taxi Driver and Raging Bull, and then 40 years later, his finest writer/directorship in 2017’s First Reformed, for which he received his only Oscar nomination for it’s original screenplay. In between, he made movies like The Canyons (insert grimace emoji here) which bafflingly exists on the opposite end of the quality spectrum. His latest feature, The Card Counter, thankfully, is one of the better films Schrader has directed, but it is far from perfect, where First Reformed was near. Where it succeeds with tone and tension, it is let down by a clear and overall reason for being. If it is intended as a political commentary, the point seems to be somewhat lost against the no windows, no clocks-casino to casino backdrop.

What is learned early, is that Oscar Isaac’s ‘William Tell’ has a chequered history. He is an intense and obsessive figure fresh out of prison who, admittedly, never fancied himself as a fan of confined spaces, yet has migrated from Bush-era interrogator to prison cell occupant, to a daily blend of casino floors and motel rooms, the latter of which he is compelled to customise to resemble as much of a prison cell as possible. Even the falsesness of his name suggests that all he now knows is internalisation. He gives nothing away, which is perhaps part of the reason for his success as a poker player since his release from jail, though this parallel into which he graduates is equal parts interesting and lazy as far as the character is developed. Yes, it forms the basis for the character, but again it comes down to why any of this is important or interesting. A film with this sort of direction, and this sort of plotting, cannot be wholly successful based on character study alone. It has to go somewhere. It has to mean something. Tell opens up when he meets Cirk, the son of a former colleague who is since deceased, and who is hellbent on revenge for his father’s descent and demise. This focus is targeted at an underutilised Willem Dafoe’s Gordo – a former Major turned private contractor who is able to avoid accountability for the crimes committed at US military run interrogation facilities, while all of official rank have ended up in prison for their roles in these human rights atrocities – Tell and Cirk’s father included. Tell takes Cirk under his wing, in the hope that he can divert his lone driver and provide a lifestyle that is more carefree than bound by obsession. This works for a while, but naturally, the repetition of casino-motel-road trip-repeat only works for individual personalities like Tell himself. 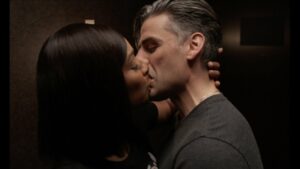 To humanise Tell further, is his eventual love interest in a perilously miscast Tiffany Haddish’s La Linda, a representative to potential bankrollers interested in profiteering from Tell’s skillset. If there is chemistry, it is purported via Isaac, as Haddish simply cannot play straight which, if you’re in a Paul Schrader film, you have to. When she tries, you can almost feel her being directed, and it is honestly distracting, especially when you have, opposite, a near career-turn from Oscar Isaac who is sensational from start to finish, performing as much with his eyes as he does through Schrader’s typically searing dialogue. Were he not so strong, The Card Counter could easily have gone down as a dud, but as it happens, it is very much worth watching for Isaac alone, and some strong directorial flourishes, even if the overall package is a cocktail of interesting ideas that don’t really have all that much to say for themselves.

The Card Counter debuted on HBO Max on June 11th, and is currently available to stream.