I was a blubbering mess whilst watching this movie. Anything to do with animals being treated poorly, harsh elements of nature to contend with and people with ill intentions always get my back up. However, if you like sweeping landscapes, believe in the good of humanity and are an animal lover, this is a great movie to watch.

Buck is our main character – a beautiful dog who is part Scotch Collie and part St. Bernard. In the beginning, we see that he has a beautiful life, living with his master – Judge Miller, in southern California. He wants for nothing and it is indeed a charmed life. Unfortunately for Buck, events beyond his control will take him away from his beloved home and subject him to the elements, dastardly humans, a new owner and something buried deep within Buck that he never experienced before: the longing to belong with a mate, a pack of his own and to truly roam free in the wild.

Buck is kidnapped and placed aboard a large freight ship, bound for Yukon Territory. Imagine going from the climate of warm Southern California to the frozen wildness of the Yukon. Talk about extremes – and poor Buck is subjected to cruelty at the hands of a real bastard of a crew member. Because you know, let us beat up on a helpless animal because it makes you look good – what a jackass that crew member was. Turns out that before Buck is sold to a man named Perrault, he retrieves a harmonica that was dropped. The owner of the harmonica is John Thornton (Harrison Ford), a grizzled man who prefers the solitude of the rugged landscape to being around people. Cannot say I blame him because, in this movie, there are a lot of ignorant and mean-spirited people.

Buck learns just how cruel humans and animals can be, especially in this harsh and unforgiving terrain. He is on the bottom of the totem pole and must earn the trust and respect of the rest of the dogs on the dog sled team and his new masters. Buck is no longer the pampered prince on an estate but a member of a dog sled team that delivers mail in the far north. When I think of the past and how many of these dogs were used to transport goods, mail, and medicines in this jagged and frozen landscape, it makes me want to cry. These poor dog teams were most likely worked to the point of exhaustion and we see this many times. It makes you angry and it makes you grit your teeth in frustration. Of course, in any group situation, there is an alpha male or female, which ultimately leads to a confrontation of sorts. Buck finds that the leader of the pack, Spitz, is a brute and a bully – and is feared. Buck and Spitz do not get along and Spitz is further antagonized when Buck rescues Perrault’s partner, Francoise. 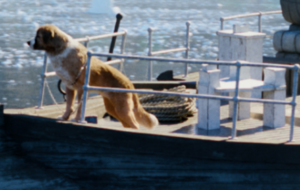 Domination in the group is stressed even further when Buck attempts to chase and catch a rabbit but releases the poor thing moments later. Unfortunately, Spitz does not kill the poor bunny but fights with Buck to assert his leadership in the group. Throughout these hard times, Buck begins to have strange visions of a black wolf – this vision helps Buck during this time. Really makes you think that animals are a hell of a lot more perceptive than we give them credit for. During the confrontation with Spitz, Buck becomes a lot more confident and with the support of the dog sled team, Buck overpowers his foe. Spitz is humiliated and flees for the wilderness. Buck is now the leader and Perrault begins to see that this dog can lead, has speed, and can get the job done.

The invention of the telegraph literally puts Perrault out of work. What is worse is that another asshat named Hal, who is a real greedy jerk with a cruel streak a mile wide, purchases the dog team. Those poor dogs are worked to the point of death and of course, I found myself screaming at the screen. Hal gets his – Thornton rescues Buck the rest of the dogs flee from Hal and Hal gets royally screwed. Hal, blinded by rage, attempts to attack Thornton outside a saloon. No matter – Buck and Thornton bond and travel further north. We find out that Thornton experienced a heartbreaking tragedy at one point in his life – his son died, and he and his wife split. Buck and Thornton enjoy their time together in the rugged beauty of northern Yukon. Buck senses that there is something else drawing his attention – a beautiful female wolf – and clearly, the dog is confused. He enjoys his peace and solitude with Thornton but cannot ignore the yearning to be free, in the wild with the female wolf.

In a bittersweet ending, Thornton senses that Buck is confused but wants to live free in the wild and he understands this better than most people. In what could have been a horrible ending for Thornton, an enraged Hal (paranoid that Thornton had been hiding gold all this time) attempts to kill him. Buck saves Thornton and seals Hal’s fate. Those final moments of poignancy really get to you – Thornton knows it is time to release Buck and let him roam free, with the wolves. It is where Buck feels most at home. Buck leaves to find his pack, finding his place in the world and living free. 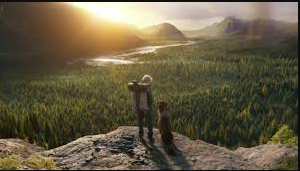 But you knew all that, this being an adaptation of Jack London’s masterwork of the same name. So a lot of the critters, including Buck, are CGI. So what? It still all captures the beauty of the novel and the bold adventure of it all. See The Call of The Wild retold again in a good way when the movie airs on HBO beginning on Saturday, November 28 at 8:00pm ET.