Set in Virginia during the Civil War, The Beguiled brings us the story of a wounded Union soldier brought into a Confederate girls’ home to recuperate. His presence immediately causes conflict as each girl is drawn to his charm and charisma. But is he an innocent victim? Or did he intend to cause conflict among the women? Let’s watch the trailer and see.

Sorry to admit it, but this is one of those trailers that spells out the entire film. Obviously, the events aren’t all in order but if you just watched the trailer, then you essentially watched the film. You could watch the 1971 version with Clint Eastwood and Geraldine Page, but I don’t think it is gonna be much different. Anyway, the basic gist is that Colin Farrell as the wounded Union soldier causes mayhem at the Southern girls’ school with his arrival. The girls begin fighting with each other, and Colin ends up in bed with a girl other than the one he promised he loved. After a vengeful rampage, the women have to figure out a way to get rid of him. Fin. 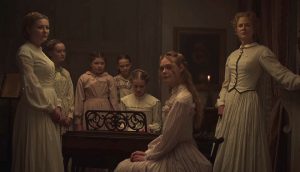 Since the plot has been established, let us talk about many other amazing things about this film. Sofia Coppola directed this and I heard she had it in her blood. This was my first Coppola viewing and I would say I agree. Immediately as the film opens we have the perfect scene setting. The lush groves of trees and soft country music laid the setting of the South. Which a lot of people forget Virginia was part of the Confederacy during the Civil War. Visually, we finally settle on a gorgeous estate. Madewood Plantation House in Louisiana in fact, which is owned by actress Jennifer Coolidge (Legally Blonde, American Pie). The absolutely breathtaking views set the perfect Southern feel, but also set the political stage for the war. This house has clearly seen better days, though some small upkeep is still noticed.

Apart from the views, the cast was also quite stunning. Colin Farrell (True Detective) is perfect as the Union solider Corporal John McBurney with his sly charm. Nicole Kidman (Big Little Lies) shines as the matron Miss Martha, charged with the leadership of the school. Kirsten Dunst (Spiderman, Little Women) is Edwina, the teacher of the school who becomes taken with John and he eventually asks her to run away together. Elle Fanning (Super 8, Maleficent) plays Alicia, a young woman clearly experiencing her sexual awakening as she becomes enthralled with John. Oona Lawrence (Southpaw, Bad Moms) is utterly adorable as Amy, the young girl who finds John and also finds in him a friend. Together with Angourie Rice, Addison Riecke, and Emma Howard, we see girls of all ages fall towards the charm of Colin Farrell. And each of them is fantastic in their acting. 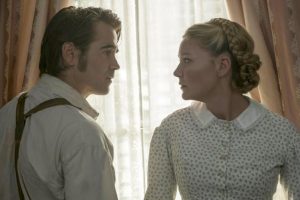 One thing I appreciated about the setting is that this girls’ school has become a catch-all for women. Who are the ones who are often forgotten casualties in war? Women and children who at that time would likely be struggling to make ends meet. As made reference to in the film at least once, Union soldiers had raided their garden food supply before. So these women are generous for bringing him in, and letting him stay as long as they did. Though based on how many opportunities they had to get rid of him, I think his charm and smarminess had more to do with that. I see that thirst, Nicole, while you were wiping him down. That’s some acting there. Anyway, while wars are known most for the body count on the battlefield, there are plenty of losses from those behind the lines.

Overall, the film features a stunning cast, acting their butts off against a gorgeous Southern backdrop. Directed by Coppola, we see a story about women and their desires. But also what can happen when those desires become corrupted. Worth the watch. And you can do so when The Beguiled debuts Saturday, March 17 at 8:00pm.