Comic book movie internet is, nine times out of ten, a pretty awful place to spend time. From the earliest announcements surrounding Matt Reeves’ The Batman, there was whinging as if The Dark Knight Rises should have closed the book on the caped crusader once and for all. Or, if you like, on the other end of the idiot spectrum, there were resounding voices in favour of Zack Snyder being given more lead to grow his iteration. That’s not to say that Snyder didn’t deliver with what he had. You only have to go as far as the HBO Watch review of his Justice League to know just how highly it was regarded on this end.

If it wasn’t petty keyboard fanboys questioning the need or want for this film at all, it was cinema illiterates who still, after all this time, believe that Twilight is all that Robert Pattinson has ever brought to the table, and should forever be judged as such when, realistically, he is one of the single most exciting talents working in Hollywood today – Josh and Benny Safdie’s Good Time being the go to example of this cold hard fact. 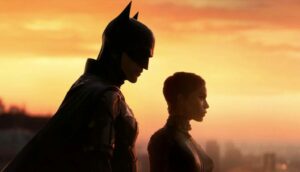 There were even those that needlessly doubted Matt Reeves’ credentials as a writer/director, even when his Apes sequels have been out in the world for years, existing as two of the finer studio action films of the last decade.

All of this – top to bottom – was a recipe for almost guaranteed success. Even the venomous Twitterverse spew pointed in the direction of The Batman gearing up to go hard at challenging the comic book safe spaces. Marvel has seemed tired since Endgame, while the DCEU stutters along still. Cinema deserves better, and Reeves delivers an absolutely unforeseen knockout that surpasses the highest of hype.

What unfolds is a dark, violent, brooding epic that is barely a comic book movie at all. Rather, Reeves leans into more David Fincher-esque territory, keeping Zodiac and Se7en firmly in it’s rear view. There are twists, turns, mysteries and reveals that rival the best psychological thrillers, using The Batman as a POV narrator. The audience learns more as he learns more, as it should be. Nothing is told.

Striking most with regards to unavoidable comparison to Nolan’s trilogy is that where the former were all arguably Bruce Wayne movies (Batman features on screen for 15.7% of The Dark Knight Rises), this is easily the most Batman movie to date – to the point where Bruce is merely Batman’s cowl. Reeves’ film takes place almost exclusively at night, in the rain, just as it should be. These murky, muddy shadows, as poetically covered in Pattinson’s Nirvana-fuelled opening monologue, are where the concept of Batman, as well as the entity itself, exists for almost the entirety of it’s three-hour runtime. A runtime, it should be added, that refuses to drag, though that may be contested by people who apparently don’t like art.

While Pattinson may not be the definitive Bruce (and Reeves’ script isn’t asking him to be), he is the ultimate Batman in every sense of the word. He is an atmospheric, aggressive, angry and unrelenting antihero that is truest to the ethos of the iconic character. But what’s best, is that for a 176 minute film, it doesn’t waste any of that time retreading tired territory to inform just why that is. The audience must know by now, so why pander to it? Instead, the focus is on building a new Gotham from the ground up, using the newest LED set building techology available to seamlessly merge London, Liverpool and Chicago to deliver the city as a living, breathing character – a longed for trait not really seen in a Batman film since Schumacher’s mid-90s jaunts. In short, The Batman is somewhere you can live within both bleakly and gleefully as it impresses at every single turn. Additionally setting the stage is a horrifying opening sequence that introduces and establishes Paul Dano’s Riddler as a murderous neo-terrorist fuelled by conspiracy theory. As his plotting proceeds to drive the film and Batman’s every next move on a course for Dano’s unmasking, the consideration with which this character has been conceived by both writer and performer becomes increasingly evident. As an all too close to home nod to a petulant generation of would-be QAnonites, Dano out-Dano’s himself in a role he was born to play. He is simply excellent as this villain who does well to even, at points, have audiences almost sympathetic to his cause.

On Bats’ side is, of course, Alfred Pennyworth – this time in the form of a younger, more brauny but equally weathered, if underutilised, Andy Serkis, and Selina Kyle – the ying to his yang as you’ve come to expect, but in a no less than fresh manner by way of Zoe Kravitz. She is moderately warm where Pattinson is ice cold and humourless which offers something of balance, even if the film’s end result is as positively stark as you could ever hope for.

Rounding out, and not really taking sides when all is said and done, is an entirely unrecognisable Colin Farrell as Oz (Penguin). The question has been asked as to why, instead of bothering with what will likely be Oscar-winning hair and makeup, an older, fatter, uglier actor was not cast. But, where is the fun in that? Farrell has a blast with it, and therefore, so should audiences. A fine example of filmmaking simply being fun, rather than procedural. 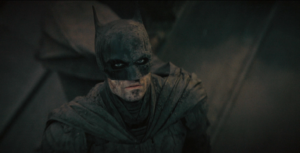 Rooting and progressing affairs is a punishing score from Michael Giacchino which, if listened to closely, is a haunting blend of Something In The Way (which in fact features in both the film and it’s marketing) the Imperial March.

While it may not be the best Batman film, it is almost certainly the best Batman-film, and in time may even be regarded more favourably than even The Dark Knight. Who can say? What will inform this in the most exciting way will be the strength of the sequels. Reeves and Pattinson have both signed on for three pictures, and if this towering cinematic achievement is just building the basis for what’s to come then, well, damn.

The Batman is available to stream now on HBO Max.