It would be easy at this point to tar Martin McDonagh with the age-old brush of ‘whatever he makes gets a ridiculous amount of awards attention’ (see Scorsese, Spielberg, and more recently Chazelle, etc). What all these have in common though, and it’s crazy at this point to be talking about McDonagh in the same breath as Marty and Steven, is that it’s largely if not entirely warranted. McDonagh, like the world’s best songwriters, seemingly is in a position now whereby he only turns out perfect screenplays. And, as his directing chops improve with every feature, is creeping towards only releasing perfect films, apparently. 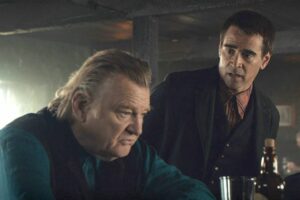 The Banshees of Inisherin is comfortably his best film to date, with writing so inventive yet subtle, it boggles the mind to think that one day a few years ago, he literally just sat down with this idea and was able to craft such a gleeful and sad statement of internal grief and varied masculinity. While McDonagh’s films have always been classified as black comedies to a point – some more obviously than others – the strength in Banshees… simple story complimented by the power of the involved performances means that he has enabled a film to toe the line like few before it. It is a master craft of finding humour within depression. As a viewer, you are able to wittily revel in the sadness. 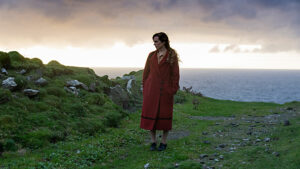 Padraic and Colm were once the firmest of friends, and their entire island community knew them as such. Then, one day, without any offer of explanation, Colm up and decides that he has had enough of their relationship, and cuts Padraic off. That’s not only your setup, that’s your story. The rest is character development – what they seek to learn of each other, and learn of themselves. To understand the workings and grapplings of a soul that is not your own is a nigh on impossible task, as well-intentioned and genuine as you may be, as is Padraic’s struggle brought to life through a career turn from Colin Farrell. He explores almost every emotion possible as he tries to comprehend why such an extreme dismissal should occur without warning. It is so dynamically sharp, with the flexibility to shift between his interactions with Colm himself, his equally bemused sister Siobhan (a gorgeously textured Kerry Condon), and the charming village simpleton in Barry Keoghan’s Dominic – another best-to-date performance from the continually impressive youngster. Gleeson’s performance, contrarily, is that of a simmering pot-stirrer in Colm. Even though he dares the most shocking actions, he is never showy, and the volume is never raised. He is reserved if intent on his influence and leaves the emotional display to the reaction of the other actors.

And if all this wasn’t enough, the film is entirely elevated by its picturesque setting on the Irish islands of Inishmore and Achill – both of which reduced the need for exploratory production design to near enough zero and thus rendering Ben Davis’ gorgeous photography a character unto itself. The icing on the cake is another temperate McDonagh score from Carter Burwell, who surely will find himself on the Oscar ballot in February alongside McDonagh, Farrell, Condon, Gleeson, and – if there is any justice – Keoghan whose performance almost, just almost steals the movie from the powerhouse leads.

The Banshees of Inisherin is now playing across HBO’s platforms.