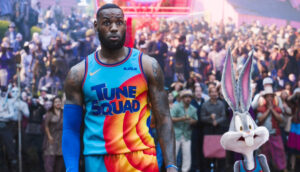 If you’re sitting down to write an objective opinion piece on a movie like Space Jam: A New Legacy (or any film you’re tasked with, for that matter), the first question that should be considered is ‘who is this for?’. It’s for kids, right? A new generation of would-be Looney Tunes fans who perhaps have, up to this point, spent more time entertained by quick-fire Youtubers than ol’ Bugs Bunny? Perhaps, Doc, but will they have seen Ken Russell’s The Devils enough times to comprehend the glaring visual reference mid-way through?

On a different approach, maybe it’s for fans of the original Space Jam – now thirty-somethings who have been lucky enough to grow up through the heydays of both MJ and Lebron, and who thusly have been crying out for this sequel (?) since it was first announced to be in development. They’ll at least appreciate the Fury Road sequence, right?

Or, is the intent that there is to be something for everyone? Now, we’re cooking. 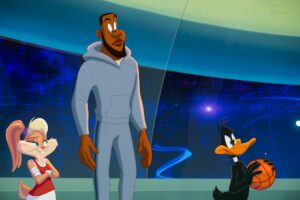 Space Jam: A New Legacy is unfeasibly long, clocking in at a mind-melding 115 minutes. But, why (you will have wanted that Ryan Reynolds gif from Harold and Kumar to have featured here, but alas, print media)? The only conceivable answer is that from the list of hundreds of Warner Bros IPs handed to the SIX screenwriters responsible for this neon fever dream, the only prerequisite they were given to stick to was that they must include all of them. Story? Sure, why not?

LeBron James is LeBron James, but is he? In Space Jam, Michael Jordan’s actual family are played by actors. Fine, that makes sense, and at least roots Jordan in the real world. In A New Legacy, LeBron’s family is unexplainably entirely fictional, which is baffling when you consider that his alleged son, Dom, forges the basis for the entire “plot”. This doesn’t derail the non-existent narrative necessarily, because it was fucked since Jump Street. But, for a film that, regardless of its innocent intent, is bound to invite playful criticism, why the creative choice to have James feature as this odd, pseudo-real version of himself? Granted, it could well have been that he, himself, preferred a fictitious family and the studio just said, “sure, none of this makes any sense anyway, so what’s one more thing?”.

Swiftly onwards, LeBron wants Dom to go to basketball camp this summer, but Dom has created a video game – on his own – and wants to shop it at a computer convention. A quandary, both logistical and emotional. Meanwhile, Don Cheadle is a self-aware AI at (you guessed it) Warner Bros who just feels like he deserves more recognition than he is getting for his most recent contributions to…something. So, he virtually abducts Dom to within the Warner Bros servers (obviously!), and informs LeBron that he must field a team in a basketball game that must be won in order to negotiate Dom’s release. It really is quite ludicrous and entirely without motive that any viewer, let alone a child, will be able to comprehend. For a movie this garishly stupid, throwing ‘hard to follow’ into the mix just seems sarcastic. Nevertheless, there is now a “reason” for Lebron to team up with Looney Tunes characters and play a basketball game…an hour into this thing.

The second half of A New Legacy sees the game itself play out. And, though bright and expensive, is inexplicable in length. The gall that this film has in it’s expectation that pre-teens’ attention is going to be held for this amount of time through clunky set up and mediocre pay off is actually commendable. 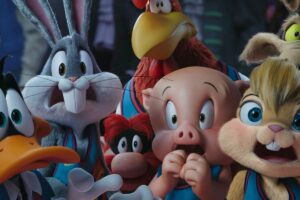 The purpose of the running time is so clearly and obviously to cram in as many Warner Bros properties as possible, but are these kids going to have seen The Matrix? Oh, it’s for the parents? So, by that argument, it’s okay that the kids are going to be completely alienated for regular five minute visual intervals they don’t relate to while the moms and dads are entertained for a bit? One thing is for sure, the target audience (if there is one) certainly shouldn’t have been anywhere near Game of Thrones for their age, but of course, the overreferencing is on show for all to see. Within all of this mumbo jumbo, you just can’t help but feel sorry for LeBron James. He gives it everything, but was given nothing. But then, would you ever have expected more from the director of such fondly recalled fare as Undercover Brother, Scary Movie 5 and Barbershop: The Next Cut?

All in all, Space Jam: A New Legacy, it could be argued, is trying too hard to appeal to literally everyone and that’s why it will be a critical failure. There have been plenty of enjoyable messes along those lines. The reality is, though, that it’s not even that. Simply put, Warner Bros has attempted so shamelessly and desperately to make it about themselves that what could have simply been a bad film that is at least a charming good time plays out like a celebrity-endorsed two-hour trailer for a Warner Bros theme park that, disappointingly, doesn’t even exist.

Don’t forget – The Matrix 4 is out at the end of this year!

Space Jam: A New Legacy is streaming now on HBO Max until August 17.