1996 was a particularly memorable year of my life. 1996 marked my freshman year in high school, and one of the events that happened over the previous summer break was discussed in several of my classes. That event was the bombing at Centennial Olympic Park during the Summer Olympics in Atlanta GA. I can still vividly remember the media-circus that ensued, and this was brilliantly captured in Clint Eastwood’s Richard Jewell.

The titular character Richard Jewell (played by Paul Walter Hauser) is introduced to the viewer in the most impartial manner. Jewell, a man of sincerity and politeness, has one undeniable flaw. Pride. Watson Bryant, Jewell’s one time employer and eventual lawyer, warns Jewell to never let power taint his ego when he becomes a police officer. Despite being an ideal employee for Bryant, Jewell oversteps his boundaries as a Sherriff’s Deputy and college campus security guard. He is subsequently fired from both positions. These marks on his professional record(s) were circumstantial yet would be near damning arguments against his character after the events of July 27, 1996. 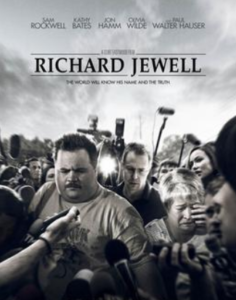 Films presenting historical events are at a disadvantage. These films are criticized for not being accurate and have the daunting task of making a well-documented event intense and engaging. Eastwood manages to make the entire Centennial Park bombing sequence nerve-racking.  The discovery of the pipe-bombs, the unsuspecting crowd oblivious to the danger, the evacuation sequence, and detonation are all masterfully executed. This could have been the highlight of a lesser film, but the fallout of the event is far more gripping. Jewell becomes the prime suspect, and his lauded efforts are quickly dropped for the more sensationalized (and false) news story that Jewell is an attention-seeking fanatic that would do anything to appear as a hero.

We all know that Jewell was eventually fully cleared of this travesty, but Richard Jewell is all about the progression of a story being driven and molded by the media. CNN, was in its early years and was capitalizing on its 24hr reporting capabilities. Instead of remaining unbiased in its journalism, CNN and other major news outlets ostracized a man whom did not have one iota of physical evidence against him. This is obviously Eastwood’s intent to criticize biased and half-assed reporting; a problem that has plagued American journalism for decades. 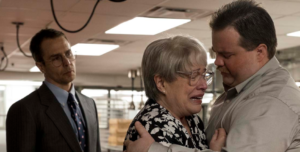 Paul Hauser, Sam Rockwell, and Kathy Bates deliver superb performances as Richard Jewell, Watson Bryant and Richard’s mother barbara Jewell respectively. The supporting cast is convincing, however those in opposition to Jewell are presented as narrow-minded and one-dimensional. This is deliberate due to the writer (Billy Ray) and Clint Eastwood’s intent to show the tunnel vision actions of law enforcement and the media. However, my one complaint is the interpretation of Olivia Wilde’s character, Kathy Scruggs. Although Scruggs was an actual Atlanta-Journal Constitution journalist, her movie interpretation is more of a plot device than an actual character. We never see her do any writing, research, or other duties of a journalist. She simply looks wide-eyed at more palpable characters and continuously repeats “Jewell is guilty” in different phrases. Wilde, a totally capable actress, should have had a better-written part.

Richard Jewell did not reach a large audience at the box office. This Saturday, August 07 at 8pm, please give it your attention at Home Box Office.