Credit to Warner Bros for putting faith in an original IP this summer after the shameless atrocity of Space Jam: A New Legacy. That Reminiscence even exists as a big budget theatrical release is an achievement in and of itself when you consider how heavily major studios are currently leaning into existing properties to try and make back the box office money lost to the pandemic across the board. Toss a Greatest Showman reunion of Hugh Jackman and Rebecca Ferguson into the mix, and there is serious reason to get excited.

Written and directed by Lisa Joy (HBO’s Westworld) in her feature film debut, professional and life partner Jonathan Nolan is left behind in this brave, solo venture into neo-noir territory that features tech-sci-fi more akin to the other Nolan. There have been lazily drawn comparisons to Inception doing the rounds, but the similarities are few and far between, largely due to the fact that Inception was comprehensible and actually engaged with audiences emotionally.

The issues with Reminiscence certainly have nothing to do with technical prowess. On a $60m budget, there are wonders at work here both visually and aurally. What immediately lets it down is that the near-future technology that forms the basis for the entire narrative is fundamentally flawed, and the sooner in the film the viewer clocks onto this, the worse the film becomes as it goes on. Let us be thankful, then, that this isn’t one of those summer blockbusters that is 150 minutes for the sake of it. At a breezy 116 minutes, Reminiscence will fulfill a Friday night void inoffensively for most. This sort of sci-fi will always require suspension of belief. However, that can be either fun even if holey, or frustrating because it makes no sense and is forever contracting its own ground rules. 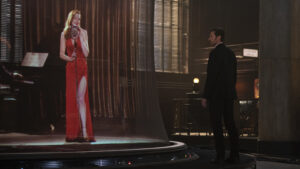 Inception was about shared consciousness within a singular dreamspace. Fair, fresh and fun – where Reminiscence deals in gaining a third-person perspective of the subject’s memories. The difference here is largely that memory is a tangible science that plenty is known about. Here lie two key problems that even a cinematic suspension of belief will do well to overcome. Firstly, when Nick’s (Hugh Jackman) ex-military memory visualiser machine is attached to the subject and turned on, why is what we see from a third-person perspective rather than the subject’s? This is garishly and immediately questionable, and apparently knowingly so by Joy who attempts to explain it expositionally five minutes after it is first revealed. Unsurprisingly, this comes across more as an effort to sweep it under the rug and move on. However she may try, it is impossible. Memory is everything to do with perspective, and therefore this angle demands answers which are undeliverable.

Secondly, and considerably more problematic is the notion that these memories are in actual fact. Everything that Nick is driven to act on throughout the film in his unrequited pursuit of a woman in trouble that he literally barely knows is based on the apparent general acceptance, both by him, the military, law enforcement, and most critically, the audience, that the memories that are regularly visualised are indeed exactly how events unfolded in the past. When introducing the nature of this technology, they even go as far as using it as a device to introduce Rebecca Ferguson’s Mae. Where up to this point, we understand Nick Bannister’s post-military business to involve allowing folks paid access to loves lost and even dead pets, rather than for solace, Mae just wants to find her keys. This example, perhaps more than any that a scriptwriter could have thought up, is incomprehensibly flawed because memories as an exact science are based 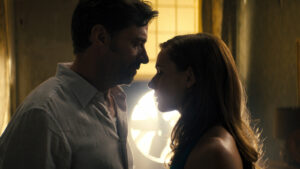 on perception. Simply put, if two people go to a restaurant and have dinner, though they are sharing in the same event as defined by the passing of time in a given setting, their memories of the event are never going to be a mirror image of one another. Even if there are factual similarities (a bird flew in an open window at 7:04pm), how their memory of it is recalled will always be based on the unique experience of the individual that is defined by how they perceived it to be. What makes Mae’s lost keys example of Nick’s technology in play even more troublesome is that if she is sat at a dressing table and her keys fall out of her bag and onto the floor, if she did not see and acknowledge this to have happened at the time, then she will have no memory of it to recall. End of story. To see this play out on screen so early on in the knowledge that the filmmaker is very plainly asking you to suspend belief and simply ‘enjoy the ride’ is, quite frankly, insulting.

That this core plot device on which all of Reminiscence is based – every character, every action, every reaction – is so fundamentally broken is to be completely devoid of any emotional investment beyond it. It is a cold, isolating narrative that seemingly stems from the impacts of climate change to suggest broader worldbuilding that it delivers, while the stakes attached to the characters are so insular that ultimately it is impossible to care.

Reminiscence is available to stream on HBO Max until September 20.