The devil will have his way….whether you are ‘Ready or Not’ 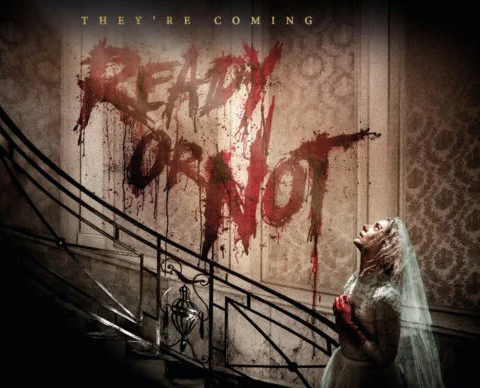 If any of you have watched Impractical Jokers (now on HBOmax) and are big-time fans, there is a punishment for Sal in the third season where he has to make a best man speech at a wedding, with the speech being written by the other guys, naturally. One point in the speech mentions that ‘the devil is the mother-in-law’, in front of every relative from both the bride and groom’s sides. As Ready or Not ended, I remembered that episode and said to myself – Well, that speech ain’t wrong! Because when you make a deal with the devil himself/herself, you either become one, or you are dead. No happy endings there. And Grace is about to have some first-hand experience with the Antichrist himself.

Ready or Not begins with two kids (brothers) running around, with the elder one hiding the younger, for reasons we still do not know. Then we see a man in a suit, the elder kid yells – He’s in here!!! Two bows are struck at him, and the severely wounded man is taken away by his hunters in masks, while a woman looks on sobbing nervously (his wife). The door shuts on them, leaving us to our imagination as to what would have happened to him. And then we move quite ahead into the years, to the smartphone era. Grace, an orphan, marrying off into the family which we saw earlier (the masked one, yeah), and we as the audience know they won’t live happily ever after. Alex, the groom and the younger brother seen earlier in the movie, look…kind of happy. Because he knows the night may not end well. As we meet the whole family (Daniel the elder brother and his wife Charity, Alex’s parents Tony and Becky, his aunt Helene, and his crack-addicted sister Emilie and her husband Fitch), we see there are just a few shades of crazy, and the unsettling (Aunt Helene). Alex knows what tonight might hold for them, and tries to talk her into eloping together. Naturally, she declines. We only get a vague idea at the start plotwise, when Tony asks Alex if he is ready for the implications should Grace pull THAT card, and whether he would be prepared to do what’s necessary?

he game. Well, it involves pulling out a card that would decide the game that the newly wedded bride/groom has to play to get initiated into the family. Of course, Grace gets the most dangerous game of all – Hide and Seek. As she speaks it out, Alex sinks into his seat, while the others have a mixture of surprise and concern on their face. And then begins the hunt – Grace versus the Le Domas family. She goes into hiding, unbeknownst that the family is locking and loading its weapons. As slasher movies go, this one takes quite some time to get bloody, when Emilie unwittingly takes out one of the maids…and then another. By this time, the rules are completely clear for Grace, as Alex comes clean to her about the family ‘tradition’, and she jumps into survival mode, with Alex offering his help, and Daniel…kind of also looking out for her (he’s not big on the family tradition).

What follows are Grace’s attempts to survive, which earlier resulted in a grisly death of another of the family maids (three down now, 1 more to come), her hiding in a kitchen, a barn (this epic scene involves some animals, an irritating kid, a secret door, and some sacrificial bodies, and holes in Grace’s hands). The family butler also gets involved in the 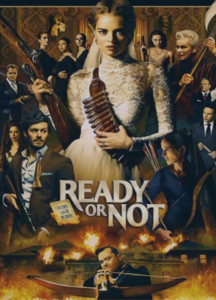 game, as Grace successfully escapes their home (we know it’s still not over…she’s not bloodied enough). She successfully manages to drive off…until the car shuts down, on grounds of being stolen (it was the family’s, you see). The butler catches her again, and while driving her to the mansion, gets killed as the car crashes, with the movie teaching us some valuable driving lessons at this point. Daniel, however, finally catches her, establishing himself as a villain, and then she is brought home and put on the sacrificial table, being offered to the devil. An unexpected twist follows, which I would not ruin for you, and this is followed by 2 deaths (in retrospect, it’s good that these deaths happened at the hands of humans, compared to what follows). Then comes another shocking twist, and Grace is put back on the table again.

By this point, sunlight has almost broken through, and time is running out for the sacrifice, as it needs to be completed before sunrise. Till now, we have not seen a bloodbath in the movie, but things are about to go up a notch. As they again fail to kill her, the family cowers in fear of what the devil (known as La Bail) might do to them. For once, it seems like it will all be fine, no one will die, and Grace would somehow escape and call the cops or whatever. And then, Aunt Helene explodes, then one by one, Fitch, Emilie, the kids, Tony…all just…burst in a pool of blood (never have I seen something so satisfyingly gory). And what about Alex? Again, you need to watch the movie. It’s fitting then that at the end, Grace sits on the lawn stairs with Becky’s cigarettes, lights them up, and as a policeman approaches her to enquire her safety, he asks her what happened. She simply mutters – in-laws. And we now have a new ‘final girl’ to ‘Grace’ Hollywood.

Crazy,isn’t it? See it for yourself across HBO’s platform as it debuted Saturday, May 23 at 8:00pm