Pokémon is so upfront about the fact that it’s a means to sell toys and video games to children (it’s the catchphrase, “Gotta Catch ‘em All”) it doesn’t seem worth it to come at this live-action movie adaptation like it’s a valid critique. It’s so ubiquitous you could say its even part of the branding. With brands like Star Wars and Marvel that try to hide the 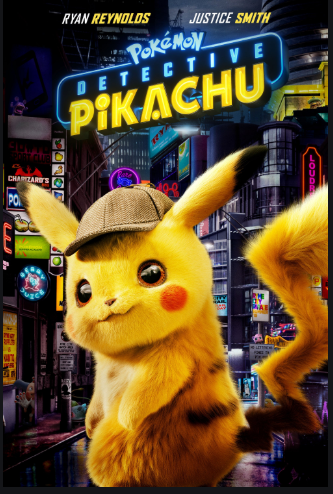 cynicism between the lines of stories that try to grapple with modern themes in the vaguest way possible to avoid alienating any audiences, Pokémon is almost refreshingly upfront about what it’s intended goal is.

For those not in the know, Pokémon are creatures that roam the world in the wild. They’re as varied as animals in the real world, but with the notable difference of being a lot more cartoonish and in some cases much more dangerous. There are Pokémon cows and birds, but also ghosts, dinosaurs, even some that can use telekinesis and read your mind. Humans of this world see Pokémon as creatures to be lived alongside and respected or to be taken advantage of for their power. Knowing all that brings us to Pokemon Detective Pikachu; the movie now appearing on HBO.

Ever since losing his mother, Tim has had a hard time connecting to anyone, so much so that at 21 he’s let go of his dream of being a Pokémon trainer and settled into a humdrum life of being an insurance salesman. But when he receives a call from the Ryme City police that his father has died, he’s pulled into the world he thought he left behind by a wayward Pikachu (voiced by Ryan Reynolds) who claims there’s a larger conspiracy afoot.

All the Pokémon in this movie are impressively animated and suitably adorable, intimidating, or straight up confusing (sometimes a combination of all 3). And for those familiar, it’s a fun game to see how many you can identify in background shots (can you catch them all?). For those not in the know, it’s likely to be a bit bizarre. Why are some of the Pokémon somewhat more human looking? Are they pets or are they servants? These are questions you shouldn’t be asking yourself because that’s not exactly the point and these aren’t questions the kids watching, playing, or collecting are asking themselves about Pokémon either. Pokémon can be whatever it wants to be to its creators 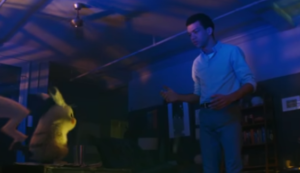 but to kids the loyalty and empathy on display when trainers and Pokémon help and protect one another is what they remember.

The mystery itself is only a little convoluted, and any half-paying attention parent will likely be able to figure out where it’s going even without any knowledge of the source material. For those who have grown up with the video games, the trading cards, and/or the cartoons, it can be genuinely touching at times. What if someone made a movie about talking to your pet and your pet was able to talk back… but also shoots lightning? It’s a potent combination of nostalgia and delight to see something so silly be taken seriously without feeling like it’s required to be grim and dark. This movie has some genuinely funny moments that don’t detract from the overall sense that this is something a ten-year-old you would have adored.

This movie didn’t need to be as good as it is. Suitable for kids but just as watchable for adults. The name alone was a guaranteed draw and the idea of seeing Pokémon in live-action has been in the back of the minds of those who got to see the animated movies in theaters way back when. But what we have here is a mesh of genres and styles that’s completely out there, yet comfortably familiar.

And who isn’t a sucker for the rain-soaked neon lights of a city with a dark secret buried inside? Do yourself a favor and check out the trailer below and gather those Pokémon fans if you got’em and seek out Pokémon Detective Pikachu debuting on SATURDAY, DECEMBER 28 @ 8:00pm and across HBO’s streaming sites.