One year ago, Paul Thomas Anderson and Daniel Day-Lewis (who brought together the extravagant There Will Be Blood in 2007) reunited after a decade for a destined awards season darling, Phantom Thread. Anyone familiar with Paul Thomas Anderson knows he is not one to confine to conventional norms in terms of storytelling, plot progression, or general technical aspects of filmmaking style — not to mention the consistently dark undertones of his films, which always tread the line between psychologically existential and surreal. It is for this reason that every Anderson film works in its own unique way, from the murderous prospector in There Will Be Blood, to the tortured fame that comes from being a porn star in Boogie Nights, to the humanistic philosophy and cult mentality in The Master, to the hypnotically surreal Inherent Vice, and don’t even get me started on Magnolia… there is a style to Paul Thomas Anderson that is unmatched in cinematography, tone, and execution. Character arcs are intricately interwoven and plot progression tends to have less of a driving factor as far as resolution goes, given Anderson utilizes a very stream-of-consciousness style of filmmaking that is uniquely effective for the level of tense disorientation he is known for. It is because of this, essentially, that Phantom Thread is a league all its own for Paul Thomas Anderson. Phantom Thread, on the surface, appeared to be a highly stylistic change for Paul Thomas Anderson. The master of modern surreal and visceral existentialism telling the tale of a fictitious male fashion designer in 50s couture London, coupled with the beautifully flowery musical composition of Jonny Greenwood, marked a definite change for Anderson — though admittedly, he always seems to capture the tormented existential male quite well, and Phantom Thread is no exception. On that note and avoiding spoilers of any kind, it should be implied this is very much an Anderson film, which is to say, it goes to dark places you wouldn’t expect it to go in manners you wouldn’t expect it to do so. Phantom Thread is much more grounded than his more outlandish work yet retains a similar level of sharp and quick wit, making it an immensely quotable highbrow comedy that is rapid and vicious and playfully hilarious. Daniel Day-Lewis, as always, went full method actor for the role, studying fashion and interior design from the 50s for the role along with rigorous costuming sessions. Day-Lewis is a force to be reckoned with in the final film of his career, delivering a scathing and fiercely unforgettable performance from start to finish. (Please let this not be true, especially after delivering such a masterful performance.)

I’ve cautiously avoided discussing much of the plot of Phantom Thread up to this point, and for good reason. It is a film I believe most should go into blindly because it is an experience that builds with poignant effortlessness and beauty, eventually arriving at a level of macabre that is more romantic than in any way repulsive. However, for those interested in a minimal plot rundown: Phantom Thread revolves around Reynolds Woodcock, a man who makes dresses and is the epitome of high culture in 50s London, where women fight over his designs and go as far as telling him they’d like to be buried in one of his dresses.

However, the women in his life never seem to stay. He is cold, detached, and arrogant, so this isn’t entirely surprising, and he is known best only by his sister Cyril with whom he lives. Phantom Thread revolves around Woodcock’s relationship with Alma (Vicky Krieps), a woman who happens to narrate the film. She initially meets Woodcock as a waitress, eventually becoming his assistant and lover. The evolution of their relationship is what makes Phantom Thread an incredibly unique film, and more so, a Paul Thomas Anderson film. That is to say, we are not seeing a normal romance film about the bourgeoisie in 50s London — although we are. There is much more beneath the surface of Phantom Thread, and particularly the implications of its ending, that make it a haunting and beautiful experience. It is a portrait of its time and a love letter to fashion, but Phantom Thread works as much more than that. It is a subversion of the romance genre in a way that may be described as a form of subtle sadomasochism. 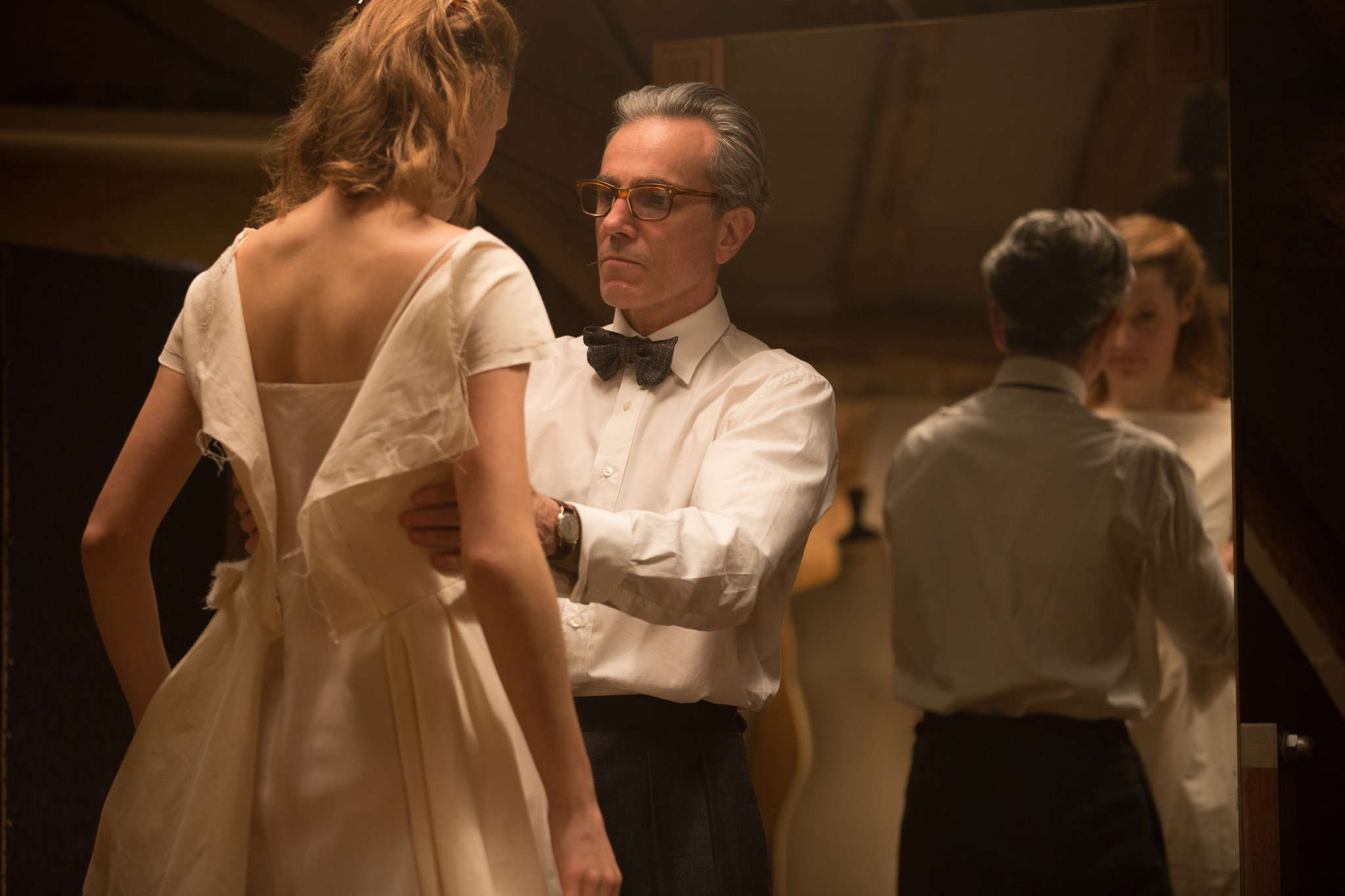 Additionally, there are numerous subtleties in Phantom Thread that cannot be overlooked. Its use of food, for example, is extravagant. Not only will every dish in this film make your mouth water, but the way it plays into the dialog and situational humor with its use of piercing sounds, as an example of a nuisance, become something a running joke throughout the film. This reaches its peaks when Woodcock screams about the interruptions of tea and when Woodcock and Alma share a dinner in which he accuses her of being a special agent with a gun. As stated, this film is sharply witty in its dialog, coupled nicely with Anderson’s gorgeous cinematography, immaculate costume design, and of course, Jonny Greenwood’s elegantly dreamy score. Vicki Krieps is a powerhouse as Day-Lewis‘ counterpart, just as Lesley Manville is as his sister. Furthermore, Phantom Thread has much to say about familial bonds, the maddening drive to acclaim, and how far one can submit oneself to another for the sake of love. For fans of slow-burn drama films, romance films, or Paul Thomas Anderson films alike, Phantom Thread is not one to be missed.