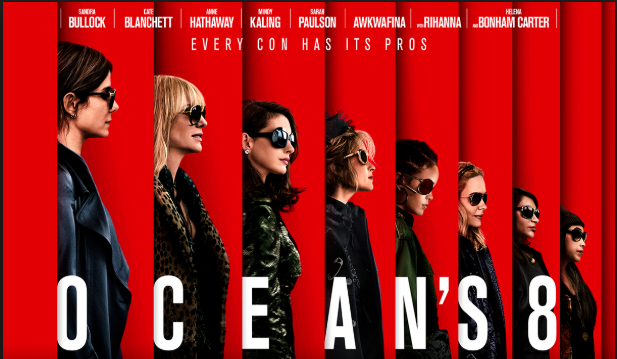 For Ocean’s 8, the star enters new ground by heading an all-female heist film. Like her brother, Debbie has spent time in prison, and when she gets out, she wants to get paid and she wants to get even. She contacts her friend Lou (the fabulous Cate Blanchet) to assemble a team with enough savvy to target one of the most exclusive parties in the world: NYC’s Met Gala, where the rich and famous wear their best jewels. The Met Gala is also notable because many jewelers open their vaults to lend their best pieces to the celebrities, making the occasion one of the only times that these jewels are seen by the rest of the world. Unbeknownst to her cohorts, Debbie has more than one target at The Met, and her secret agenda may endanger the entire heist.

As a film, Ocean’s 8 is more than capable; it is fun and breezy. The leading ladies seem to be having fun, and one can’t help but be charmed by their quirks and their camaraderie. Bullock is a strong and capable lead, while Blanchett brings the cool and makes everything seem effortless. Unfortunately, despite the best efforts of a very talented cast, the film feels like a point-by-point remake, rather than sequel to, Ocean’s 11. Debbie has the same tendency to combine business with personal problems, and Lou becomes a clear analog for Brad Pitt’s character in the earlier films, warning of the dangers inherent in jeopardizing the mission to pursue personal vendettas. Luckily, the other members of the team feel like fresh characters. Awkwafina and Helena Bonham Carter stand out in hilarious supporting roles, the former as a talented pickpocket, and the latter as a bonkers dress designer, long past her prime, and desperately in debt. Anne Hathaway has a lot of fun as the target of the heist: a vacuous, impetuous celebrity attending the gala.

Aside from its new cast, the most notable change in this Ocean’s entry is the locale. The series has had varying degrees of success with the different cities that have served as backdrops to the story. Ocean’s 11 was particularly successful in immersing the audience in Las Vegas culture. It played to its most famous casinos, as well as its somewhat sketchy underground gambling dens. Its sequels ran into problems when they left Vegas; the stories in Europe felt contrived and touristy, rather than an organic outgrowth of the story. In Ocean’s 8, the New York setting is used to its full advantage. The urban beauty of both Central Park and The Metropolitan Museum of Art is on full display, and the luxurious setting is complemented by a display of jewels and costumes to match. The feel of the East Coast definitely adds something different to the proceedings.

Ocean’s 8 premieres on HBO and HBO platforms on January 12th at 8:00pm ET.