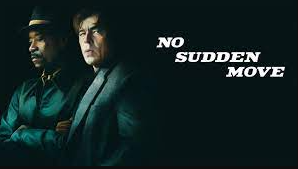 It’s odd that Steven Soderbergh’s apparent retirement from filmmaking isn’t a more frequent topic of discussion. It’s literally like it never happened, and he’s seemingly as prolific a director as he’s ever been. Sure, he doesn’t churn out two pictures a year like he used to (that Traffic and Erin Brockovich were released and Oscar-nominated in the same year is just mindblowing), but with streaming services offering another layered platform for his releases now, we’re back to what can be regarded as a more traditional release consistency. Sometimes, this is a good thing, and sometimes it’s a bad thing. Art takes time. Just ask James Cameron. 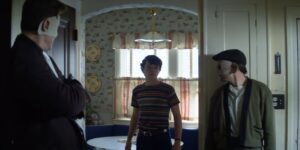 In the case of Soderbergh’s straight to HBO Max 2021 offering No Sudden Move, it’s just not a great thing. Sporting a more-than-willing knockout cast, it’s plenty entertaining for the first hour as the plotting takes shape. In typical Soderbergh style when he’s ‘on one’ heist-wise, there are threads and there are arcs, and they crisscross and unwind here, there and everywhere. The main difference is, however, that in the context of the Ocean’s movies and something like Logan Lucky, it was fun. No Sudden Move is sodden with a plot, and ultimately, though you can appreciate that the characters care and that there are stakes, it is often alienating for the viewer. 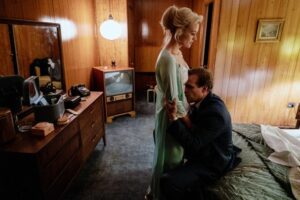 The set-up is simple enough, and so it should be. Don Cheadle and Benicio del Toro are apparent career criminals tossed together by Brendan Fraser for a quick and painless lift job. David Harbour has access to an in-demand document located inside a safe in his boss’ office. The angle is to bust into his house and babysit his family (at gunpoint) for a bit while he is sent to fetch the thing. What it is or why it has value, no one knows – not even our two hapless crims. What becomes increasingly frustrating is that until all double-crosses and character reveals are complete, this is the name of the game. In addition to this ongoing mystery surrounding the ‘document’, seemingly key players are referenced repeatedly throughout and are known to the characters, but the viewer is left out of the loop. This sort of creative tactic can work as Soderbergh has shown in the past, but when it’s this joyless and emotionally unengaging, by the time you are deemed allowed to know what’s going on, unfortunately, you are likely to be well past caring.

Curious creative decision-making doesn’t end there, though. Why this film was shot almost exclusively through a fisheye lens (16mm at best) is well beyond any of us. One can only assume that it was in an effort to supplement a taut, compact narrative, but in reality, is entirely distracting and feels in contrast to the period. 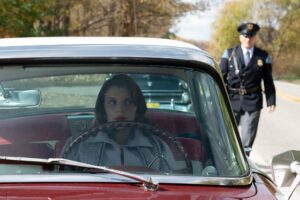 While on the topic of things that don’t align with a film set in 1954 Detroit, Julia Fox’s natural accent is inexcusable. It’s difficult to go on the offensive to her detriment because she was so fantastic in Uncut Gems, but that was the Safdies really playing to her strength. In this setting, and with the density of this plotting, it isn’t really her fault that she will be conceived by many as utterly out of place. It’s just bad casting, which is a shame for those who rightly looked forward to how she followed up her debut.

It’s not that Soderbergh is hit and miss necessarily, it’s just that for every Traffic, there is a Haywire. And, where his films of the heist ilk can usually be relied upon to at least be entertaining, No Sudden Move generally feels so within itself that it’s forgotten about the rest of us who are relying on it for – in the least – an engaging good time.

No Sudden Move is streaming now on HBO Max.