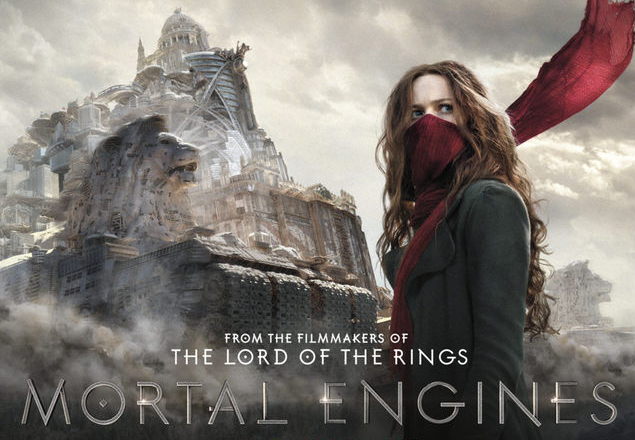 In this futuristic movie, larger cities lay waste to smaller ones after a terrible nuclear disaster has taken place and wiped out a lot of people and their countries. In this world, old gadgets and technology are highly valued. Large cities are mounted on wheels or treads like armored tanks( you read that correctly) and move across the landscape swallowing up smaller municipalities in their wake. There are, however, some places that still hold fast and make their own societies known as the Anti-TractionLeague. You might think of David and Goliath (huge guy trying to beat down the smaller guy).

The ‘huge guy’, so to speak, in Mortal Engines is the bad man a pompous ass who happens to be the Head of the Guild of Historians. We get all these constructs because the movie does try to build a believable world out of all this. The ‘smaller guy’ would be a mysterious woman named Hester Shaw (she has good reasons 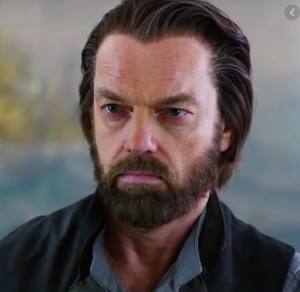 for taking on the dominant mobile class) and a chap named Tom Natsworthy. Tom (played by Robert Sheehan of Love/Hate) is an apprentice in the Guild of Historians and as you might guess he tries to help Hester Shaw (Iceland’s Hera Hilmar) when she is unsuccessful in her attempt to murder god-awful Thaddeus Valentine (Hugo Weaving of The Lord of the Rings franchise) aboard his rolling city. It seems that Hester knows a thing or two about the powerful villain and she wants to settle a long overdue score.

Tom and Hester find themselves in the unenviable position of being on the run, hunted down, scared out of their wits, hungry and not knowing what comes next. While on the move, they manage to make it to a small mobile city, Scuttlebug (like the name) but they end up in custody and are about to be sold as slaves. It’s like taking a bad, unproductive trip where you get bad food, a broken AC, run out of gas and lost to boot. It just all goes bad. Valentine, for his measure, knows some seedy folks and hires a nasty cyborg, Shrike (pictured) to pursue and kill Hester. It seems that Valentine has some secrets that he’d like to keep and wants to tie up all his loose ends. 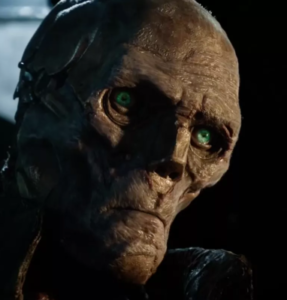 What we find out is that Shrike isn’t such a bad fellow – he helped to raise Hester when she was young. During the panic and mayhem of Tom and Hester in the cell and about to be sold, an agent by the name of Anna Fang rescues them. We find out a bit of Hester’s history and the significance of the necklace she has – it was given to her before her mother, Pandora was killed by Valentine. This necklace becomes a key feature in the plot of Mortal Engines. You knew the reveal of her hatred had to surface, right?

It turns out that Valentine’s daughter, Katherine, does not share the same views as her father and the two drift apart. Katherine learns of her father’s attempt to get rid of Tom and this only further estranges her from Valentine. Fang, Hester and Tom arrive at Airhaven (a mobile city) and find out the significance of what MEDUSA is: a powerful superweapon that was used by their enemies to blast through the Earth’s surface, crack and destroy the continents’ positions and completely turn the continents into scorched parcels of land. And Valentine has not been resting on his laurels, either – he’s had his scientists build another model of MEDUSA. What all this has to do with the uniquely created ambulatory cities was a misconnect in this work.

Anyway, the necklace that Hester has plays a vital role in the prevention of further destruction of what’s left in the free cities. Valentine – an awful man, no doubt, ends up being revealed as.. (oops, can’t give that away, but you should be able to guess).  Destruction and chaos are prevented, young love blossoms between Hester and Tom, Valentine hets what he deserves and all is well in the world again. This movie was okay but you really shouldn’t watch a movie for the visuals alone. Make your own call though when Mortal Engines debuts across HBO’s platforms Saturday, August 24 at 8:00pm. Maybe the trailer will help you decide: