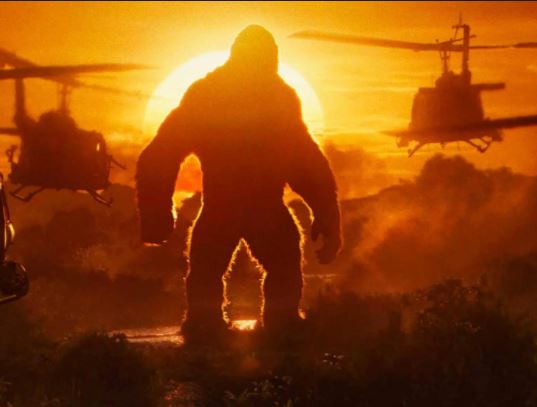 I don’t know about you, but if I witnessed a massive, tall as a building freakin’ ape, I would not bother him. In fact, I’d leave the beast alone. Want to know why? Because Kong never did anything to me. Another thing: why is it that we humans think we’re so smart and that we think it’s our God-given right to study an animal like this, in his natural habitat, without thinking of the harm we could potentially cause Kong? Because humans are arrogant and selfish, that’s why. If you haven’t already figured it out by now, I am on Kong’s side in Kong: Skull Island.

Step back to WWII: it’s 1944 and on an island somewhere in the South Pacific, two pilots – Hank Marlow (USA) and Gunpei Ikari (Japan) have repeatedly tried to machine gun each other down to the death but instead parachute to safety (or so they think) onto land. Not so lucky for them, their encounter is interrupted by an enormous ape. 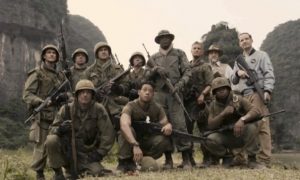 Fast forward to the future: 1973. A time of political and social upheaval, of scientific discoveries and military planning all around the globe. In the US, a covert mission is underway: an expedition to Skull Island. As per usual, we know that humans have a tendency to want to conquer or destroy anything that is in their path, so the expedition is basically a ruse in order for the group of military personnel (Packard played by Samuel L. Jackson, Chapman played by Tony Kebbell and Cole played by Shea Whigham) to study the island, decimate it (via explosives) and try to grade the landscape according to their needs. BIG MISTAKE. Something was lurking in the leafy shadows of the steamy jungle. Something that didn’t like the explosions, the intrusions or the barbarism displayed. Again, I’m Team Kong. And Kong takes care of a number of military personnel, crushing them. The rest of the people on the expedition is made up of military folks, a photojournalist (Brie Larson), a biologist, and a former British air force captain played by Tom Hiddleston). In any type of crisis or disaster situation, people’s nerves become frayed, tensions run high, the strong prey upon the weak and people tend to make rash decisions, based on fear. All of that is in play.

Several survivors are grouped together and eventually come across a native tribe called the Iwi. Surprisingly enough, we also encounter a much older Hank Marlow (John C. Reilly) who reveals that Kong is the revered God of the island, worshipped by the Iwi and protects the Skull Island from all harm, including a group of underground monsters, known only as The Skull Crawlers. Kong destroyed all the explosives, as the harmful vibrations from the seismology equipment would bring those monsters to the surface and wreak havoc. We find out that Kong is the last of his kind, as the Skull Crawlers literally wiped out his species. 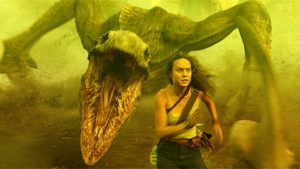 We see Skull Crawlers attack several people on the expedition, killing Chapman. A winged creature ends up killing another guy. It’s feast or famine at this point, with the creatures having the upper hand. The group of survivors, now desperate to get off the island, is led by Marlow to a graveyard that contains all of Kong’s deceased relatives. Several violent encounters and gruesome deaths later, Packard, fueled by hatred towards Kong, is ready to kill him. Conrad and  Larson’s Weaver, however, encounter the awesome ape which changes their perspective – especially when they see how Kong is: a protector of the plants, animals and humans on Skull Island – and they have a change of heart. One nasty guy meets a grisly fate (but I didn’t feel sorry for him at all). The photojournalist – a woman named Mason – is rescued by Kong – proving that he’s not malevolent. A Skull Crawler comes to the surface – igniting fear and chaos – and Kong battles it to the end. The rest of the motley crew manages to escape, but not before witnessing Kong pulverize the Skull Crawler to bits and pieces.

This movie, filled with plenty of amazing visuals is one of a long line of “man versus beast” stylized movies. If you like action, history and a sense of karmic justice, then Kong; Skull Island is for you. You can’t help but root for the beast: as the last of his kind, he has to take a stand and protect his realm. Like I said, I enjoyed watching Kong in action; further proof that you don’t go meddling in places that are untouched. Because you just never know what’s watching you, waiting for you to make one wrong turn, one last move. King Kong is the hero here without a doubt.