Biopics are a weird one, because unless you are going to push the boat out creatively, you are more or less committing to standard, passable fare that may appeal to awards bodies from a performance aspect, but fail to retain interest beyond the gongs being handed out.

Reinaldo Marcus Green’s King Richard marginally evolves beyond this stereotype, in that the film’s namesake is a left field choice for a biopic focus in the first place. If everyone is honest with themselves, no one really cares about Richard Williams. They care about his daughters, and their achievements as two of the greatest sportswomen of all time. Why then, in a time when the film industry is rightfully challenged to pursue gender equality, would anyone think that film focusing on a man who hasn’t been relevant for 20 years (and barely, then) is the appropriate way to frame the story of Venus and Serena’s upbringing and early successes? The intent is certainly not to imply that he is to be credited for their achievements, regardless of his influence. So, why go through the trouble at all? 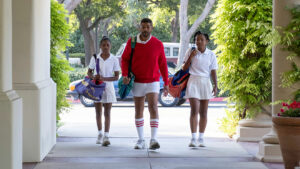 Had Green been able to go all in on portraying Williams for the man he was (countless abandoned kids barely referenced, for one), King Richard could have reached considerably higher heights. As the credits roll, however, and the Williams sisters are seen as executive producers on the picture, it should come as no surprise then that this was always going to be a softer touch of a movie.

The final product is plenty decent by all accounts, and perfectly enjoyable. But, it is neither gritty enough or emotionally engrossing enough to make a lasting impression. As you watch Venus and Serena willingly and gleefully practice volleys in the rain, it does well to highlight the determination of the entire family to get these girls to the level they all believe can be reached, and it makes for pleasant viewing. However, it’s not without questions about the real life counterparts that you can’t help but wonder about. What really drove Richard Williams? Was it for his daughters to change sports and represent black female athletes in an evolutionary way as we know them to have done, or was it sheer ego? Or, was it that first $12m contract that he supported Venus in holding out for? You just never get to know enough about the man beyond the Richard Williams front that is painted superbly by Will Smith in what is comfortably one of his best performances.

Were Venus and Serena as completely onboard with their dad’s ‘plan’ and regimen as the film makes out? Or were there days where they didn’t want to practice, or be moulded exactly as their father envisioned? Just addressing these two questions alone would have made King Richard an altogether stronger film, but again, this is no Spencer. It is a film partially funded by the film’s secondary subjects, and the result is just fine. It’s also almost two-and-a-half hours long, which is baffling considering the tone and content.

Jon Bernthal’s introduction as Ric Macci midway through is a more than welcome injection of floppy haired energy, and from a further supporting standout, Saniyya Sidney is quietly outstanding as the teenage Venus, but let us make no bones about it, this is Will Smith’s movie. He’s good enough to push the film, as a whole, beyond mere performance awards fodder, but had he the support of a story that took more risks in how much it revealed of the man himself, perhaps it would be altogether more memorable.

King Richard has just finished it’s run on HBO Max, and will be debuting on HBO in the new year.