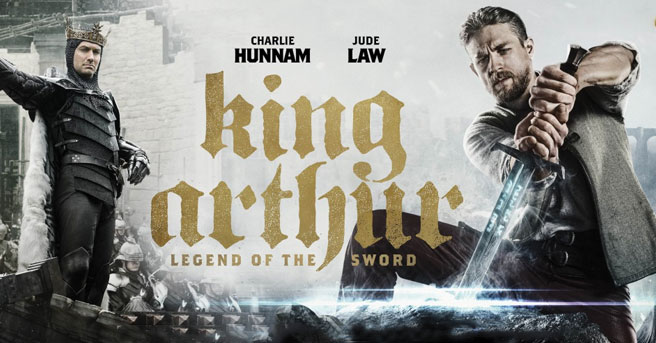 In this retelling of the famous legend of King Arthur, King Arthur: Legend of the Sword, Guy Ritchie presents a much different version than the romantic tales we’ve learned about in books. In this retelling, we see a very different side to the Pendragon bloodline, complete with black magic, supernatural forces, brute strength and of course, good versus evil.

Eric Bana plays King Uther Pendragon, who fought against the dark forces led by Mordred. The battle scenes are over the top – complete with enormous elephants, magic spells, black magic, fire, supernatural soldiers and chaos all around. Charlie Hunnam portrays Arthur – a street-smart, slightly sarcastic but cunning young man who was raised in a brothel, learning from the school of hard knocks (literally) – a man who is haunted by dark dreams and visions of dark magic, a little boy and a king and queen. If you look at what Arthur is experiencing from a current perspective, one could say he is suffering from Post Traumatic Stress Disorder. As a young child, he witnessed the murder of both his parents by a strange, brutish underworld figure – and you wonder why he has horrendous nightmares of the same thing over and over again. What does it all mean? 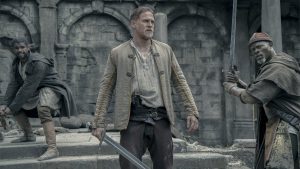 We see Arthur growing up lean and witty; training with a karate master; protecting the prostitutes from abusive customers and championing the underdogs of society. This is a man who isn’t exactly made up of majestic mannerism and courtly intrigue. After a lengthy period of time, Arthur’s presence is made known in Londinium through a display of strength – pulling the sword Excalibur from the stone – which is cause for alarm and fear on Vortigern’s part (portrayed by Jude Law with an icy demeanor). After all, the ghost of the past has now come to call in the form of a nephew, thought to be long dead. Vortigern rules through fear and superstition. The people who live in his kingdom don’t know any better. Vortigern’s men are all loyal to him (or perhaps they do not want to make an enemy out of their King, so they follow because they fear him).

However, what is revealed to Arthur is that he is the true born heir to the Pendragon throne, which was ruthlessly and malevolently taken from Arthur’s father by his own brother, Vortigern. Crowns do queer things to those who wear them – you can use that kingly power for good or for evil. Vortigern was never content to be a brother to King Uther; and as a Prince in his own right he had power, wealth and position – but it wasn’t enough. Vortigern consorted with dark forces to kill his wife, his brother and sister-in-law. Power corrupts men and in the medieval times, power was either inherited or it was taken by sheer force. Vortigern, consumed by jealousy, forged a terrible pact with Mordred, a powerful warlock – Uther’s life for the throne and magical power.

Arthur’s thirst for vengeance and wanting to right all wrongs is also shared by a few people who once knew his father. Several fighters come together to reveal to Arthur the past events, the tragedy of his father’s untimely death and what must happen in order for justice to prevail and smash down Vortigern’s evil reign of terror.  Goosefat Bill – an archer – has an ax to grind with several of Vortigern’s top ranking men. You’ll recognize Bill, as he’s portrayed by Aiden Gillen, aka Petyr Baelish of Game of Thrones. Djimon Hounsou portrays Sir Bedivere, Uther’s former soldier and lead ranking knight.  Recognizing that Arthur is the true heir and wanting to help him understand his path, these men team up with Mage, a woman with supernatural powers, to help Arthur win back his crown, title and place in society. 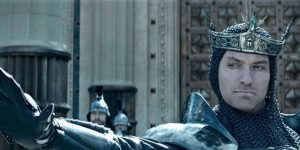 Arthur is initially resistant to the thought of taking on Vortigern; he doesn’t quite accept the powers that Excalibur has and this creates strife. Anyone who has ever been faced with a life-altering decision knows that there’s a lot of confusion, heartache and stress involved. Arthur undergoes training; his friends and mentors fight to flee the city and attempt to kill Vortigern. Unfortunately, several friends are wounded in the process and a few are killed. Angry, frustrated beyond belief and grief-stricken over the loss of several comrades, Arthur takes his anger out on the sword, only to whip it into the lake. The Lady of the Lake appears in a mystical trance and shows Arthur a vision of the future if he does not challenge his uncle. The music adds a slightly bittersweet, destitute tone to what our hero is feeling. She places Excalibur back into Arthur’s hand.

It is Mage who produces an eerie, almost drug-induced heightened state of awareness within Arthur – through a snake bite – and he slowly makes his way towards Vortigern’s stronghold. Coming to terms with his destiny, Arthur embraces the sword and its’ power, in order to have one final fight against Vortigern, with the support of his comrades and with a plan in place. In the hero’s journey, we all know that he must face one final ordeal in order to grow as a character and take his rightful place in the world. It’s an over the top battle sequence but I enjoyed all the special effects.

If you like movies that take place in the medieval era and also enjoy a more revitalized storyline complete with CGI, lots of battle scenes and more of a supernatural element, then you may wish to check out King Arthur Legend of the Sword.