This is the first of three posts that have been created by a guest writer for HBOWatch. If what’s offered is seen favorably then LYNDA FERNANDES will soon be a permanent writer for the site. Good luck, Lynda!

Steven Soderbergh and David Koepp’s latest film, KIMI, starring Zoe Kravitz, show us why it sometimes pays to be paranoid. This film will hit a soft spot with anyone who watches it because it’s relevant with the times as it takes place during the Covid pandemic. We’re reminded of the power of technology and anxiety, and how our devices are always listening. It’s a psychological thriller that leaves you at the edge of your seat. Despite the safety we may feel in our homes, KIMI shines a disturbing light on nosey neighbors peeking through the looking glass, and attentive technology is always on standby, waiting to be awoken.

KIMI is a voice-controlled virtual assistant, similar to Alexa. Kravitz plays a skillful voice stream interpreter for KIMI, named Angela Childs, who suffers from agoraphobia—a severe anxiety disorder that leaves you in fear of potentially becoming trapped in any exterior setting. This keeps her comfortably, and uncomfortably, locked inside her Seattle loft where she has full control. Angela’s disorder stems from a past trauma she endured when being physically assaulted that only snowballed through the pandemic. At first, her extreme notions may seem aggressive, but once things take a turn Angela’s worst fears come true after stumbling across a triggering recording from a KIMI user, justifying all of her suspicions and reinforcing her phobia.

Soderbergh does a great job creating causally appeasing visuals during Koepp’s moments of silence; intertwined they guide us effortlessly through points of stillness and tension. Cliff Martinez’s soundtrack has hints of playful chords, reminiscent of those of Home Alone; oddly enough that is exactly what Angela is on most days when she’s not banging her neighbor. The contradicting reality that having your privacy invaded 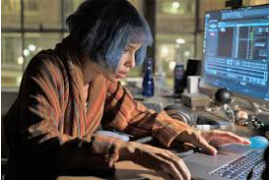 and your every move watched could potentially save your life, or expose some bad guys, really plays with your emotions as you teeter with these possibilities throughout the film. The ending shifts into this comical conclusion, with a light, corny send-off, which for some may disrupt their illusions and take away from its momentum. There are some similarities between the classics: Blow Out, Rear Window, and Home Alone (side note: Home Alone actor, Devin Ratray, ironically plays a character named Kevin in the film). However, KIMI still stands alone, despite similar tones, without begging for too much attention.