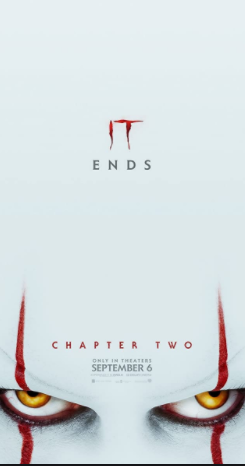 Director Andy Muschietti returns for the second and final installment of It, based on the novel by Stephen King. The first part of the film went through several attempts at development, including an abandoned script by True Detective‘s Cary Fukunaga. It finally saw the light of day in 2017, using a script by Gary Dauberman.

As a refresher, the first part of It tells the story of 7 children in Derry, Maine. Each of the children is considered an outsider, and they embrace the term Losers to describe their shared bond as victims of various bullies and residents of the town. Over the course of one summer, the kids realize that there is a supernatural power in Derry, one which takes on many forms, most famously, that of a clown named Pennywise (Bill Skarsgård). This malignant being feeds on the fear of Derry’s residents, and kills the town’s children every 27 years, before returning to a prolonged slumber. At the end of film one, the children take on the clown under the town’s sewers and defeat it back into its lair. They take a blood oath to return to Derry if Pennywise comes back.

Chapter Two begins 27 years after the events of the first film. The Losers are now adults, and all but one have moved away from Derry. Mike (Isaiah Mustafa) has decided to stay behind and research the history of It, and to monitor any activity that could indicate a resurgence of It. When several people begin to disappear and die, Mike decides that it’s time to call the Losers back into town. The folks who left Derry have forgotten most of the events surrounding Pennywise, their memories largely and supernaturally foggy due to their distance from the evil town they left behind. They do, however, remember their oath to return. When Mike calls, each has to decide whether they are ready to confront the memories they have repressed in the town they’ve all grown to dread.

I’ve always believed that Chapter Two is the hardest part of the book to adapt. In the book itself, as well as the 1990 miniseries, the adult part of the story is where it falls apart. As a villain, Pennywise/It is designed to terrorize and feed on children. It feels odd to have a clown chasing grownups. Beyond that, the second part brings the Losers to Derry without showing us much of their adult lives. Viewers spent a lot of time with them as children, we became invested in their struggles, and the problems they faced in the course of their regular lives. This is not the case with the adults (despite a wonderful adult cast that perfectly matches the compelling kids from the first movie). We do spend time with the adults in Derry, but we don’t receive a lot of information about the things they’re struggling with as adult people. Sure, we see hints that they’ve fallen into old patterns (like abusive family members), but we barely see their adult lives, so it feels like they’re in a state of arrested development, which renders them rather pathetic. Of course, that is the point, that they can’t move on or properly build adult lives because they haven’t conquered the issues they left behind, but even if that is the central metaphor (and it is), then it still means that we are less invested in these people as adults. We only know and care about the children they used to be. 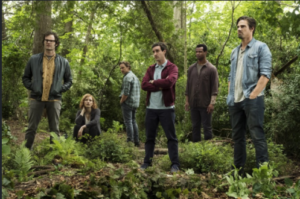 Chapter Two looks and sounds great. Despite some really well-paced sequences, however, the movie’s overall pace seems off and meandering. Many of the self-contained sequences themselves are very suspenseful: a carnival in the beginning of the film, another with a little girl who wanders off from her mother in the middle of a ball game, and yet another in which Beverly visits her old apartment. These all build slowly and have momentum as they move towards their conclusions. That is not the case with the film, which starts and goes, starts and goes. This is, of course, due to the fact that the narrative separates the characters to have them each confront their memories individually. In the end, this repetition makes the pacing of the film feel too long.

The bigger problem that Chapter Two faces is sense, or the lack thereof. It would be inaccurate to say that fantasy, sci-fi, or horror lack logic, even when the characters inhabit supernatural worlds or face supernatural phenomena. When these genres are successful, they contain an internal logic and mechanics, even if those do not mirror the laws of our world. For example, the dragons in Game of Thrones don’t speak, nor do they teleport. We would feel really cheated as viewers if the world established one rule for these fantastical creatures, then broke that rule. Or worse yet, if it established no rules, at all. The best fantasy lays down a set of internal rules, and if it then breaks those rules, it does so through a phenomenon or procedure explained inside the narrative itself. It Chapter Two tries to establish such a procedure, one introduced by Mike early on in the film. He has discovered, through years of research, a way to defeat It. Though I won’t reveal the particulars of the plan, nor how it plays out, I will say that as a viewer it is very frustrating to navigate a world in which nothing makes sense, there are no internal rules, and it feels like every character is pulling out plot-points out of thin air. It becomes an almost laughable exercise of “the plot needs it, so here it is” when events should happen in a way that feels organic, building on what came before.

Despite my problems with the plot and pacing, the actors are phenomenal, and they work really well together. James McAvoy and Jessica Chastain are always wonderful to watch, but I was particularly surprised by Bill Hader, here giving one of his most nuanced and touching performances. I wish Isaiah Mustafa and Jay Ryan had been given more to do, as I really liked what I saw of them in this film.

Overall, It Chapter Two is worth watching, especially if you watched the first part, and if you’re looking for some good scares. It premieres on HBO and all HBO platforms on April 11th at 8:00pm.