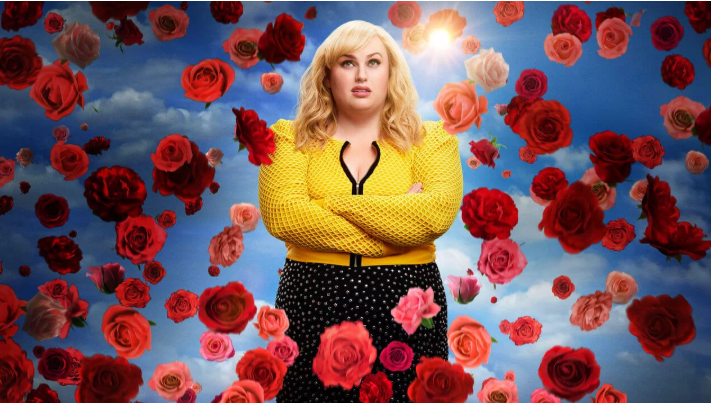 I’m not a huge fan of romantic comedies. Call me a Debbie Downer but I find that so many of them are rooted in make-believe and have unrealistic expectations and the plot lines are full of holes. I’d rather watch wet paint dry (I’m more of a science fiction, fantasy and action-adventure kind of gal).

Isn’t It Romantic features Rebel Wilson (if you’ve seen the movie Bridesmaids, she’s got a part in the beginning and is hilarious in it) as an architect who has no luck in the love life department. Funny I should mention my dislike for romantic movies because Rebel’s character, Natalie, can’t stand them either and is a realist: she hated them in her teens and clearly suffers from some self-esteem issues. This carries into adulthood and you can see that Natalie struggles when it comes to the opposite sex. 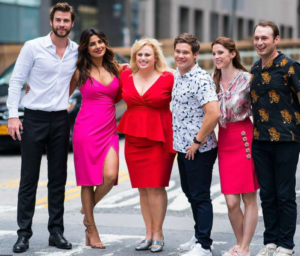 Personally, she’s got a good career and should focus on building up her confidence, that way she won’t appear desperate or a man-hater, because if you rush into a relationship just for the sake of saying you have one, it usually ends up fizzling out fast. Natalie has an assistant (who is one of the wrestlers from GLOW – Betty Gilpin) named Whitney. Whitney just happens to be a huge romantic comedy fan and you can tell this annoys Natalie to no end. Whitney plants the seed in Natalie’s mind that a colleague of theirs, Joshua, has secret feelings for her. Of course, Josh (Adam DeVine of HBO’s The Righteous Gemstones)  looks like a love-struck doofus and has moments where he tends to be staring mindlessly out the window. We find out that Josh stares out the window at a giant advertisement which has a beautiful model splashed all over it. The model in question is a woman named Isabella (portrayed by Priyanka Chopra Jonas) and well, she is indeed a stunning woman.

Natalie is almost mugged and gets knocked out. When she regains consciousness, she finds herself in her own romantic movie styled plotline – which she can’t stand but really has no choice in the dramatic change of circumstances in her life. People she was friends with prior to being attacked and mugged are now her enemies in this altered reality. Whitney and her no longer talk. Her neighbor Daniel is now gay and dispenses all sorts of (unwarranted) romantic advice and much to Natalie’s chagrin, she finds herself receiving the flattering attention of a wealthy client, Blake (portrayed by Liam Hemsworth) which is too good to be true. And when things are too good to be true, they usually are and the illusion ends. Here is a good place for that trailer, I think.

Natalie finds out that Josh is not only in a relationship with Isabella (the stunning model), but that they are engaged. Her relationship with Blake ends up taking a steep plunge south (which I had correctly predicted) and she comes to the realization that she indeed does have feelings for Josh. Oh, the conundrum. Oh, the drama! What’s a girl to do?! Natalie comes to the very frank understanding that she could attempt to stop Josh’s wedding to Isabella, but really and truly, does she want to be responsible for hurting two people who have never hurt her? Does she want to upset Josh that much? Common sense prevails and Natalie understands that the most important relationship someone has is with themselves first and foremost. If you don’t have the confidence and self-esteem to respect yourself 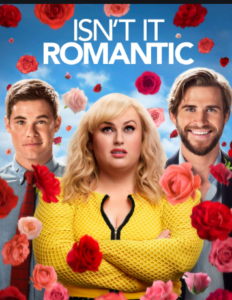 above all else, then how can you go out into the world and try to find that in a relationship with a significant other? After having these deep thoughts, Natalie winds up in a car accident and loses consciousness. And just like that, she back in the real world and has a little more bounce in her step.

Using some business savvy (hatching an idea to wealth guy Blake) and meeting up with Josh, it dawns on her that Josh was looking at her (well, her reflection) and that they both had unspoken feelings for each other. Well, how about that? For someone who hated romantic comedies, Natalie was front row center in her own. Isn’t It Romantic has some giggles and some eye candy to swoon over. But in my humble opinion, that’s about it.

But if you love your dose of rom-com, by all means, Rebel Wilson and crew can give you a story it debuts SATURDAY, September 28 at 8:00pm on HBO and will appear on the streaming sites too. Ah, Isn’t It Romantic? Well, for some.