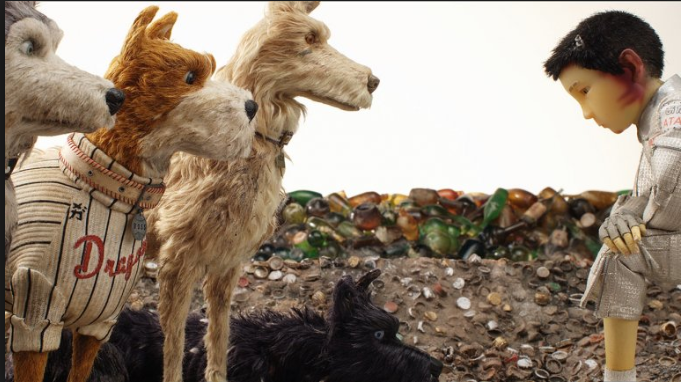 Making a film is a synthesis of art and science, that when done correctly yields a beautiful mistake. Not in the sense of error, but in the sense of how did we get here? Wes Anderson films always take audiences to places that exist somewhere between realistic and surrealistic worlds. Anderson’s latest effort manages to give audiences what to expect from a highly perceptible auteur without churning out a predictable and uneventful film.  Isle of Dogs follows the exploits of a motley crew of canines, and Atari Kobayashi, the nephew of Mayor Kobayashi, the latter being the film’s primary antagonist.

Synopsis. Sometime in the near future, a deadly strain of virus spreads throughout the canine population, with a risk of crossing to humans. During his unprecedented sixth term (and with others unwanted), authoritarian Mayor Kobayashi orders that all dogs are exiled to Trash Island. The first four-legged occupant of Trash Island is Spots, who is owned by no other than our human hero Atari. Months after Spots was exiled, Atari commandeers an aircraft and crash lands on Trash Island to rescue Spots. Before this time, many more dogs now are stricken to the Alcatraz of animal prisons. Wes Anderson always has a knack for not only writing and telling a story but getting the correct cast to execute the written prose. Voice acting may not have the physicality of live action acting, but the presence of the stellar Isle of Dogs cast is immediately noticeable.  Bryan Cranston as Chief leads that a pack of dogs that assist Atari on locating his beloved Spots. Bill Murray (a Wes Anderson regular), Bob Balaban, Ken Wantanabe, and France McDormand are just a few of the voices to the human and canine characters.  No one is sleepily reading through this humorous and engaging script.

Isle of Dogs has the same superb aesthetics and appropriate fast pacing as Anderson’s live-action films, and his previous stop-motion film The Fantastic Mr. Fox.  The suitably washed-out color pallets and superb attention to detail sets are the courtesy of weeks of animation and real-world research.  Many scenes were inspired by East London, where much of the production was done.  Many of the scenes feature deep focus cinematography, where the background’s clarity is akin to the foreground’s clarity.  This makes a very visceral experience, for the audience can concurrently see how that action of things taking place far away effect events in the foreground.  This film’s techniques at times remind me of Citizen Kane, a film that is considered by many film buffs and professionals to be the greatest film ever made.

I have elaborated so much on the technical prowess and talent involved in this film, but I want to emphasize that the movie is just plain fun. I will leave readers with a continuation of the brief synopsis of Isle of Dogs, and then intentionally stop on a cliffhanger.

Later in the journey, Chief and Atari are separated from the other dogs. Atari gives Chief a bath, which reveals that his coat is actually white. Noticing the similarity between Chief and Spots, Atari realizes they must be of the same extremely rare breed. Chief remembers being part of a litter of which all but one died. He bonds with Atari as they continue their journey. As they rejoin the group, they are ambushed by Kobayashi’s men. Spots arrives with the cannibal tribe, and they fend off the assailants together, causing Kobayashi to declare Atari to be dead. Spots confirms that Chief is his brother, and reveals that he was rescued by a mysterious tribe. Because of these circumstances, Spots asks to transfer his protection duties for Atari to Chief, which is granted. Mayor Kobayashi has a change of heart and attempts to end his horrific canine concentration camp, only to deal with a new threat.