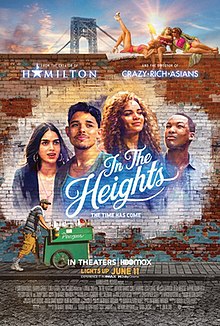 Lin Manuel-Miranda has some kind of talent, I have to say. Being a toddler teacher, I’m well familiar with the Moana soundtrack and can appreciate Lin’s ability to turn a phrase. When Hamilton hit it big and all my friends were seeing it on stage, I was curious. It hit Disney+ and I could easily see how this show got huge. What I didn’t realize at the time was that Hamilton wasn’t his first show. In fact, In the Heights made it big and got optioned for film ages ago. But after getting passed over and then switching hands, it finally landed and aired over 12 years later. In the Heights will solidify Lin’s talent even more, because there’s a passion present, seen less in his other works. It offers a connection to his own history and a desire to share it with the world.  The movie, right now at least, is in cinemas and on the full version of HBO Max (for a limited time). Without further ado, let’s discuss In the Heights.

You have a dream, right? It might be something small; maybe something big, possibly even actually unrealistic. But most of us live our lives with this picture in our heads of what we want to accomplish or how we want to live. After that, it’s just a matter of what we’re willing to do to get there. In the barrio, everyone’s trying to achieve their dreams. But not all dreams are created equal and neither is the system. For some, especially in the barrio, it’s an uphill battle. Usnavi (Anthony Ramos of the recent season of HBO’s In Treatment) owns a corner bodega, supplying the neighborhood with their coffee. He dreams of returning to the Dominican Republic and his father’s old bar. Those were the best days of his life, and it’s all he’s yearning for again.

And there is Vanessa (Melissa Barrera), a cute girl who works at the salon dreaming of being a fashion designer. Hey, you use the resources you have, and I have a lot of respect for this girl. She’s smart and gets thrown out fabric from the fashion academy trash for her work. And if I know anything about New York, you can get amazing stuff that’s been thrown out! She wants an apartment downtown, but she sees housing discrimination in real-time when she tries by herself to get the place. Another girl from the barrio is Nina (Leslie Grace), the first to “get out” and make it to college. Even there, at an amazing school, this smart, hardworking girl is treated poorly. Her father (Jimmy Smits) runs a cab company, selling off some to send Nina to school. His dispatch Benny (Corey Hawkins) has some history with Nina, the kissy kind. Even the barrio granny, Abuela Claudia (Olga Merediz, repeating her role from the original Broadway run) has dreams, not to mention the familiar faces of Mr. Piragüero (Lin-Manuel) and his nemesis, the Mister Softee driver (Christopher Jackson, George Washington in Hamilton and Benny in the original Broadway In the Heights run).  But how to make our dreams come true? And what happens when it does?

Musically, we’re whisked away and start to sway with the Latin music. The bright, loud songs give you the feel for the barrio. The cultures, the passions, the love; it’s all there in grand musical numbers. I made the foolish mistake of asking my partner if he wanted to watch it with me. I’m a huge musical theater fan, even having done some myself growing up. He is not. He walked out during one of the musical numbers that featured a large part of the cast and couldn’t stop himself from trying to jokingly gyrate. Meanwhile, I could hardly keep myself in my seat during “96,000.” I cried every single tear during “Hundreds of Stories” and was entranced by the romance between Nina and Bennie during “When the Sun Goes Down” especially with the very Inception-like setting.

But in the end, not everyone lives to see their dreams become a reality. Sometimes, one dream can come true only to rip another dream away from you. Or your dreams simply change. So do we all. But we keep the dream alive and continue fighting for it. But going for your dream isn’t easy, especially as a person of color. This film shows what people deal with every day, living their lives, going for their dreams, and coming against a torrent of hate and racism. And it should break your heart because it’s real and it happens every day. People come to the United States because we’re supposedly a place of opportunity. But it is not equal opportunity. Shortly after the film’s release, there was backlash regarding casting diversity. Miranda responded, noting he understood and felt the frustration. He admits to falling short, but he’s dedicated to doing better for his community and I think he will. As long as he’s bringing us a “Carnaval de Barrio,” then I’m definitely along for the ride.