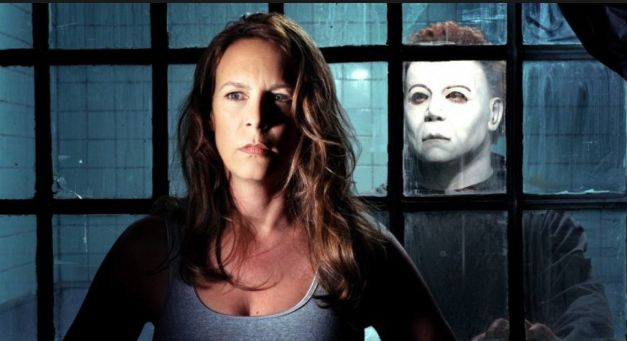 Forget all the silly sequels that came after the 1978 classic horror/slasher movie Halloween. It was in that year that the original Halloween was released under the direction of John Carpenter, with a lot of unknown actors and actresses, with the most notable being Donald Pleasance, who portrayed Dr. Loomis. A young actress named Jamie Lee Curtis starred in the titular role as Laurie Strode, the lone survivor of what was labeled the ‘baby sitter murders’ that took place in Haddonfield, Illinois, October 1978. As mental health awareness and issues have become more prevalent over the years, what we have to understand is that at the end of that original film, Laurie survived a brutally horrendous attack by serial murder Michael Myers. All of her friends were viciously murdered. What’s worse is Dr. Loomis pleaded with the state to have Michael put to death because he knew how psychotic he was – there was no saving him. Here how about this to set the mood?

Well, forty years later, Loomis has died and a new state psychologist was appointed, a Dr. Sartain (who we find out, later on, is a sociopath himself). When the 2018 Halloween movie begins, we find out that Michael was arrested and has been locked up in confinement. But that’s cold comfort to Laurie Strode. What we find out is that there was no counseling, no therapy, no doctors or psychiatrists to treat Laurie back in 1978. She was left to her own devices, sink or swim. Over the decades, Laurie became a woman possessed with one thing on her mind: revenge against the man who turned her world upside down and haunted her every waking thought. We see a woman who is deeply troubled and suffering from an extreme case of Post-Traumatic Stress Disorder. 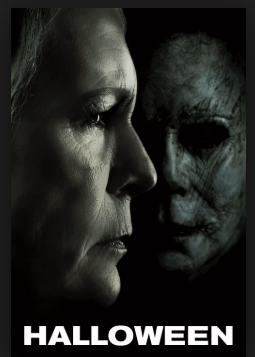 The date that Michael is supposed to be transferred by bus to a maximum facility is October 30, 2018. Ha, something goes terribly wrong – bus failure, a riot with the inmates on the bus or maybe something more sinister – and then the bus crashes. The sheriff who is called in to investigate was one of the original policemen who apprehended Michael back in 1978. Deputy Hawkins is scared – given whom one of the escaped convicts turns out to be. Two documentary journalists have followed the story of Michael Myers and have arrived back to the town where it all began 40 years earlier. They attempt to interview Laurie, only to be turned away. Laurie Strode has no time for people’s bulls**t. Laurie has been watching this and waiting for this day – tracking every single piece of news while preparing herself both physically and mentally for it. She’s alone; twice divorced; an alcoholic and a loner. She has turned her house into a military shelter of sorts – each room has security cameras; the basement is stocked with food and ammunition. She has put a lot of time into carefully placing booby traps in the house, just in case the day would come that she needed to lure someone in and trap them.

Laurie’s life has taken a downward spiral: she’s completely estranged from her daughter and son-in-law and has a granddaughter that she barely knows. We also find out is that Laurie was legally deemed unfit as a mother and had the state take her only child and daughter away from her. This is years of post-traumatic stress and mental/emotional and psychological turmoil because of what happened to her in 1978. Nobody understands just how deep the wounds go; Laurie was alone and had nobody to lean on, to at least help her through the trauma she experienced. How can a person cope and expect to have a normal, functioning life when you’ve been through something as scary and scarring as that?

The investigative journalists are killed by Michael – and this sets off a terrible chain of events. Laurie hears on the news about the bus accident and knows that a reckoning is coming. She becomes increasingly worried about her family and makes many attempts to get them to safety. The lure of Halloween has always been 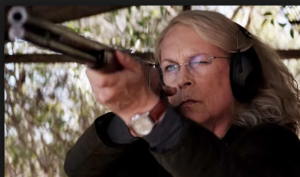 full of cheap thrills and jump scares, but this particular one has a grim ending in sight. Laurie’s granddaughter, Allyson, is out with friends at the high school dance when everything goes to hell. Michael drives around the town and begins to pick off innocent victims, one by one: Allyson’s friends; Deputy Hawkins; unsuspecting people in their homes, other police officers. What better night to cause mayhem and murder then Halloween, when people crowd the streets, children roam around from house to house for candy and lots of people are out partying. Allyson’s friends are murdered and you just know that with each passing murder, each victim is someone in Laurie’s orbit.

The police bring Frank and Karen to Laurie’s home. Unfortunately, Allyson is on the run from Michael, as she witnessed firsthand just how depraved Dr. Sartain turned out to be. She also comes to the terrifying conclusion that her grandmother was right all along. She bolts through the woods towards Laurie’s home. What turns out to be a scary cat and mouse game in Laurie’s house ends up being a knockdown, drag-out, brutal confrontation between the victim and the victor. Frank becomes a casualty because he didn’t take his mother-in-law’s threats seriously. Karen is locked in the basement for her own safety, while Laurie attempts to end things once and for all. Allyson makes an untimely entrance into the home while Laurie and Michael beat each other to a pulp. Michael throws Laurie over the balcony of the second story but when Michael looks down, Laurie is nowhere in sight. (That’s a nod to the first film). Laurie now has the advantage and has become a tough, gritty and determined as hell survivor and Michael has now become her prey. Three generations of Strode women face Myers once and for all. It’s said that when a person overcomes tragedy, heartache or violence, there are no winners, only survivors. It took Karen and Allyson to overcome their fear and ignorance of Michael Myers to finally end things.

We see the house in flames. We see the women hitching a ride back to town in a truck. Laurie is bleeding profusely and in shock. Karen is shaken and Allyson is left holding a large knife (another nod to the original).

And if you stick around through the credits, you hear a song playing…and then at the end, there’s breathing. BREATHING. As in…did Michael Myers survive? Fans can come to their own conclusion on that.