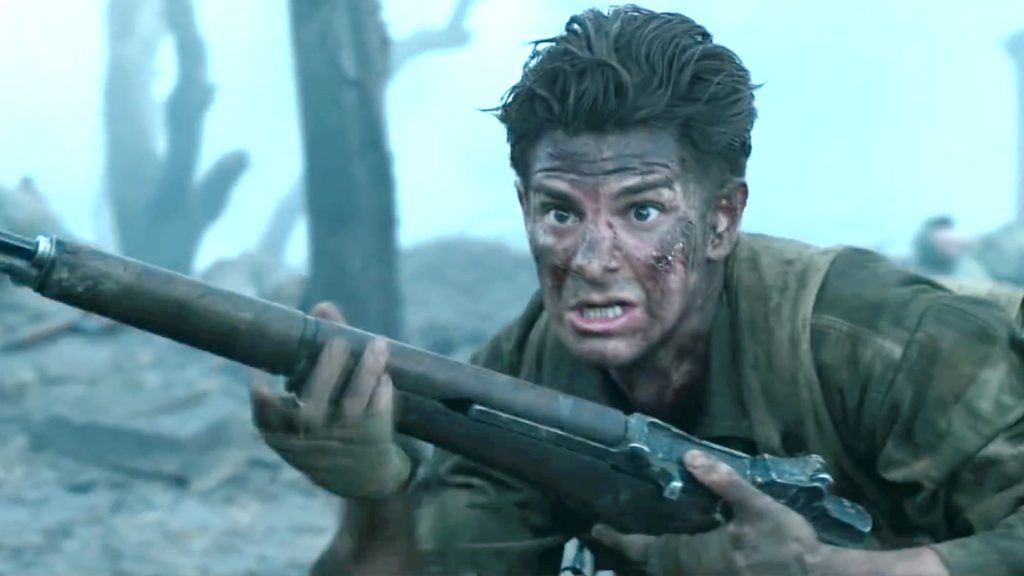 In a nutshell: HELL on earth. Imagine death is all around you: bodies blowing up, screaming all around, smoke, gas, darkness and decay. No matter how much gear you have on, no matter how much training you received in your army barracks, absolutely nothing prepares you for the sheer madness of warfare.

Desmond Doss is a CO – a conscientious objector. He signed up for the army, but to help people as a medic. Ironic, because in the minds of his superior officers, warfare means protecting your rights and your freedoms at any cost, even if it means taking up arms and killing the enemy. Due to Desmond’s upbringing – a father (and former army veteran) who was often drunk and physically abusive – Desmond believes in the Ten Commandments so earnestly, that he cannot and will not take another human being’s life. I suppose everyone has scars to bear, some are more painful th 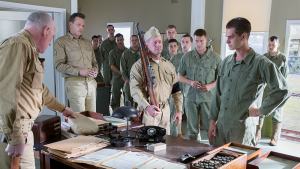 an others and some influence your life profoundly. Desmond chose not to touch a gun because of what he had to endure as a child and teenager.

Unfortunately, during training, this doesn’t sit well and brings an awful lot of hardship and trials to be endured. You get very frustrated at seeing the humiliation that Doss had to endure, all because his superior officers wanted a CO out of their bunker. A court martial, potential jail time and the disgrace of being discharged loom until Doss’ own father steps in to formally intervene during the court proceedings. Doss is able to enlist as a medic, thus being able to save lives. Doss is able to get married but before you know it, he’s off to Okinawa with his regiment.

Doss watches in horror as so many of his men are cut down. He does his best to provide help and to give medical attention, under the circumstances. I cannot begin to imagine what it must be like, making those life and death decisions on the field of battle. You can’t really think straight, you’re short on proper medical supplies and everything around you is dark. Yet, Doss continues to go out and take care of the wounded, while keeping watch with a fellow army member named Smitty. When you watch Desmond on screen, especially during the battle sequences, you feel as though it’s only a few feet away – and that gives the viewer a feeling of desperation and sheer terror. The landscape is littered with dead bodies; ash and soot; grenades blowing up and smoke drifting all over. The carnage in the movie is gruesome and realistic – although I will never know what it’s like to have to fight in a World War (and I will always be truly appreciative of the brave men and women who sacrificed their lives, so I could live free), there are moments in the darkness where Desmond reflects on the days’ events. He is a man who wants to help and in times of war, compassion never goes out of style.

Andrew Garfield does a phenomenal job at his portrayal of Desmond Doss – the pained look on his face; the sheer terror at seeing his comrades fall in battle; the weight of war on his shoulders 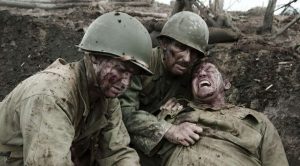 and how he has to carry on. In a surprising turn of events, Vince Vaughan is Desmond’s superior officer, Sergeant Howell – and for a guy who’s known to star in one comedy after another, (True Detective being a notable exception) Vaughan plays a real hard ass. He continually barks out orders, drilling his recruits and painting an extremely dire portrait of war in order to prepare them. And in times of war, you don’t paint a pretty picture of sunshine and rainbows – its guts, death and fear. Sam Worthington portrays Captain Glover, another battle hardened army man. Both men didn’t like or believe in Desmond’s pacifist ways and tried their damnedest to get Desmond ejected out of the army. Once they’re on the grounds of Hacksaw Ridge, both men see just how brave and practical Desmond really is and completely change their attitude towards him.

Certain camera angles give you the feel of how challenging it was to actually storm Hacksaw Ridge – the Japanese soldiers used the rugged landscape and jagged cliffs to their advantage. While watching the American soldiers running towards the Japanese bunkers, you get a knot in your stomach – it’s literally open season on the Americans, as they had nowhere to run and nowhere to hide while storming the enemy lines. It was a continual slaughter and you can’t help but feel despair, watching all the men die.

The battle on Hacksaw Ridge carries on – more death, more destruction and more chaos. Doss and his regiment suffer horrendous losses and amidst the smoke and gunfire, soldiers are starting to lose hope. Doss rescues as many as he can, but what a crapshoot. Trying to save lives while making sure you don’t get killed is truly noble, but scary. The Americans suffer terrible losses and the devastation is plain to see. Doss is shell shocked and begins to doubt his faith in God, what his purpose is and what he should do next. Instead of exiting the ridge with the rest of the regiment, he goes back in an attempt to save those who are still alive but wounded. And man, Doss does it – he selflessly saves a lot of his men. I would be shaking to the core, despite training. Why would one man risk his life to continually go back and save other wounded soldiers, even though it looked like a suicide mission?

As Doss continues to send men over the Ridge, he finally comes down and is recognized for his incredible bravery. The war is not over, and the troops have to go back up the Ridge one final time. What ensues is another round of death, the Japanese ‘appear’ to surrender but we all know that’s a trick – especially in war, all kinds of tricks are deployed. The troops continue to fight and are successful. As several of the high ranking Japanese men commit suicide, Doss puts himself in the line of fire and kicks two grenades away from fellow soldiers, but sustains terrible injury. He is sent home and awarded the Medal of Honor. I cried so many tears, thinking about one man’s incredible will to put others’ safety and well-being before himself. I call that heroism and courage under fire. 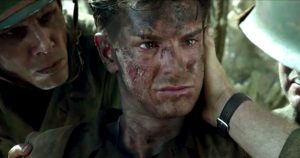 The ending sequence of the movie shows real footage of Desmond Doss, his wife Dorothy and some of the commanding officers he served with. They spoke highly of Doss, and with good reason. They owed their lives to this gentle, quiet man. And the humility shown by Doss throughout his entire life speaks to his good character. If you enjoy movies with a military theme, Hacksaw Ridge will not disappoint.

Learn that for yourself when Hacksaw Ridge debuts on HBO Saturday, July 22 at 8:00pm.