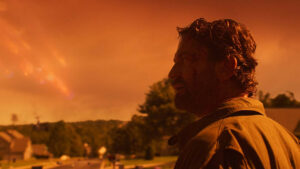 You’d be forgiven for assuming that a Gerard Butler vehicle about a humanity-threatening comet would naturally lean more towards Armageddon than Deep Impact, but it’s quite the contrary. Though covering well-marked and well-publicized territory, Ric Roman Waugh’s Greenland actually comes out the other end of the Hollywood machine feeling surprisingly fresh. In what can be regarded as a B-blockbuster masterstroke, writer Chris Sparling (2010’s Buried) threads spectacle setpieces sparingly, instead focusing on mass panic and family separation as the film’s core threats as opposed to the impending Extinction Level Event itself. In doing so, the nods to Deep Impact are there, but what Waugh manages to compose is ultimately something of more close proximity hyperrealism. In fact, many of Greenland’s peak moments of heightened tension take place not as fire rains down from the sky, but in the confines of gridlocked off-ramp traffic, or airfield holding facilities. If the central character’s plight is reduced to a case of needing to get from A to B to survive, there are all sorts of exploitable peril in being forced stationary, or indeed, forced backward. 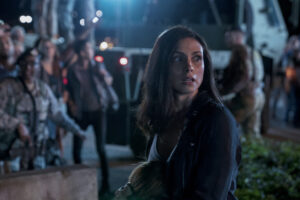 Better yet, Gerard Butler is actually allowed to be Scottish in this movie, which makes an insane amount of discernible difference – again, attributable to the pre-pen consideration of Sparling’s taut writing and the need-to-not-be-Deep Impact direction of Waugh. Audiences have seen Butler as Mike Banning on three (soon to be four) times already. There has been a lifetime’s worth of Butler’s American accent, and that’s fine. But, in a film that is already going well out of its way to achieving its own identity against a tried and tested backdrop, Butler’s native twang is a gamechanger in terms of how you feel towards him. It may seem like a small thing, but in its inclusion, it adds a subtle layer to the character in that all the adversity that he faces is on foreign soil. That he is that much further from the safety of home adds a considerable dynamic.

In a supporting sense, Morena Baccarin exceeds well past her previous incarnations as someone’s girlfriend or wife. She still is that, but in Greenland is given plenty of room to breathe and to succeed as a parent in her own right, as opposed to the screenplay leaving it to Butler’s character to do all the heavy lifting. Rather than simply being along for the ride, she is a dramatic driving force, especially in scenarios where she and Butler are separated.

But the lingering question is, is it even a proper disaster flick if it doesn’t feature a lauded character actor as the grandpa who is initially fuelled by their desire to survive only to quickly and forcibly be resigned to accepting their fate? The answer is no. Step forward, Scott Glenn, whose brief appearance lends itself well as a visual metaphor for the forgotten billions who stand to perish while the core few live on. If that reads as sarcastic, it really needn’t. All too often with these sorts of movies, the audience is invited to revel in the spectacle of destruction. Though Greenland features spectacle setpieces in droves – though not to the degree of classic Roland Emmerich fodder – it is never at the expense of the film’s humanity, which is perhaps its greatest strength and most pleasant surprise.

Greenland is now available to stream on  HBO & HBO Max.