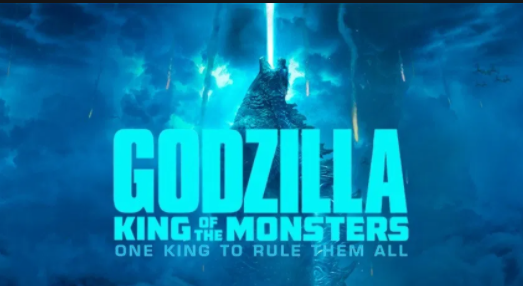 There are some movies that are sold totally on the character alone though most movies are sold on the plot. Some are sold on the poster design. And some, like Godzilla King of the Monsters, are sold on all three. For some reason there’s this commonly held belief that spectacle and bombast are antithetical to something having a deeper meaning or intent, like the most serious dramatic story can only be two people debating about the meaning of life. Well some people don’t have all day to wait for Godot, and sometimes when it feels like the world is crashing down around you it helps to actually SEE the world coming down around you. Especially when it’s becoming distressingly more frequent that the world is literally coming apart at the seams. 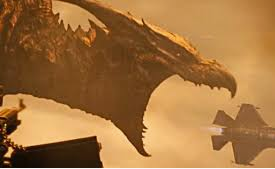 To wit, here we have a new Godzilla movie, a sequel to the 2014 reboot, about other giant monsters being unleashed across the world that Godzilla’s going to eventually tear apart. A city or two will, unfortunately, get in the way of all this fighting. And all we can do as humans is bear witness to the destruction and hope to pick up the pieces afterward. In the middle of it all, we have Madison (Millie Bobby Brown) and her separated mother, Emma (Vera Farmiga), and father, Mark (Kyle Chandler). In the aftermath of Godzilla’s previous battle, they lost their son, Madison’s brother. Emma now researches the “Titans” trying to find a deeper understanding of what they are and where they come from, while Mark simply festers a deep-seated grudge. When people can’t find a way to cope in a healthy way, they suck the people around them into their vortex of grief. And all some people can do is bear witness and hope to pick up the pieces afterward.

You see where I’m going with this, right? Godzilla has had some pretty silly outings in his 65 years of toppling towers… …but his story has been rooted in allegory from his inception. And there’s certainly nothing in the spectacle and bombast here that needs to be justified beyond being just that. The visuals here are tip-top. Every wide shot gives you a sense of scale, direction, and transition letting you know where everything is and where it’s going. It doesn’t shake or flip around in a way that’s likely to give you a headache or a seizure.

Even without spoken words, each monster’s identity and character is easily read and understood in their framing and their action. King Ghidorah stands out especially for having 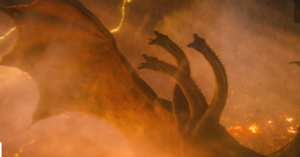 three heads with three distinct personalities. They never feel like balloons crashing against each other in the open air, there’s always weight behind their steps. Giant creatures in these kinds of movies haven’t felt this fully realized since Pacific Rim.

Is it for everyone? You know from the poster whether or not something like this is in your wheelhouse. Despite playing with deeper themes, the movie can’t ignore that it’s selling point is monster fights first, human drama second. And there’s something to be desired in how the villain’s overarching goal is laid out as an attempt to avert climate disaster whereas the hero’s only driving force is to stop them. There’s no sense that anyone is trying to fix the system in a constructive way. There are some mixed messages, to say the least.

Still, for all the ways this movie succeeds, it’s worth a full recommendation.

Catch Godzilla: King of the Monsters when it premieres on HBO this Saturday, January 18th at 8pm. You’ll be in awe of the King!