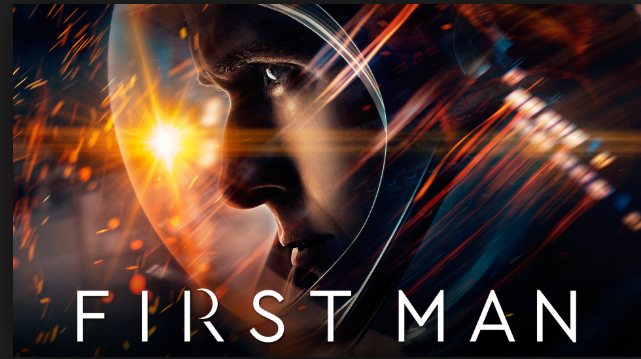 James R. Hansen, an Auburn Professor of History, wrote the only authorized biography on Neil Armstrong. This serves as the source material for Damien Chazelle’s First Man, a film that extracted the appropriate amount of content from the 784-page book, to tell the story of a man who had to travel approximately 239,000 miles to make peace with himself. The voyage of Apollo 11 serves as the backdrop to this very individual story. Although this is a work based off of actual events, I must still say mild spoilers are ahead, for the film in its entirety is covered.

The opening scene places the audience in the cockpit of the hypersonic X-15, piloted by former Naval aviator Neil Armstrong (Ryan Gosling). Neil breaks the Karman’ line (the boundary between the last layer of the Earth’s atmosphere and outer space) and is meant to descend at a controlled rate back towards terra firma. However, the X-15 violently bounces off the thin atmosphere, preventing the pilot from making his descent. We feel the intensity of the situation through superb production. I haven’t experienced a documentary or film that has made flight so terrifying. The realism and lack of CGI keeps the audience enthralled. Neil Armstrong, while in constant contact with ground control through static-filled radio communications, is finally able to land; albeit a hard landing in the Mojave Desert.

Normally after such a dramatic opening, films tend to introduce the audience to the loving family and friends of the main protagonist. We are indeed introduced to a lovely family, but one soon to be in mourning.  Neil and Janet Armstrong’s two-year-old daughter, Karen, soon dies of a brain tumor. Neil had kept a highly detailed journal of Karen’s conditions, in the hope of finding a neurosurgeon to operate on the tumor. But his understandable and passionate efforts are futile, and Karen dies. Neil does not show much emotion in front of his son and wife, but we see his pain when he locks himself in his study after the funeral and cries uncontrollably.

Fast forward a few years later, and the United States is trailing the Soviet Union in the space race. Both countries have catastrophic failures during their fierce competition for air and space dominance. But as we know, it is the Soviets that send the first human to the final frontier.  America desperately continues to press forward with the Gemini program, the precursor to the Apollo program. Armstrong is making a comfortable living as test pilot turned full NASA astronaut. But he remains distant from Janet, even though the couple has had a second son. Neil has yet to share his true emotions of losing his daughter with anyone, and it is detrimental to his well-being and marriage. Damien Chazelle handles these personal scenes with extreme delicacy, opting to shoot intimate scenes handheld in 16mm, giving a documentary feel.

In 1967 and 1968, two events happen that nearly cancel the Apollo program.  In 1967, Apollo 1 loses its test crew in an exercise that leaves three dead, one being Ed White, a close friend to Neil Armstrong. When a fellow astronaut attempts to console Neil, who is in his backyard reflecting on all of his built-up emotion, Neil coldly responds “What makes you think that I not wanted to be alone”.  First Man is not attempting to give us the likable everyman that is normally present in biographies and works of fiction.  We are given a human being who needs to find how to cope with loss.

Despite its marvelous production (again the best I have seen related to the space race), First Man lacks the emotional drive and relatable characters of Apollo 13 and the sense of adventure that The Right Stuff and HBO’s From Earth to the Moon vibrantly exuded. The movie at times feels too cold, despite the tone clearly is coming from a well-structured story centered on loss.  But the final 20-minutes of the film changes the temperament with the moon landing.  It is not the magnificent desolation of the lunar surface; captured with astonishing practical effects, that changes the movie to being uplifting vice depressing.  Nor is it the photorealism of the launch of Apollo 11 from Cape Canaveral to the giant gray rock.   After the nerve-racking touchdown on the Moon’s surface, we finally get a sense of catharsis.  But before I reveal this scene of absolute liberation, I must mention the controversy over the American Flag. Some people decided to boycott this film, due to Chazelle making a decision not to show the flag being planted into the lunar soil.  I fully understand that the achievements of the Apollo program was an American achievement; a culmination of engineering, creativity, and bravery.   However, this film was meant to be a personal journey.  Nonetheless, the American flag is prominent on the moon, captured gloriously in 70mm IMAX celluloid.  Old Glory stands out well against the backdrop of the dusty surface.

Before departure, Neil is quite a distance from partner Edwin “Buzz” Aldrin, the second man on the moon.  Neil standing before a deep crater within the seas of tranquility, the landing zone of Apollo 11.  Neil had made it this far because he chose to be the first man on due to his overcoming of near-deadly flight operations.  But Neil has not overcome his ability to stop holding his emotions in, until now.  Holding a bracelet of Karen’s (this was shown earlier in the film before her death), Neil tearfully throws the keepsake of his only daughter into a void that was created from asteroids hurtling at thousands of miles per hour into the Earth’s satellite.  Even James R. Hansen is unsure if this ever occurred, however, Neil Armstrong told Hansen that he left “something” on the moon.  This is a moment when creative freedom is appropriately used in a film that is based on actual events. *In recent articles from reputable news outlets, it had been officially revealed by NASA that Neil Armstrong carried pieces of the Wright Brother’s Kitty Hawk to the surface of the moon*.

First Man has revived my interest in HBO’s From the Earth to the Moon, a superb miniseries that is received a high definition remastering on July 16th on Blu Ray and HBO streaming platforms. First Man premieres four days later on the 50th anniversary of the actual moon landing, on July 20th,  at 8 pm on HBO.