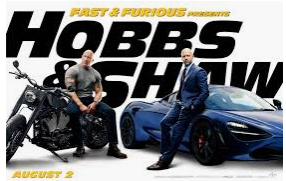 It’s unfortunate that this review comes right on the heels of the next entry in the Fast and Furious main series getting delayed until next year. Still, I hope that Hobbs & Shaw can tide over your supreme disappointment until next April…

The Fast and Furious series has been likened to superhero movies, in that it’s a franchise that’s managed to piggyback off of a surprise success with an extreme escalation in energy and a loosened relationship to the laws of physics. The first movie, which now came out almost twenty years ago, was about street racing in Los Angeles. The most recent

installment involved an unstoppable computer hacker taking control of hundreds of cars in a parking garage and launching them out of the building into the street like a tidal wave.

The success of that pivot now brings us this spin-off pairing Dwayne Johnson’s rugged and dirty Agent Hobbs with Jason Statham’s suave, international assassin Deckard Shaw in order to stop Brixton Lore, Idris Elba’s self-identified “bad guy.” Themes of family that purvey the main series aren’t left behind here as Shaw’s sister Hattie, played by Vanessa Kirby, is the lynch-pin of their manhunt. Infected with a programmable virus that Brixton wants to steal, they need to hunt him down in time to save her while he’s hunting them to get the virus. Also note, Brixton Lore is a cyborg.

This is the classic good-cop bad-cop pairing, where the title characters bicker like an old, married couple, getting increasingly irritated by the other’s presence but seemingly never 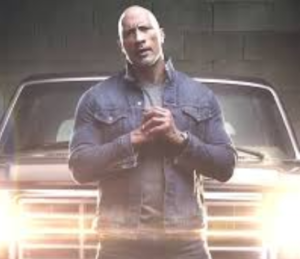 enough to convince them to actually split apart. Except in this case their pissing contests take place during big set pieces on the side of a building, in rooms full of bad guys to beat up, and in very expensive cars being driven in less than ideal conditions to maintain their structural integrity. Honestly, despite the bonkers premise that’s been laid out here, the movie isn’t great. It’s fun in so far as it’s a goofy romp around the world, but it’s a popcorn movie like the actual popcorn. A nice treat that isn’t actually that filling. Insubstantial is probably too harsh a word to describe it. Fleeting, would be more accurate. The moments that you want to last longer don’t stick around. The connective tissue scenes that justify each set piece last a little too long. We know where the movie is going, it doesn’t need so much complicated set up to get there. The movies may have a loose relationship with physics but at this point, they have an even looser relationship with their own continuity (This is not a bad thing #JusticeForHan).

The flip side of a series getting too cartoonish is that it becomes difficult to take things seriously. If Hobbs can pull a helicopter out of the sky with his bare hands, where’s the tension in a car chase where it seems like he could just stand in the road like a pylon and let the other guy wrap their engine around him? Like most movies starring The Rock (and Jason Statham for that matter), this movie lives and dies on the charisma of its stars. They’re having a good time so that means we can have a good time. And in these times, that’s not a bad place to be in.

Catch Fast and Furious Presents: Hobbs & Shaw on HBO this Saturday, March 14th at 8pm! Check out the trailer below!