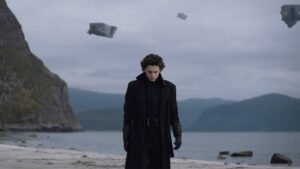 So much for Dune being ‘unfilmable’. What’s more, for Denis Villeneuve to succeed on such a scale where cinematic legends such as Alejandro Jodorowsky and David Lynch have so notoriously failed only further evidences the force with which this incarnation sticks the landing. Comparisons to The Fellowship of the Ring and Star Wars, believe it or not, should not be misconstrued as hyperbole.

The reasons for it’s immediately resonant success and instant classicism are multiple fold and will evolve to be studied for decades to come – to revere it as a modern masterpiece of narrative and craft is, again, not remotely overreaching – however, aiming to avoid the ruin of spoils is to centre on core clouts. 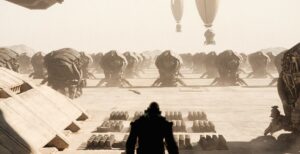 Dune is a film that feels physically present in every single shot Greig Fraser has crafted, especially if consumed at IMAX ratio which, if the option is available, should absolutely be the pursued format in which a first viewing is consumed (sorry, HBO Max). The digital effects work blends seamlessly with the practical environments to overwhelming immersive effect, and, concurrently, Hans Zimmer’s earth-shattering score has less of the oppressive (in a positive way) sensibilities of something like The Dark Knight Rises, and instead is more woven, intricately, into the framework of the sound design in a way far more akin to his work on Dunkirk. The visual and aural achievements are completely in tune with one another, and are regularly capable of jaw-dropping scope and impossible intimacy in equal measure – a well maintained value that the film possesses throughout its two-and-a-half hour runtime in almost unprecedented fashion. Further top marks to Villeneuve, then, in that if one is indeed able to draw any direct comparison along these lines, it will more than likely only be to other Villeneuve works – the evolution of Arrival’s best qualities coupled with the world building grandeur of Blade Runner 2049. 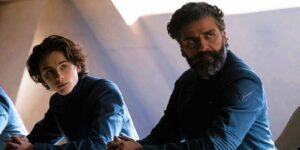 While the craft at this stage, with this team, was almost entirely a given, what was always going to be a more ruthless challenge was the deliverance of Herbert’s opus to be simultaneously accessible to newcomers and pull-no-punchingly true to the source material. And yet, it toes the line in a way that is so cohesive, so enjoyable and so digestible for the viewer, that the more you think about it, the more incomprehensible the undertaken narrative task becomes. The assumption has to be made then, as with something like Nolan’s Inception, that Dune was adapted for the screen by Villeneuve, Jon Spaights and Eric Roth in a way that, from day one, was written in the hard, fast notion that the audience can and must be trusted. Through decades-old strength of established character and a self-defined delivery of mythology and technology that gleefully extends far beyond the borders of this film, the world of Dune exists. Every facet of it’s design is believable, as opposed to inviting you to suspend belief. Because it is so well conceived and so well delivered, even first timers to this universe will have no issue climbing aboard.

Strength in design and character, though, is nothing without performances to back it up. As an ensemble, it is certainly not to be sniffed at. Javier Bardem’s brief introduction, to use one example, is injected with such a perfect nerdist humour that, if there is to be one forced criticism, the film could perhaps have benefited from a further peppering of. Individually, however, Timothee Chalamet and Rebecca Ferguson are exemplary, forging a necessarily strained partnership rooted beautifully in a balancing act of biology and affection. Ferguson’s portrayal of Lady Jessica’s descent into increased vulnerability is powerfully executed from scene to scene, while Chalamet’s maturation of Paul is a straight up exercise in subtlety that should understandably be involved in awards chatter. 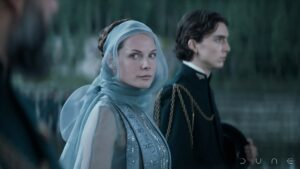 It’s an utterly commanding piece of filmmaking across the board, which should come as a surprise to noone. Still, with hype levels so high for so long, it would have been all too easy to be ensnared by them – especially by such a far-reaching, generation-spanning fanbase the world over. Instead, Villeneuve delivers as you always knew he would, and in a manner suggesting that for all of his successes prior to and now including Dune: Part One, this is a master director who is bafflingly and tantalisingly still yet to amass the peak of his powers.

Dune is streaming now on HBO Max, and is also available in IMAX and all large format movie theaters.