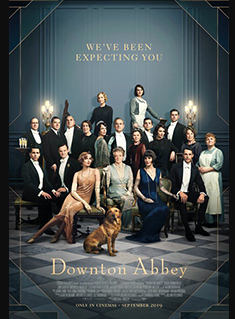 When Downton Abbey premiered in the US in 2011 (it premiered in the U.K. in 2010), it was planned as a self-contained, one-year miniseries. It was inspired by writer Julian Fellow’s Academy Award-winning screenplay for Gosford Park, and was originally planned as a spinoff/prequel to that film. Eventually, it was decided that Downton Abbey would be completely separate, and it premiered to great critical acclaim, as well as record viewership on both sides of the Atlantic.

For the uninitiated, Downton Abbey tells the story of the aristocratic Crawley family, as well as their servants. They all live in the eponymous estate, which houses folks from a variety of backgrounds, from the most impoverished servants to the elite peerage. The series began with the sinking of the Titanic, which brought about turmoil as the family struggled to ensure the estate would pass on to the next male heir. As the series progressed, it explored the themes of class and privilege, as well as the notion that inherited titles and grand estates would soon become a thing of the past. It was, the show noted, the end of an era. England no longer lived by the social customs of the past, but it was not quite ready to abandon them altogether. Women were seeking more independence. The poor were seeking upward mobility. Things were changing and progressing, and the inhabitants of the Abbey needed to adapt or fall behind.

When the tv series ended in 2015, rumors began to fly that a film adaptation would follow. The Downton Abbey film finally premiered in 2019, bringing back all of the original cast. Set almost two years after the conclusion of the series, the film focuses on how Downton’s family and staff prepare for the arrival of King George and Queen Mary, who have announced a brief visit to the Abbey. The news is met with generally positive reactions, though some servants question and debate the relevance of the monarchy and peerage in the modern world. Meanwhile, the family wonders whether it can expand its wealth by inheriting an estate from a distant relative.

Downton Abbey always excelled in its most quiet moments and struggled in its loudest. For example, a servant’s inability to serve food properly was a compelling disaster that could spell an end to a career for someone who desperately needed that job. On the flip side, subplots involving murder seemed out of place in the quiet little village, and less relatable. The movie suffers from the same problem. It shines when a servant speaks out of turn, but stumbles when a murder plot is uncovered (what is it with all the murder in Downton?).

The other problem that is faced by any film adaptation of a popular TV show is that there are heightened expectations. People are being asked to go out and pay extra to catch up with characters that they used to see in the comfort of their homes. Is the film worth it? Does it bring anything new to the table? Is the technique up to film standards? Will it be understood/enjoyed by those that did NOT view the series?

The answers to these questions are complicated. The Downton Abbey film does attempt to present a self-contained narrative (the royal visit), and it could be understood by newbies. That being said, I’m not sure the narrative would resonate without knowing these characters from the tv series. Why should it matter to a new viewer if Carson returns to the Abbey? What is a new viewer to make to Thomas’ subplot? If the film has set out to please only its existing fanbase, then it must rise to the challenge of existing for a reason beyond nostalgia. Does the film’s story bring its characters to new realizations? Does it change their circumstances? Does it grow them in any way? Again, the answer here is that it doesn’t. The characters (for the most part) are the same in the beginning and the end of the movie. The royal visit does not bring about any life-changing moments for them, nor any new understanding or growth. They remain who they were at the end of the tv series, and continue to ask the same questions they asked in the series. 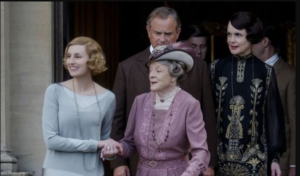 What is particularly frustrating about the questions asked in Downton is that they are not always asked seriously. When a servant or a peer asks about the future of estates, about the changing nature of British society, the series and the film re-affirm the value, utility, and worth of the old ways, despite all the evidence showing that the old ways aren’t good enough. Sure, the series acknowledged the usefulness of some new things, like the telephone, but overall, it was a grand celebration of the then status-quo. As The Atlantic pointed out, the series was “romanticizing the considerable gaps between rich and poor,” Why alter things for society at large, it asked, if a beneficent Lord like Lord Grantham is always willing and able to help the poor in their time of need? That being said, the show did begin to make some strides in addressing the Crawleys’ clash with modernity in its final seasons. Why, then, does the film only seem to regress to a celebration of inequality? The answer, of course, is that the glamour of the aristocracy is what drew viewers into the story in the first place. Fans don’t want a show about progress, but about a grand estate, filled with balls and gowns. The mistake made by the film’s creators is that societal progress and character progress are not the same thing, and it would have been great to see the latter, at least.

That leaves us with the final criterion: is the film enjoyable? Here, the answer is a definitive yes. The actors still shine in their roles, with the added benefit of having inhabited the characters for years. The writing is still distinct for each character, bringing a wide variety of personalities to the estate (and the film). The movie feels like a visit with old friends, and that is a comforting and warm feeling, even if it’s not innovative or groundbreaking. The family and staff at Downton exist in a place that we can only access onscreen, a bygone era that perhaps never really existed, where people are honorable and their intentions are kind. In difficult times, comfort is no small thing, and people take joy where they can find it. It is that which Downton Abbey offers: enjoyment. If you enjoyed the series, you will want to catch up with these characters you loved. If you didn’t, then this wouldn’t be the film for you.

Downton Abbey premieres on HBO and HBO platforms on May 9th.