Boasting a slightly less potent cast than it’s 2017 predecessor, Kenneth Branagh’s iteration of the obsessive PI Hercule Poirot returns in charming form with the aforementioned’s latest go-around on an Agatha Christie classic. Thankfully, to remake is to reimagine in the case of this sequel, with many a new character (and even a couple of mashups) in contrast to the book, and previous filmic versions. This creative choice (coupled with an opening quick dive into Poirot’s past which on the surface is seemingly the origin story of a mustache, but just about pays off later as something more) means that Death On The Nile achieves immediate and commendable successes in that there is a freshness to the adaptation where it could so easily have been just another tired, bloated remake. In places, it’s admittedly the latter, with the basic crime committed over halfway through its two hours-plus running time, but once it gets going, Branagh is totally in his element both behind the camera and in front of it. And, if one is being honest, it could be argued that the first hour, which at the moment is all too easy to conceive as nothing more than well dressed, star-powered fluff, does actually feature enough character development across a broad board to well inform Poirot’s acute intuitiveness once he gets down to interrogating. 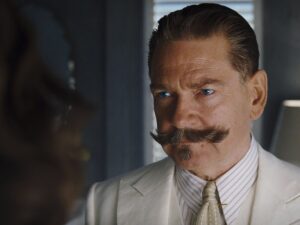 If there is one crucial tip to bestow on anyone considering popping this picture on in the next few weeks now that it is available on HBO Max, it would be to actively avoid knowing exactly who it is that actually gets murdered in the first instance. That added mystery contributes to the overall enjoyment of the whole ride, especially if you’re already not a fan of the said talent going in. And, speaking of talent, Branagh contributes in droves, if not to Cruz/Depp/Defoe-esque levels. Instead, Gal Gadot (of all the actors in the world) leads the line with Armie Hammer in tow who, presumably, found enough time in his schedule between hooning rails of dandruff to make his final contribution to Hollywood studio pictures. Tom Bateman returns as Bouc who, while his introduction is truly annoying, soon settles in and is a credit to the cast as Poirot’s Watson. Then, in the weirdest casting imaginable, you have Annette Bening doing English, and Jennifer Saunders doing American. When they are chewing scenery together, it is positively mind-warping, especially with Saunders’ long-time partner in crime, Dawn French, standing by as her normal, perfect self. Russell Brand deserves all the credit in the world for delivering a genuinely subtle, interesting and crucial doctor with motive (you need them on board for all the murdering), while Letitia Wright overacts to the N’th degree as the niece to Sophie Okonedo’s already impervious Salome – a blues vocalist who manages to melt the heart of the man himself. It is Branagh though, and his unbridled skill set, that ties this all together. He is hilarious and heartfelt, piercing and proper, and in his typically complete performance does give its soul. 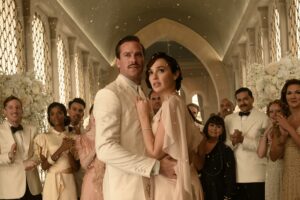 Additionally, this movie cost something like $150m, so all of this delicious convolution is against the most extra of backdrops. The boat is pretty cool, even if the CGI of Poirot-at-the-pyramids currently doing the Twitter-rounds is some of the most second-rate green screening ever committed to a film with a budget this high. They must have spent too much of the budget on clothes. Death On The Nile‘s biggest appeal, though, is that it doesn’t not want to be Friday night fodder. It is that, and it knows that, and with a host of familiar faces weaving a familiar yarn, it’s ‘Nile’ on impossible not to get swept along in the current of it all.

Death on The Nile is uploaded now on HBO Max and debuted as the HBO Saturday night movie on April 03.