When our fearless leader and editor-in-chief of HBOWatch.com, asked the writing staff to review a theatrical film being premiered on Home Box Office during April, my decision wasn’t easy.  I could review an intense spin-off of The Conjuring (The Nun), a dystopian science fiction thriller (The Darkest Minds), or the funny and crafty Crazy Rich Asians (Diana will have a blast reviewing that comedy).  Ultimately, I decided to analyze Spike Lee’s latest effort BlacKKKlansman.

The premise of BlacKKKlansman is one for the ages: Ron Stallworth, an African American police officer from Colorado Springs, CO, successfully manages to infiltrate the local Ku Klux Klan branch with the help of a Jewish surrogate who eventually becomes its leader. Based on actual events. The film’s setting is quite unique, for movies set in the pre-Reagan era and centered around racism have been predominantly been set in the southeast U.S or Los Angeles. The beautiful snowcapped Southern Rocky Mountains are a sharp contrast to a town where racial and sociological tensions are rampant.  Upon arrival to his new precinct, Officer Stallworth (brilliantly portrayed by John David Washington) immediately sets out to make a name for himself. After he is reassigned from spying on a local civil rights activist chapter, Stallworth reads a recruitment advertisement for the Ku Klux Klan. In a totally impromptu and hilarious scene, Stallworth calls the number, and wouldn’t you know, the Grand Wizard himself David Duke (portrayed by Topher Grace), answers the phone. Stallworth intrigues Duke with his

funny yet gut-wrenching rants against anyone that is not of pure Aryan blood. However, the overzealous Stallworth makes a major gaffe when he uses his real name.  Stallworth’s colleagues admire his proactive attitude, however, laugh hysterically at his hastiness.

Duke invites “White” Stallworth to begin his initiation process with the local Colorado Springs KKK chapter. Knowing that he has a snowball’s chance in hell of successfully posing as a prospective member, Stallworth recruits the reluctant Officer Zimmerman (portrayed by a never-been-better Adam Driver), to act as his avatar.  Zimmerman is of Jewish descent and abhors the supremacists but is understandably apprehensive about infiltrating the hate organization. And thus, a great movie is born.

Duality and irony are major themes in BlacKKKlansman. Stallworth and Zimmerman are portraying an aspiring KKK member. Stallworth is a black policeman who initially spied on an organization dedicated to gaining civil rights for people of his racial background. Zimmerman is of Jewish ethnicity but must portray a person that denies the Holocaust. The KKK hosts a function that invites the most prejudiced minds in America, yet blacks are the servers during the function.  Spike Lee effectively shows there truly is a fine line between humans coexisting peacefully and violently. 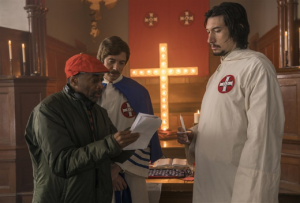 There is a perfect balance of humor and terror, with special emphasis on terror. Nearly every moment of BlacKKKlansman is filled with the dread that Stallworth and Zimmerman’s gig may be up, with an especially intense scene where the latter is suspected of being a Jew and demanded to take a polygraph test.

Get Out director Jordan Peele brought the project to Spike Lee, and the director wrote and crafted a movie that is on par with previous efforts Malcolm X, Do the Right Thing, and Inside Man. Lee and his two fellow screenwriters won the Academy Award for adapted screenplay, and it baffles me that Adam Driver did not win best-supporting actor.

Most casual movie watchers and cinema buffs will appreciate this film. The opening scene is a testament to Lee’s love of cinema.  The opening contains a clip of the heavily wounded and defeated Confederate Army from the timeless Gone with the Wind, followed by a brief but mood setting pseudo-documentary featuring Alec Baldwin as a 1950s white supremacist.  The closing is footage of the 2017 Charlottesville, Virginia race riot that claimed the life of a young civil rights activist woman.

The movie takes the material seriously but adds in the perfect amount of wittiness to not have the viewer leave the experience feeling depressed by the horrific truths of American society. BlacKKKlansman debuts on Saturday, April 20, 2019, on HBO.