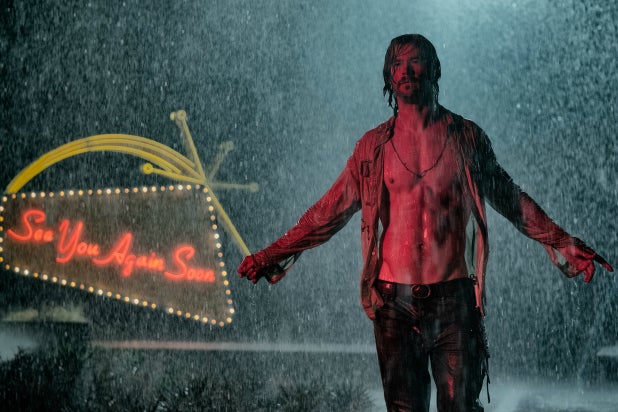 Writer and director Drew Goddard has been making a name for himself since the early days of Buffy the Vampire Slayer and Lost — and lest we forget the infamous Cloverfield­ — but his work wasn’t widely recognized until his directorial debut in 2011, The Cabin in the Woods. Arguably one of the best horror comedies of the past decade, Cabin in the Woods became an instant cult classic for its imaginative genre subversion, clever homages, and insane unpredictability — there simply hadn’t been a film so comedically outlandish and daring in the horror genre in quite a long time, and Drew Goddard was hailed for it. (Also, as a fan of The Good Place, I feel obligated to mention his involvement as a director, which only solidifies his filmography.) While Goddard kept himself busy afterward—he wrote the screenplays for World War Z and the award-winning The Martian — it took a full seven years for him to finally return behind the camera lens, and the wait was more than worth it. The subversion Goddard brought to the horror genre in Cabin in the Woods, homages and brutality and all, he brings to the western and murder mystery genre in Bad Times at the El Royale — and it is one hell of a ride that is not to be missed.

Bad Times at the El Royale is a film best seen one hundred percent blind. Do not watch trailers. Do not read reviews. Now, as you are currently reading this, it may sound like I am discouraging you from reading any further. Rest assured, I care too much for this film to ever give away anything of major plot value or importance, and will, therefore, remain entirely spoiler-free, of course. There is much to adore in Bad Times, and that will be my focus because I would never ruin this film for anyone as it is one of my 2018 favorites that I highly recommend. For those wanting a small synopsis — which is all you’ll really get out of me anyway — here’s a quick rundown of it. We follow seven strangers as they arrive at a mysterious hotel straddling the state lines between California and Nevada, giving each of the seven individuals the freedom to choose a room (and by extension, an actual state) in which to spend the night, divided stylishly with title cards into six acts and an epilogue. Every act of the film explores a character, their motivations, and provides puzzle piece by puzzle piece as the entire tale of insanity and depravity is slowly brought to light. It’s snarky, it’s incredibly funny, and it’s utterly unpredictable — making for an enigmatic and engrossing experience. The entire cast must also be highly praised, as each and every single one of these actors sells these roles with ferocity, particularly Jeff Bridges, Cynthia Erivo, and Jon Hamm—though I’d be lying if I said my favorites weren’t the lovable Lewis Pullman and Dakota Johnson.

Those with a flavor for spaghetti westerns and Tarantino-esque films will be quite privy to Bad Times and its uniquely jarring genre subversion. For others, much like myself who really could care less about westerns, it’s a riveting good time you cannot look away from. This one does everything you don’t expect it to and it is executed with such care, precision, and enthralling lunacy. Goddard has proven he knows what he’s doing, and if he’s going to keep deconstructing every single film genre in the industry during his run, I’m all here for it. Do not miss out on this one and do not try to “figure it out” as it plays out — just strap in and enjoy the ride.

Bad Times at the El Royale premieres on HBO on Saturday, June 1st at 8 pm ET and is now available on HBO Now/GO. If you can’t stay away from trailers then I provide one below.  Seek out his movie and enjoy all the twists & turns Goddard provides.