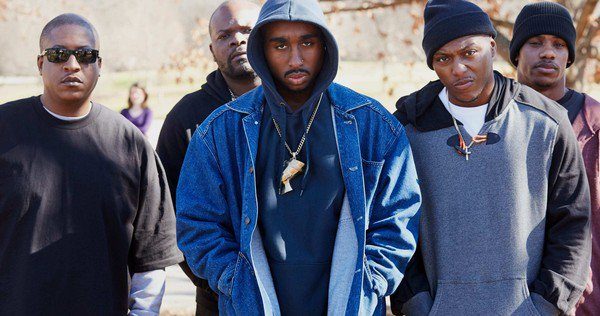 When I was a kid growing up in one of the East Coast’s inner cities, the music that spoke to me and to my classmates was rap. The genre had finally made its way to MTV, and we all tuned in to watch music videos featuring famous rappers wearing gold chains and surrounded by half-naked women. For some, the attachment to rap may have been aspirational, a way of imagining the possibility of attaining that lifestyle. For others, myself included, it was about the lyrics, and the truths they conveyed about the cities in which we lived. It was validating to watch kids like us become famous and speak truth to power. Each kid had his or her favorite artists, as kids do, and we followed their feuds with interest. My loyalty was to Death Row Records, so Tupac Shakur was, for me it for many, one of the greats.

All Eyez on Me, Shakur’s biopic, was released in 2017 after years in development. Writers and directors like Antoine Fuqua and John Singleton were attached to it at different points, but left due to creative differences. Given their impressive bodies of work, I would have been very interested to see their takes on this story. Ultimately, the film was directed by Benny Boom. It was 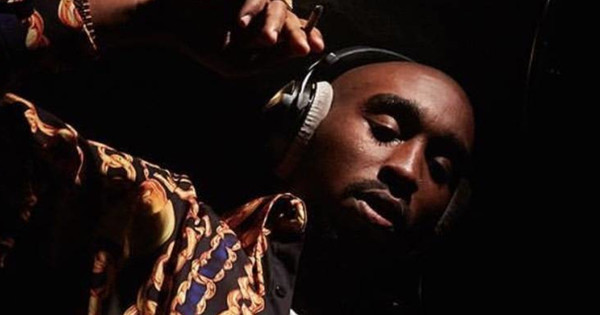 released into a film landscape that has just witnessed the critical success of Straight Outta Compton, which features several of the same personalities. It is almost impossible to view All Eyez on Me without comparing it to F. Gary Gray’s film, and unfortunately, this film suffers as a result.

Tupac Shakur’s upbringing was a large part of his legend. Thus the film begins when the future rapper was in utero, when his activist mother was pregnant and in prison, fiercely protesting the systemic oppression of her people. Tupac’s early years were rife with uncertainty, as law enforcement kept a close eye on his family. He also had to deal with violence in his neighborhood, and his mother’s spiraling drug habit. Nevertheless, he discovered a gift with words at a very young age, a gift that would propel him into stardom.

Actor Demetrius Shipp Jr. looks remarkably like Shakur, and he plays particularly well to the lighter parts of Tupac’s personality. It is easy to forget that Tupac lived only 25 years, and Shipp conveys his boyishness well. Unfortunately, he struggles with the heavier scenes; he doesn’t bring gravitas to Tupac’s very chaotic life. Other actors also struggle to find their places in the fast-moving plot. Kat Graham, for example, is supposed to be consequential as Jada Pinkett, but she seems to enter and leave the film rather haphazardly, not truly connecting with Tupac, nor adding anything beyond letting us know that Tupac knew a young woman who would become famous. This isn’t Graham’s fault; her character isn’t allowed to truly dwell in this story long enough to matter. The same is true for Jamie Hector as Mutulu Shakur and several others.

Nevertheless, there are some performances that rise above the writing and plotting. Danai Gurira stands out as Afeni Shakur, Tupac’s fierce, yet complicated mother. Annie Ilonzeh also brings some much needed emotional grounding to the film as Kidada Jones, Tupac’s fiancée. Dominic Santana is effectively menacing as record mogul Suge Knight. 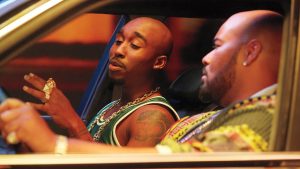 Overall, the actors’ efforts are undone by choppy writing and plotting. Moments of great import are not allowed to breathe; they’re simply checked off in passing. Motivations are underwritten. Much like Straight Out of Compton, the violence against women is grossly underplayed or glossed over. Unlike that earlier film, All Eyez on Me has trouble connecting the imagery of police brutality to the music, both in the way it appears in the lyrics and in how these lyrics resonated with audiences. In the end, the viewer is left to wonder: why did Tupac matter to people? How was he different from his contemporaries? I’m not sure All Eyez on Me answers either question.

For those interested in this particular genre and era, I recommend watching All Eyez on Me in conjunction with Straight Outta Compton, the PBS documentary Soundbreaking, and the HBO documentary The Defiant Ones, which focuses more on Tupac’s contemporary Dr. Dre.

All Eyez on Me premieres on HBO and HBO platforms on January 27th at 8:00pm ET.