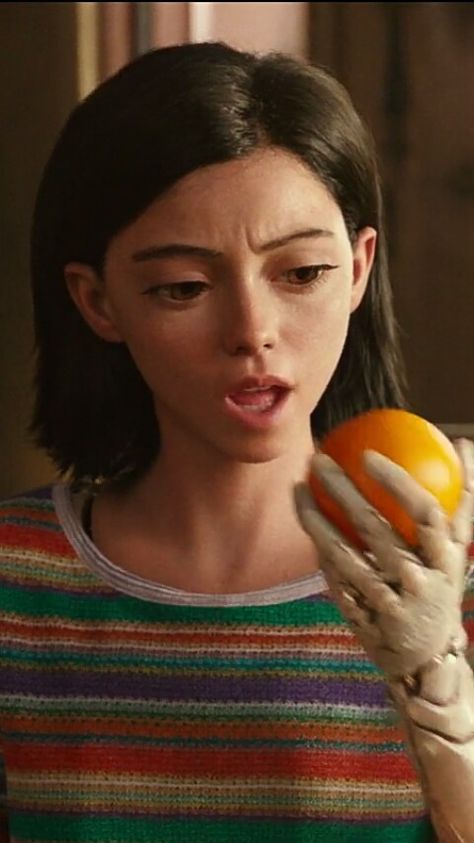 Early on in Alita: Battle Angel (2019, Robert Rodriguez), the titular character, as played gamely through a veil of distorted pixels by Rosa Salazar, is offered an orange. Alita naively bites through the gleaming, golden skin of the fruit instead of peeling it. But the peel proves to be disgusting and unsatisfying.

The skin of an orange is visually inviting, but it’s bitter and not enough to sustain anyone.  Similarly, Alita offers little beyond its initial fancy wrappings except for a sour aftertaste. The film’s producers clearly chose to prioritize character-design over developed characters, set-pieces over storylines, and rampant death over vaguely competent dialogue and pacing.

Alita: Battle Angel doesn’t know what it is or even what it wants to be. Alita herself doesn’t either, at first, but she discovers that seeking out highly violent situations sparks memories of her past and her purpose. The movie tries this same technique with far less success. Each bloody spatter of blue cyborg blood prompts more frustrated questions.

Is Alita just a visual spectacle?  Then why is it so ugly and generic?

Is Alita a Young Adult flick with a strong female character for the preteen crowd? The fact that the Young Adult dystopian genre is increasingly passé after its boom in the past five years says “no.” The film’s high death count says “no” too, as did my thirteen-year-old sister who alternated between flinching and fidgeting over the course of the movie. Indeed, the film is a very hard sell for its PG-13 rating. The last straw comes in the form of a woman who is reduced to a quivering, yet sentient brain and shipped off in a box.

The film depicts female strength as something that is superficially acquired and equally superficially dismantled. Alita’s autonomy waxes and wanes with her robotic bodies, as assembled and destroyed by the men around her. She’s not an inspired or inspiring contribution to the tired genre of dystopic female-led adventure films for teenagers.

If there’s any soul to be found in the film it does not belong to any of the characters but rather to producer James Cameron. His personality was ultimately a strong, distinctive, and downright suffocating presence in the movie.  Alita’s swooping special effects and drooping script are unmistakably reminiscent of Cameron’s Avatar (2009) right down to the oversized eyes of the protagonist and the promises of a dubiously desired sequel. Similarly, there are echoes of Titanic’s ill-fated teenage romance, although this time around, the love-story feels as mass-produced and artificial as the robotic heart of the protagonist.

At one point, Alita lurks in a window watching her love-interest, Hugo (Keean Johnson), sleep. When he wakes up, the enamored preteen forcefully shoves her beating cyborg heart into his hands. After Hugo rejects her display of devotion, she acknowledges “That was intense.” This moment of sheepish self-awareness was refreshing. Unfortunately, such displays of self-awareness are few and far between.

Nevertheless, Alita is not without its charms. Mahershala Ali’s scheming Vector is quietly enthralling. Similarly, Ed Skrein (whom Game of Thrones fans will remember as the first Daario Naharis)’s shady bounty-hunter, Zapan, brightens the screen with a captivatingly buoyant, albeit distractingly decapitated performance. A live-action dog— ultimately gruesomely murdered— is laudable for his admirable performance in a world that was no doubt very empty to him.

Despite its best efforts to spruce things up in editing, Alita is equally empty for us all. The film never dares to let us find anything coherently meaningful beneath the safe outer skin of its own special effects.

Is Alita an empty special-effects spectacular or something more?

Then, feel free to start a conversation about your opinion on this 2019 sci-fi flick in the comments section.

Check out the trailer for Alita: Battle Angel below: