In the early 2000’s Ridley Scott starting laying plans to reboot the Alien franchise by creating three prequel stories that would aim to bring more clarity and depth to the story told in the original Alien films. He kicked this off in 2012 by bringing us the highly disappointing Prometheus which saw a bunch of useless scientists visit a distant planet expecting it to contain the answers to the unanswerable questions; who are we? Where did we come from? And why are we here? While the downfall of Prometheus was largely in its story, cast and Idris Elba’s appalling

American accent, it was an incredibly visually stimulating couple of hours, which made Logan Marshall-Green’s flaccid lines of dialogue almost bearable. So at the end of the movie, we saw Dr. Elizabeth Shaw (Noomi Rapace) whizz off into space in a borrowed spacecraft with Michael Fassbender’s head. The only questions answered was that there is life on this planet that is somehow connected to the existence of life on earth and that these ‘engineers’ as she so fondly refers to them, are not exactly the God-like heroes she thought they would be.

Don’t worry though, Ridley Scott made another prequel; Alien: Covenant which continues this story further (and he has promised one more to really fill the gaps). A group of scientists and their android, Walter (who is the spit of David from Prometheus, are they the same actor or something?) are on a colonization mission to Origae-6, a planet suitable for sustaining human life. However, they pick up a transmission from a nearby planet which is, coincidentally, also habitable. So they do what any self-respecting scientists on a colonization mission with thousands of human embryo’s on board would do, they ditch their plans for Origae-6 and decided

to check out this transmission on this unknown planet instead. Why wouldn’t you? Upon landing and while exploring this planet, which looks very similar to earth, two crew members are infected with some kind of spore which enters into their bloodstream and causes a vile looking creature to burst out from inside of them. While fending off an attack of several of these creatures, David from Prometheus frightens them all away and from under his strange hooded cloak, invites them all to where he has been hiding out with Dr. Elizabeth Shaw for the past eleven years. Of course, it is not going to be a happy ending, and there is more to this invitation than a friendly catch up over some weird flute playing and the crew realizes the huge mistake they have made in coming to the planet in the first place and the horrifying creatures that await them there.

Katherine Waterston plays our heroine, Daniels, and while it would be easy to draw up comparisons between her and Sigourney Weaver’s Ripley from the original Alien trilogy, I think it would be unfair to do so. Waterston makes this character entirely her own, she follows in the footsteps of strong female leads in action 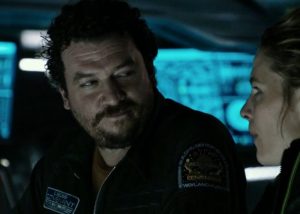 movies that have come before her and carves out a place for herself amongst them. Oddly, her husband in the movie is played by James Franco, who is burned alive in his cryo-sleep chamber before he can even utter a word of dialogue, but the perfect counterpart to Waterston comes in the form of James Franco’s real-life BFF, Danny McBride as Tennessee Faris, the Covenants pilot. Who would have thought that Kenny Powers, Vice Principal Neal Gamby, weed dealer Red would become an action hero in a Ridley Scott Alien prequel? Danny McBride has spoken at length up to the film’s release that he found it just as surreal as it seems, but has been wanting his career to take a slightly more serious turn in recent years with several upcoming projects. The supporting cast, while many of them don’t last long, are inoffensive and work well as food for the neomorphs and xenomorphs that plague this planet. Michael Fassbender reprises his role as android David and simultaneously plays the role of Walter, his equivalent onboard the Covenant. He shares some extremely odd scenes with himself, including one where David teaches Walter how to play the flute and the two engage in a very charged exchange which feels like it will either end up in passionate kissing or a violent beheading.

Upon repeat viewings of this film, I have decided that it is probably not very good, however, it is much better than Prometheus. This film has much more of a horror element to it which detracts from dodgy dialogue and encourages some genuine suspense while the xenomorphs pick off the crew members one by one and some are entirely disemboweled by neomorphs being born within them. I love a bit of gore and if it involves someones back splitting open and a disgusting alien slipping out then I am all in. This definitely gave it the edge over Prometheus and made it much more enjoyable watching, however, the middle third of the film where the crew is exploring David’s bizarre settlement in what appears to be the ruins of an old city, it just drags and drags and drags. There is not enough going on during this time period to keep it interesting and it’s not until the pace picks back up again that you reshuffle in your seat and start to pay attention again. It is satisfying to see that Scott has attempted to fill in the gap between the two films but it still doesn’t do enough in the one film to push the story onward. We are lead to believe that these three prequels are going to lead us up to the beginning of Alien but I can’t help feel its just being overcomplicated. It is impressive that this story and this world exists entirely in Ridley Scott’s head and he is realizing his vision in the late years of his life and 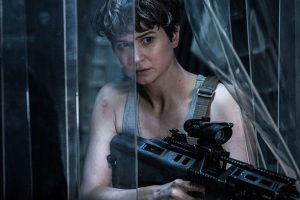 career, however as longtime fans have already postulated, nobody asked for these prequels and nothing will ever come close to the original Alien film that he created. The story has been overcooked what with Alien 3 and Alien Resurrection being something of critical failures and the bizarre crossover franchise of Alien vs Predator movies, it was encouraging to see Ridley Scott back in the driver seat for Prometheus only to be let down astronomically by a script worthy of being nothing more than gas station toilet paper. I appreciate there is an origin to this story that Scott wants to tell, but so far I have been less than impressed with what has been produced. The films are entertaining sure, but when you have something iconic being messed about with, it is going to cause some fury amongst the fandom.

However, the franchise feels far from over as Ridley Scott plans to make the third film in the prequel series, Alien Awakening and there were strong rumors that Neill Blomkamp of District 9 would be making a fifth Alien movie following on from Resurrection. These rumors only came to light when Blomkamp shared some concept art for the movie on his Instagram page, with a caption stating that he ‘was working on this’ but that he ‘isn’t any more’. So despite the Fox/Disney merger, which Scott fears could place Awakening in jeopardy, it would appear that Fox still has a vested interested in the franchise and we could expect to see more stories from this world bursting onto our screens in the future. Personally, I look forward to what Alien Awakening can offer us, I have always found Ridley Scott to be a very hit and miss director, and I am hopeful that just one of these prequels will be a hit for him.

Grab some popcorn and a pillow and tune in for a bizarre, gory and occasionally frightening turn in the Alien story.

Alien: Covenant premieres on HBO on Saturday, March 3 at 8pm.