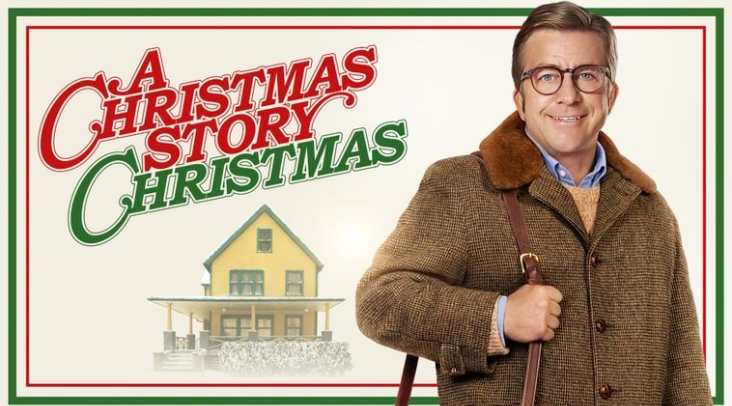 The 1940s gave us MIRACLE ON 34th STREET and IT’S A WONDERFUL LIFE.  The 1950s gave us the most recognized version of A CHRISTMAS CAROL. The 1960s and 1970s gave us a slew of animated and stop-motion classics. The 1980s gave us NATIONAL LAMPOON’S CHRISTMAS VACATION and A CHRISTMAS STORY. The 1990s and later decades have a select few holiday films that are worthy of mentioning but we don’t by now you get the point. However, out of all of these, the 1983 fan favorite A CHRISTMAS STORY has been preserved by the National Film Registry and it has been shown in a marathon annually on TNT since 1997 and on TBS since 2004 titled “24 Hours of A Christmas Story”, consisting of 12 consecutive airings of the film from the evening of Christmas Eve to the evening of Christmas Day annually. Conversely, A CHRISTMAS STORY has spawned the universally panned sequels IT RUNS IN THE FAMILY (or MY SUMMER STORY) and A CHRISTMAS STORY 2, released in 1994 and 2012 respectively. Is A CHRISTMAS STORY CHRISTMAS a worthy sequel to the beloved Jean Shepherd’s original, directed by Bob Clark?  Well, it’s complicated as trying to get a Red Ryder Carbine Action 200-shot Range Model air rifle for Xmas.

All the returning characters featured in A CHRISTMAS STORY CHRISTMAS are played by the actors/actresses of the original, minus the matriarch. The original actress (Melinda Dillon) is retired and the role is taken over by Julie Hagerty (Airplane!, What About Bob?). The lead character Ralphie is once again helmed by Peter Billingsley. In 2008, Ralphie is a happily married father of two children, working a decent salary but thankless job in Chicago. Ralphie has taken a year off

work to pen his manuscript, which has been rejected by 28 publishers. During his 29th rejection, we get to see that Ralphie’s overestimation of his own charm has not subsided with age after he attempts to bribe a literary agent with a store-bought gift basket. Later that evening, Ralphie receives far dire news: The Old Man (played in the original by the late Darren McGavin), has passed away. The scene of Ralphie holding his kids while his wife holds him in bed is poignant, for it establishes a strong family dynamic. The family embarks to Ralphie’s childhood home in Hohman, Indiana.

Although this story does not call for a high budget Warner Bros./HBOMAX allocated enough cash to fully replicate the neighborhood from the 1982 classic.  A movie fan with deep pockets purchased the original house and an adjacent home to rent out as an Airbnb, but one could hardly notice the subtleties. The decision to not show a funeral and rather have the characters reminisce about the old man is a smart decision. There is no need to have a Christmas film dampen the holiday spirits. Although grieving, Ralphie and his mother share quite a few humorous scenes, with the best being a sequence where they attempt to elude pesky Christmas Carolers. Ralphie’s wife  a lover of song and dance) cannot fathom why someone would want to avoid such jovial people; she’s played by Erinn Hayes. 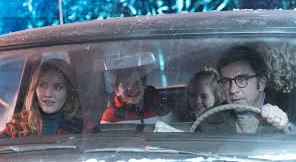 We get appropriate but somewhat unnecessary flashbacks to remind us of Ralphie’s childhood friends when they are reintroduced. Their adult versions are true to the nature of the original characters, but there is not much development here in characterization or aiding the plot. While writing his father’s obituary (a request from his mother), Ralphie has a series of unfortunate events transpire: 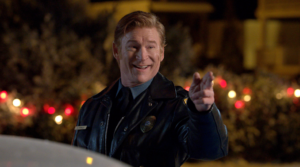 Yes…ole Scut Farkus (Zack Ward).  When last seen in A CHRISTMAS STORY, Farkus received one of cinema’s greatest and most deserved ass-kickings. Now Farkus is a police officer and apprehends Ralphie for “borrowing”  a Christmas tree star from a local tavern because all the stores were sold out of Christmas tree stars and Amazon Prime was in its infancy stage. The latter reason is not mentioned in the movie, and I am mentioning it as a reminder that this film is set in 2008, which also explains why everyone talks on a landline versus a cellphone. Given the predictable but heartfelt nature of this film, Officer Farkus lets Ralphie go, and Christmas is a success for the Parker family.  Even the stolen gifts were not an issue, for the late Mr. Parker had purchased and wrapped gifts a few days before his death. Spirits are further lifted after Ralphie’s father’s obituary is read by a newspaper that offers him a job as a full-time columnist.

All-in-all, A CHRISTMAS STORY CHRISTMAS is a decent film. Although not a necessary sequel,  people that adore the original can enjoy this with a younger generation. The predictable nature of the movie and the Deus-ex ending is not my main gripe. The narration and wild imagination scenes are incredibly distracting.  Yes, these are the best features of the original, hearing the main character narrate his childhood antics and daydreaming of stopping villains with his Red Ryder BB Gun. However, seeing and hearing a middle-aged man narrate and imagine wild adventures does not have the same effect as the 1982 original. Perhaps this should have been taken over by the children as a coping mechanism to deal with the loss of their grandfather and facing the Farkus bullies. Maybe I am just thinking too hard about this, after all, it is a family film, not a David Fincher drama. So I digress, I do not want to be an Ebenezer Scrooge. 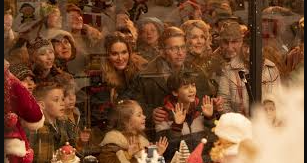 Go check out A CHRISTMAS STORY CHRISTMAS on HBOMAX.